For modern-day explorer RPCV Michael Fay, rain forest is his only home 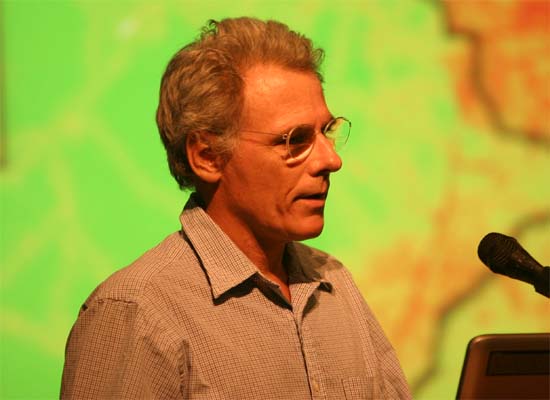 "I went to college in Arizona and studied ecology, botany, biology — things like that. I got my Ph.D. in gorilla ecology. I joined the Peace Corps in 1978 and went to Tunisia to work with national parks there. I went south after Tunisia to the Central Africa Republic and found everything I was looking for there."

For modern-day explorer RPCV Michael Fay, rain forest is his only home

For modern-day explorer, rain forest is his only home

Five years ago, J. Michael Fay walked 2,000 miles through the Central African rain forest. Two years ago, he embarked on another ambitious project: crisscrossing Africa, logging 70,000 miles, in a small plane fitted with cameras that snapped a digital image every 20 seconds to record the human impact on the continent's ecosystems.

Fay has what many people would regard as a dream job. He is an explorer-in-residence with National Geographic, a title he has certainly earned by risking his life to document and preserve equatorial Africa, one the remaining "wild" places on Earth.

"Passionate" would be a weak word to describe his commitment to alerting humans to their ongoing destruction of their own habitat and their responsibility to our entire planet and every living thing on it.

In his quest, he has been crushed and gored by an elephant. His 5-foot, 10-inch frame bears the scars of 13 tusk wounds. He has lived on fish caught in rivers and palm seeds for as long as five days after the food supply he carried ran out during a long trek. He survived a plane crash that cut a swath 150 feet long through the thick vegetation.

Fay is scheduled to visit the Twin Cities later this month as part of the "National Geographic LIVE!" series that runs through May and will feature presentations by four explorers. He is now in Africa watching elephants but visited recently with friends in California, where he spent a weekend hiking and camping in the "most geographically isolated" area he could find in Joshua Tree National Park.

While he was in California, he answered some questions about his life and experiences during a telephone interview:

A. I've been interested ever since I was a little kid. My family lived in California, and the interesting thing about growing up where I did was that on one side of our house was the L.A. basin, which had six times the particulate in the air that it does now, and on the other side was the San Gabriel Mountains, a wilderness area. All I ever did was go up in those mountains, and every day, I was confronted with the world of smog and the ability to climb above the smog. Even growing up, I thought: This is not sustainable.

Q. What path led you to the work you do now?

A. I went to college in Arizona and studied ecology, botany, biology — things like that. I got my Ph.D. in gorilla ecology. I joined the Peace Corps in 1978 and went to Tunisia to work with national parks there. I went south after Tunisia to the Central Africa Republic and found everything I was looking for there.

Q. Describe the Megatransect project, the punishing trek you undertook from Congo to Gabon.

A. I had realized there was this huge swath of forest to explore, the largest forest blocks still left in Africa. We walked for 456 days — I had about 12 people with me, 11 Pygmies who were forest people and one Bantu guy. We changed teams once along the way. We saw mammals that had never seen humans. We spent 2½ months just chopping through vegetation. We hit mountains 200 to 300 meters high. When we finally made it to the (West Africa) coast, I was very relieved we hadn't lost anybody, and I had seen everything I had ever dreamed of seeing. … The governments of Gabon and Congo have since decided to designate 10 percent of their forest as national forest, with no logging allowed.

Q. What about your airplane crash? When was that, and how did it happen?

A. I crashed in 1999, just before I took that long walk. I was cruising over these big mountains with nothing but forest below, and there was a screw-up, a mechanical problem with a tube that lets in air. … I said to the Japanese guy who was with me, "We're going to die today." But finally, someone communicated with me and gave me the location of an abandoned airstrip. It had these trees about three inches in diameter growing all over it. I flew over there and kind of put her down into these smaller trees. They snapped off like icicles and, miracle of miracles, there was this razorlike grass that acted like a net. Crazy. The plane was so covered over in vegetation, it was like a cave in there. It was two weeks before we could repair the plane and clear the airstrip so we could fly back out of there.

Q. But the crash was not your scariest experience?

A. No, I still go up in a plane, whereas I literally can't get up the courage to engage with elephants like I used to. Being kind of physically attached to an elephant was the scariest thing to happen to me. When you're holding on to tusks and wrestling with an elephant, you're thinking, "Oh, my God. This actually happened. Am I — or am I not — going to die?" I tried to stop her by yelling and screaming and waving my arms. Then, I started running. There was a lot of vegetation, and I immediately fell. I turned around, and she was already airborne. When I grabbed her tusks, we fell to the ground together. Her eye was about six inches away from my head; we were eye to eye. She tried to roll over on me and tried to crush me. I could feel this pressure was building and building and then I could feel ribs snapping. She tried to stab me and stab me, and finally she flicked me away. I looked down, and my pants were bloody. I had about 13 tusk wounds. Some of them went right through.

Q. You flew in a small plane at low altitudes, sometimes at less than 100 feet above forest canopy, to take the pictures for the Megaflyover project. What do the resulting images show?

A. That even if you go to a place like this, the most isolated and kind of undisturbed in people's minds, the human footprint is still just about everywhere. And most of Africa is still living off the land, without input of pesticides and herbicides, and drawing from aboveground water supplies. The land is being used but not beyond where people are living. They consume, on average, about 100 times less in resources than your average Westerner.

Q. What do you see as your mission in life?

A. More and more countries in Africa — Kenya, Tanzania and Mozambique among them — are taking resource management seriously, but the trend for use is growing faster than the conservation efforts. For example, at least 60 percent of the wildlife in Africa has disappeared in the past 30 years. Humans have to change their ecological strategy to one that is adapted to reality. Humans have to recognize that we really are the ones that determine the fate of this planet.

Q. How would you describe your lifestyle?

A. I'm certainly a nomad, literally a drifter. I don't have a house anywhere. I don't have a car, kids or a family. From that point of view, I have freedom. I spend enough time moving around that it doesn't even come up on my radar screen that I don't have this place where I go. When I'm in Washington (D.C.), I just sleep in my office. For me, sleeping is kind of like what a dog does. You curl up wherever you are, sleep as long as you need and then get up.

This story has been posted in the following forums: : Headlines; COS - Tunisia; Environment; Wildlife