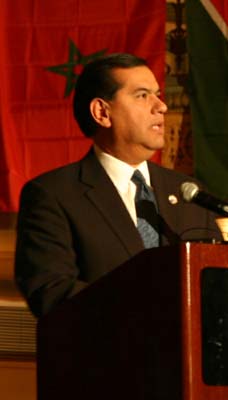 Sad news. We've failed once again to land a most excellent job in Rome -- as ambassador to the United Nations Food and Agriculture Organization, which is based in the Eternal City.

Someone even turned this job down, we hear, clearing the way for Peace Corps Director Gaddi Vasquez , who's now said to be President Bush 's pick.

The ambassador's office is on the Piazza del Popolo, site of the last public executions in Rome and not far from the Spanish Steps. It's an easy stroll for an exquisite lunch at Da Bologna, where the stars hang out. What better way to bring attention to world hunger?

Loop Fans may recall that Vasquez, a former Orange County official, announced "with mixed emotions," in October 2003 that he was leaving after only 20 months at the Peace Corps. But he never left.

Vasquez would replace former congressman Tony P. Hall (R-Ohio), who is being talked up as the next envoy for war-torn Sudan.

Unclear if Vasquez would continue Hall's annual Hunger Banquet, where some diplomats dined on water and rice, some on rice and beans and a select few had a fine meal, reflecting the proportion of those who eat well and those who don't.