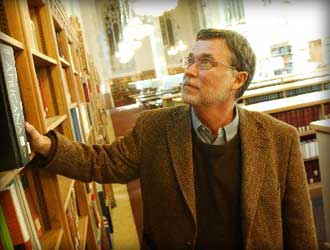 Thomalind Martin Polite still remembers the day she learned who she was and where she came from.

It was 1997 and she was home from college, visiting her family in Charleston, S.C., when a stranger dropped by to present her father with a chart of their family tree.

On that day, Thomalind learned that she was a direct descendant of a young girl stolen from the west coast of Africa, a slave bought by an ancestor of the man sitting in their living room.

The man was Edward Ball, a writer with a degree from Brown University, who had discovered Thomalind's past while searching through his family's papers. Ball's ancestors had owned nearly 4,000 slaves on 25 plantations on the Cooper River, not far from where Thomalind grew up.

The records -- old slave ledgers, letters and receipts -- showed that Elias Ball Jr. bought a 10-year-old girl in 1756. He named her Priscilla. She worked on the Comingtee plantation and died in 1811.

Ball was able to trace her children to a freed slave and Thomalind's father.

"He showed us all the documents and opened this big family tree and said, 'Here's Priscilla,' " remembers Thomalind.

Thomalind wasn't shocked. She knew she had probably descended from a slave. But her upbringing -- from early piano lessons to high school debutante -- was far removed from the legacy of slavery.

Her parents, Thomas and Rosalind, rarely talked about their ancestral past. What she knew about slavery came from school trips to plantations and half-remembered lectures.

In school, she recalls with a laugh, she "hated history."

But history was about to engulf her.

In l998, Ball's book, Slaves in the Family, came out. The story of the Martin family was in it. The book won the National Book Award for nonfiction, and Ball was invited to speak in Charleston. Thomalind's father died a month before the book was published; her mother placed a copy in the living room.

"What Ed Ball did was extraordinary," says Thomalind.

Not everyone was pleased.

Some Balls were unhappy that Edward had dredged up the family's slave-holding past.

And some of Thomalind's friends were upset.

"Several people told me, 'I wouldn't want a man to come to my door and tell me his family owned my family.' "

THOMALIND DIDN'T brood over the revelation.

She finished her studies for a master's degree in speech pathology and audiology at South Carolina State University, and moved home.

On June 19, 1999, she married her high school sweetheart, Antawn Polite. That same day, the newlyweds moved into a brick house in a comfortable neighborhood in North Charleston.

Two years later, they had a little girl and named her Faith.

Although Thomalind came from a family of teachers -- when her parents married in 1960, the headline in a local paper said "Charleston Teachers are Married" -- she wanted to do something else.

But her first job was as a speech therapist at a large elementary school of 500 mostly black and poor children. Attendance was so poor that the school gave bikes to students who came every day.

"You either love a school like Burns, or you run away," says Principal Bonnie Olsen.

In her windowless room, she taught children how to correctly pronounce words. She rarely thought about Priscilla.

BUT JOSEPH Opala could think of nothing else.

The anthropologist first heard about Thomalind's ancestral link to Priscilla when in 1997 he escorted Ball on a trip to Bunce Island, the British slave fort that, in the 1700s, sent thousands of Africans to Charleston and other ports.

Opala, who had spent 17 years in Sierra Leone, had twice arranged for slave descendants to visit Africa, once in 1989 and again in 1997. Both trips were featured in documentary films.

But neither homecoming offered what Thomalind could: a direct and documented link to Sierra Leone.

Opala was at work on a third film. He wanted Thomalind to play a central role by returning to Sierra Leone.

SO YET AGAIN, a white stranger knocked on the door.

In his hand, Opala had an invitation from the Sierra Leone government asking Thomalind and her family to come home.

"We understand that Mr. Ball has linked your family to a distant ancestor, a little girl named 'Priscilla' who was sent aboard a slave ship from Sierra Leone to Charleston in June 1756," the letter began.

"We understand that Priscilla passed through Bunce Island, the notorious slave castle in Sierra Leone, before being put aboard the ship Hare.

"Thus, there is every reason to believe that your ancestor, Priscilla, came from our country, and that Sierra Leone is your ancestral home.

"Therefore, on behalf of the Government and people of Sierra Leone, I extend to you our warmest fraternal greetings, and our invitation for members of your family to come home."

As a girl, she had been so sheltered that her parents had forbidden her to bike beyond Huger Street, the quiet palm-shaded lane where she grew up.

After a few minutes, she said yes.

She would go to West Africa,from where Priscilla had been kidnapped 250 years ago.

BUT HER story wasn't complete. There was yet another startling turn.

For years, Opala and Ball had assumed that the Hare, which brought Priscilla and 79 other slaves to America, was a British sloop, dispatched from Bunce Island.

Last August, while searching through slave records and letters in the New York Historical Society, Opala discovered that the Hare came from Newport and its owners were the well-to-do merchants William and Samuel Vernon.

Many of the letters had been written by the Hare's captain, Caleb Godfrey, to the Vernons, church-going brothers who had started trading in slaves and other goods years earlier.

The Vernon letters reflected their status: literate, elegant, penned in a steady hand. Godfrey's letters were crude, short, filled with misspelled words. There were so many slave ships going back and forth from Newport to Africa that Godfrey had little problem getting his letters delivered.

"I gasped," says Opala. "I was holding pieces of paper that were carried on that ship." Some of the letters, folded, contained wax seal stains and watermarks: the royal cipher, images of Britannia.

Opala also found an exchange of letters between the Vernons and the Charleston slave dealer Henry Laurens, who sold Priscilla to Elias Ball Jr., an in-law.

For Opala, Priscilla's story could now be told in a way that no other slave story could.

"It was a very rare discovery," he says. "The records Ed Ball found are amazing. But then to find the records of the slave ship that took that little girl to South Carolina . . . I was astonished. We can now track Priscilla's route from the day she left Africa to the day she was sold."

Opala thought it was important to get word of his findings to Newport. And he just happened to know someone who might help. In late 2003, Opala had met Valerie Tutson, a storyteller, at a black storytellers festival in Rhode Island.

Priscilla's story would make a great vehicle to tell the story of slavery in Rhode Island, he told her.

Tutson agreed and launched a grass-roots effort to raise money to send Thomalind to Africa and Newport, and to tell Priscilla's story. She called it "Project Priscilla: Bringing Rhode Islanders Together in an Act of Remembrance."

No one can argue with the facts.

The Hare made one of the more than 900 voyages from Newport to Africa during the 1700s. About 100,000 Africans were shipped by Newport traders to other markets.

THE STORY of Priscilla hasn't needed a media blitz to begin to seep into the state's consciousness.

In Providence, artist Bob Dilworth is finishing an imaginary portrait of Priscilla. The painting will be given to the Sierra Leone National Museum.

At Narragansett High School, 10th-grade history students have written reflective papers on slavery based on Priscilla's story. "I was pretty shocked," 15-year-old Victoria Smurro said after making a presentation. "When you think of slavery, you think of the South. You don't think of New England or Rhode Island."

In Newport, historian Keith Stokes is providing a colonial context for the Priscilla story. The trade helped both Newport and Charleston develop into major ports, says Stokes, president of the Newport Chamber of Commerce.

"This is an American story, about the building of an American economy. Our goal is not to just talk about this in February, during Black History Month."

IN DECEMBER, for the first time, Thomalind drove with a documentary filmmaker to the old Comingtee plantation on the Cooper River, less than an hour from her home.

Down a long, winding dirt road, the barren walls of the old mansion suddenly came into view. Trees grew from the dirt once covered by the home's wooden floor. Dead leaves covered the front steps.

Facing the mansion ruins, she wondered: Did Priscilla walk here?

"It's a feeling I can't really describe," she says of that first encounter with her slave past.

On a second visit to the old Ball plantation, Thomalind offered her thoughts on slavery, a topic she once had been reluctant to explore.

"Slavery was a horrible thing. It's painful to think about what the slaves had to endure. But it's a part of history, and you cannot change it.

"You cannot be accountable for what your ancestors did. You have to look at it, and learn from it, and move on together."

As for her mid-May trip to Africa, Thomalind says she has no idea how she will feel when she arrives. But, she says, "I can make people aware and help people heal. Not just me, but others."

In Africa, preparations for her visit are under way. The people of Sierra Leone will greet her with plays, songs and food, Opala says.

Thomalind will visit Bunce Island, the old slave fort, and walk on the jetty where Priscilla may have seen her home for the last time.

Because the people of Sierra Leone believe their ancestors live on, they will welcome Thomalind as the lost spirit of a little girl torn from her homeland many years ago.

Look back at the first two parts of "Priscilla: A slave story," or find related Web resources and more Black History Month features, at: