Giving not so easy: an orderly distribution of shoes in Nicaragua descended into a mob 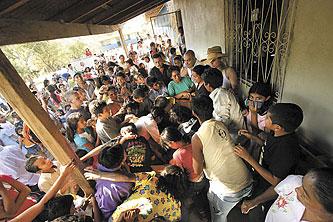 Giving not so easy: an orderly distribution of shoes in Nicaragua descended into a mob

'I should have known better'

On the flight back to California, Craig Cowan sat and stewed.

The day before, he gave away 1,000 shoes in a Nicaraguan village, but what he planned as an orderly distribution descended into a mob.

The pushing, the shoving, the mania -- Cowan vowed to never go back. But then he changed his mind.

In December, Cowan shipped almost 5,000 pairs of shoes donated by San Luis Obispo County residents to Central America. He planned to give them to Nicaraguan children who cannot attend school without shoes. Others doing charity work in Nicaragua, especially a local orphanage director named Peder Kolind, had warned that the giveaway might be more difficult to manage than Cowan thought, but he overlooked their counsel in his zeal to help.

Most of the shoes landed in good hands. He gave 1,000 pairs to a charity in Costa Rica and left almost 3,000 with organizations in Nicaragua. But the unruly throng that appropriated the rest in the mountain village of Tepeyac frustrated Cowan immensely.

The entire project, which sprang from his 9-year-old son Cole's desire to help barefoot children in Central America, was riddled with obstacles: shipping delays, problems with customs, bureaucracy. Cowan finally took control of the shoes destined for Nicaragua on the last day of his 30-day visit and then tried to distribute 1,000 pairs in one chaotic afternoon.

The first 200 went to people who might actually wear them, but the remaining 800 were probably quickly sold -- for food, he hoped, but perhaps for drugs or something desirable like a cell phone.

"I applied our values" to the villagers, he reasoned. "We showed them more than 1,000 pairs of shoes, we showed them all this wealth, and I think human nature -- a flight-or-fight mentality -- took over.

"We have to take some responsibility for what happened," Cowan continued, referring to himself and those who helped with the giveaway. "We were told by a professional how to do it, but we wanted to be nice guys."

He did not understand what the shoes meant to people who sometimes run out of food -- people like 9-year-old Alejandra Mendoza, who received a new pair of shoes for the first time in her life.

Cowan spent part of an afternoon with the girl, her family and her friends, touring her dirt-floored house and helping her pick fruits off the trees in her jungle clearing. He'd never been in the house of people so destitute.

"It's hard for Americans to appreciate the level of poverty there," he said. "It's hard to realize that a pair of shoes can feed a family for a week."

Hauling the donated shoes to Central America had cost Cowan about $10,000 and months of his time. But as he sat on the plane, Cowan realized that he wasn't coming back empty-handed: he was returning with a better understanding of need and a greater sense of compassion.

Even though he'd encountered unimaginable problems, the man had accomplished the goal he and Cole set in the fall.

Collecting 5,000 pairs of shoes in six weeks -- or about 115 pairs a day -- was no easy feat. Shipping them across thousands of miles and giving them to people who, for the most part, needed them, was inspiring.

Filled with renewed hope, Cowan began making plans to return in 2006 with four times as many shoes.

Next time, he'll arrange shipping differently. He'll have an assistant escort the shoes through customs weeks beforehand -- and with paperwork signed by the right authorities. He'll distribute over the course of two weeks with the help of the nonprofit contacts he developed in the area, and he hopes others will help him support a foundation for mentoring, youth programs and scholarship funds.

Cowan's even thinking of selling his communications company to devote more time to the project. There is a year to iron out any kinks.

"He experienced what all of us in international development experience: the trial-and-error approach to doing good," McMahon said. "In many cases, they're problems that other organizations have experienced, but in some cases, they're not foreseeable."

He told of poor villagers who once received a donated tractor that made farming easier and more efficient. Soon they relied on it -- but when the tractor broke down, the villagers couldn't afford repairs. Unable to farm without it, they were worse off than before.

His point: Giving is easy, but giving in a way that does the most good is difficult.

In mid-January, Cowan received an e-mail titled "Hell in Granada" from charity director Donna Tabor, with whom he had left 2,000 pairs of shoes to distribute.

"There are no words to describe the chaos that has taken over here -- it's akin to anarchy," she wrote. "Every time I'm in the (warehouse) trying to organize the shoes and distribute to part of the mile-long lines outside, pandemonium breaks lose."

People flattened her truck tires and tried to break down the warehouse door. They found her house and threw stones at the windows, demanding shoes, she said. But she eventually distributed to a women's center and to Peace Corps volunteers.

"It went very smooth," he wrote in a late-January e-mail to The Tribune. "We gave away 572 pairs. We cordoned off the open-air part inside (the facility) and let 25 children at a time look from behind the rope at approximately 200 pairs of shoes spread out on the floor. Then an adult walked between the shoes to select the pair the child wanted. Then some other adults (10 of them) tried the shoe on the children's feet in a designated testing area."

If the pair fit, an adult painted the child's thumb and asked him or her to leave the center. This ensured each recipient received only one pair because those with inked thumbs weren't allowed back into the orphanage.

"It all worked very well and the children -- and adults -- were very grateful," Kolind wrote. "And so was I, because we found a way by which we can distribute many other things in an orderly fashion."

Many involved in aid work say a shift in perspective -- and an understanding of what it's like to live in poverty -- is critical to successfully distributing donations.

"There's not a lot in (the United States) that really forces you to look at poverty," said McMahon. "We see signs of it in the news that's coming out of areas hit by the tsunami, but if you don't want to see the poverty in the world, you don't have to."

American Red Cross relief organizer Kim Guymon said that her organization couldn't have done much with the thousands of shoes donated by local residents. In some ways, she suggested, Cowan has developed a niche charity.

"The thing with shoes and clothing is that it's so hard to go through it, to get it sorted and cleaned," she said. "It's even more expensive to get it to where it needs to go."

Her organization is more apt to buy items in the local community, which in turn benefits the economy. Cowan's drive was a success, however, because it depended not on money but on shoes that children quickly outgrow. A 12-year-old is far more likely to donate an old pair than a week's worth of allowance.

"The great thing with organizations like his is that they're there to pick up what we can't do," Guymon said. "If people want to donate used clothes, used shoes, and if they have that outlet, well, that's great."

In the end, Cowan's faith in the ultimate good that comes from helping Central American children remains undaunted.

"When you have kids, you think back to when you were a kid and didn't have to worry about life's issues," he said. "But these kids have to worry about feeding themselves. These kids don't have a childhood, and I figure we could help them out and maybe give them some of that back."

He may get another return on his investment.

His son, Cole, says that when he grows up, he wants to do charity work.

This story has been posted in the following forums: : Headlines; COS - Nicaragua; Giving