Paul Timmreck, senior vice president of finance and administration at Virginia Commonwealth University, got his start in public service by trailing garbage trucks through the streets of Venezuela 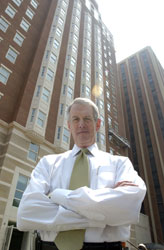 One of his biggest accomplishments in the Peace Corps, as the decade of the'60s dwindled to a conclusion, was developing a modern garbage-pickup system for Maracay, Venezuela, now a city of half a million people. The project exposed Timmreck to the upper crust of society, partying with politicians, business leaders and the nation's greatest heroes, bullfighters. But he also dipped into depths of that society, riding through the streets with street sweepers and listening to the concerns of laborers who worked on the garbage trucks.

Paul Timmreck, senior vice president of finance and administration at Virginia Commonwealth University, got his start in public service by trailing garbage trucks through the streets of Venezuela

VCU's Timmreck to retire in 2006
Senior vice president has been a key figure at the university and in state government, too

Paul Timmreck, senior vice president of finance and administration at Virginia Commonwealth University, says the upcoming school year will be his last at VCU.Photo: CLEMENT BRITT/TIMES-DISPATCH}

He kept four governors on budget, helped lead the biggest expansion in the history of Virginia Commonwealth University and holds the future of state employees in his hands as board chairman of the state retirement system.

But he got his feet wet in public service by trailing garbage trucks through the streets of Venezuela.

"I got my start in garbage," said Paul Timmreck. "It is an experience I'll always remember. It changed me forever."

Timmreck, 60, is senior vice president of finance and administration at VCU and has been President Eugene Trani's right-hand man for the past nine years, a time of unparalleled growth at the 29,000-student university.

He has announced that this will be his final year and hopes never to hold a full-time day job again. He's thinking about consulting, lending his experience to those who might profit by it.

Timmreck's Venezuela adventure came during his two years in the Peace Corps after graduation from the University of Michigan with undergraduate and master's degrees in public administration in 1967 and 1968.

One of his biggest accomplishments in the Peace Corps, as the decade of the'60s dwindled to a conclusion, was developing a modern garbage-pickup system for Maracay, Venezuela, now a city of half a million people.

The project exposed Timmreck to the upper crust of society, partying with politicians, business leaders and the nation's greatest heroes, bullfighters.

But he also dipped into depths of that society, riding through the streets with street sweepers and listening to the concerns of laborers who worked on the garbage trucks.

Those experiences helped draw him out of an introverted personality.

There was also this: "When you're 6-foot-4 and live in a nation where the average height is 5-foot-8, you stick out," Timmreck said.
Peace Corps experience

Timmreck was attending the University of Michigan when college campuses were boiling over social issues. He said President John F. Kennedy's assassination and the emergence of the civil-rights movement had a strong impact on his outlook.

He decided to enter the Peace Corps out of a desire for public service and for travel. Besides making him less introverted, his time in Venezuela changed Timmreck in ways he had not anticipated.

"I came back more conservative," he said.

"When you see how desperate people are for jobs and are willing to take any job, it really gives you a profound amount of gratitude for how well-off we are as a nation and what the work ethic is really about."

Timmreck met his wife, Jennifer, who is a former teacher, on a blind date. She said he was quiet and she wasn't. The 33-year match has produced two children, Mark and Emily.

He and his wife came to Richmond in 1975, when Timmreck took a job with the Joint Legislative Audit and Review Commission -- the General Assembly's watchdog -- for which he worked five years.

Later, Timmreck would serve as the director of planning and the budget for Govs. Charles S. Robb and Gerald L. Baliles. Then he was state secretary of finance under Govs. L. Douglas Wilder and George Allen.
On-the-job training

In 1996, Trani began recruiting him to come to VCU.

Trani said an adviser had urged him to find someone who could keep him on track financially as he pursued a vision of growth at the then-struggling urban college.

The VCU president said he did not want to end up the same way that another Richmond "visionary," whom he declined to name, had ended up.

That person was Frank Jewell, whose efforts to establish a high-profile $23 million museum and park on the James River -- Valentine Riverside -- ended in 1995 when the museum closed with huge debts and Jewell resigned.

Timmreck said that when Trani offered him a job, he instinctively thought it would never work.

"But I was curious enough to drive around VCU at night," Timmreck said.

He was greeted by visions of aging buildings, an often incoherent arrangement of facilities, and a lot of unmet needs.

"I went down Main Street, eastbound on West Franklin, up Harrison.

Timmreck took the job and began gathering a team and learning how to pull the handles to make things work.

He had never been in the operational side of things when he was in state government, and Timmreck said he had a lot to learn.

His wake-up call came early one morning when a parent phoned him to report that there was not a security escort for his daughter at 11:30 p.m. the night before on VCU's Medical College of Virginia campus.

"I said, 'Whoa, that's my responsibility. You have the responsibility for the safety of all these people,'" said Timmreck, who has the VCU chief of police reporting to him.
'Can-do' attitude

After the Sept. 11 attacks, the university created an additional position for Timmreck: "incident commander."

He was in charge of the team that would coordinate the university's response to disasters and emergencies.

Timmreck led the university's responses in September 2003 to power outages and damage caused by Hurricane Isabel and in March 2004 to an enormous fire that nearly consumed a student dormitory under construction.

But helping to lead VCU's capital expansion has been Timmreck's biggest challenge.

In July 1996, the VCU board of visitors adopted a new growth plan that included spectacular expansion along Broad Street. Timmreck was brought on at the same time to help find ways to pay for that growth, which has totaled more than $100 million on Broad Street alone.

During a recent board of visitors meeting, VCU's president praised Timmreck for steering the university through a period of historically strong expansion -- student enrollment has increased more than 30 percent -- even when state aid was cut 25 percent.

"Under Mr. Timmreck's leadership, we've pushed through with a 'can-do' attitude. It's been quite a run," Trani told the board.

Currently, Timmreck is helping oversee development of the $200 million Monroe Park Addition. The project, planned for a 10-acre area east of Belvidere Street, will include construction of a business school, an addition to the engineering school, a new home for the university's No. 1-ranked advertising program and dormitories.
Fishing 'a great escape'

Timmreck has said one of the reasons he wants to leave VCU at the end of the upcoming academic year is so he will have more personal time.

Fishing is one of his passions.

Brown said Timmreck took up fishing for a specific and unselfish reason.

"He wanted to find something he could share with his son," he said.

Brown said he and Timmreck have often fished for smallmouth bass in the James River and for trout in mountain streams.

Several years ago, Brown said, Timmreck took up fly fishing and has worked hard to perfect the casting that characterizes the sport. He also ties his own flies or lures.

"It's a great escape, and he can work on it all year long," Brown said.

Timmreck also owns a fishing boat with retired Justice Sam W. Coleman III of the Virginia Court of Appeals. Coleman said he was reluctant to buy a boat at first because he is terrible at anything mechanical.

But he said he found "the perfect marriage" when it came to co-owning a boat with Timmreck.

"Paul is a little compulsive," Coleman said with a laugh.

The judge said Timmreck relishes maintaining the boat meticulously, and Coleman said the closest he comes to maintenance is when Timmreck sends him a bill.

Like Timmreck, Coleman says he's on the introverted side and their time together is usually quiet, unless they have one of their raucous friends along.
Outdoor enthusiasts

Jennifer Timmreck said she and her husband like to spend time on the water and walking through the woods at their home in Goochland County. She hopes to do more of that once he leaves public service.

"It's been a long haul at a pretty intensive pace," Timmreck said of his three decades of working for the state and at VCU at the highest levels.

"None of us are getting any younger. If you have pursuits that require physical stamina, you need to do these things while you can," he said. "Inevitably, time goes by faster and faster."

This story has been posted in the following forums: : Headlines; COS - Venezuela; University Administration