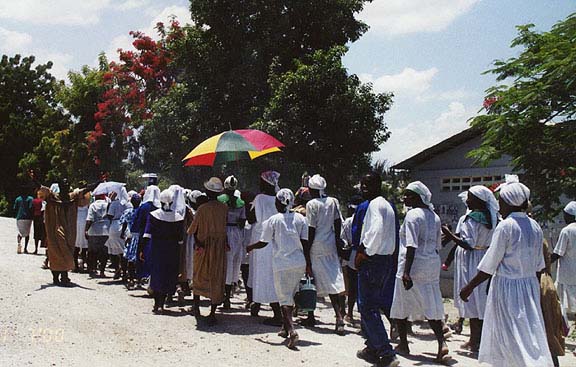 "I visited Haiti in December of 2004 and saw first-hand the positive impacts Peace Corps volunteers have made throughout the years," said Director Vasquez. "It is with tremendous regret that the Peace Corps is suspending its program at this time given the current safety environment in Haiti."

All Peace Corps volunteers have safely left the country.

The Peace Corps will continue to assess the security conditions in Haiti and will consider reopening the program in the future.

More than 400 Americans have served as volunteers in Haiti over the years. The Peace Corps work in Haiti spans three separate periods of time: 1982 to 1987; 1990 to 1991; and 1996 to present. At the end of the first two periods, volunteers were evacuated for safety and security reasons due to political instability and the program was closed. In February 2004, the program was suspended for six months due to political instability; however, a small number of volunteers returned when the program reopened in August 2004.

The most recent group of volunteers were working in HIV/AIDS education and prevention with the Centers for Disease Control and various non-governmental organizations in support of the President’s Emergency Plan for AIDS Relief. Agriculture volunteers have helped address poverty, unemployment, and environmental degradation by assisting organizations through programs in agroforestry, agricultural extension, agribusiness, microcredit, and community development. Peace Corps volunteers have also helped create and sustain small business opportunities for the rural poor, improving their access to financial services. In addition, health volunteers worked with women and children, stressing the importance of immunizations, sanitation, and child and maternal health.

This story has been posted in the following forums: : Headlines; COS - Haiti; Safety and Security of Volunteers

TO WHOM IT MAY CONCERN,
I WOULD LIKE TO KNOW THE CRITERIA TO VOLUNTEER IN HAITI.