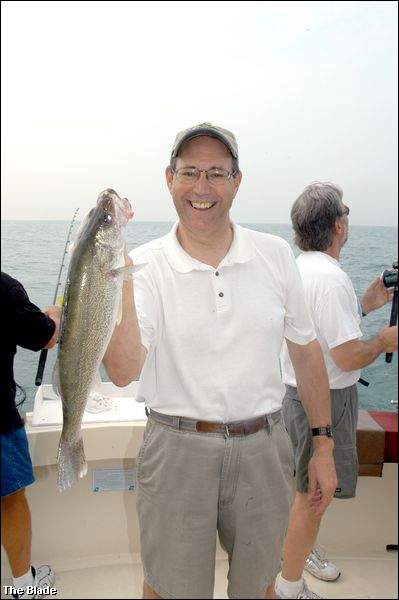 Ohio Governor Robert Taft served as a Peace Corps Volunteer in Tanzania in the 1960's.

Caption: Gov. Bob Taft shows off one of the walleye he caught yesterday on Lake Erie.

PORT CLINTON — Gov. Bob Taft took a day off from the political battlegrounds yesterday and went walleye fishing to promote western Lake Erie tourism. He came away with positive thoughts about the fishery’s future.

“I met the entire class of 2003,” the governor quipped to an assembled audience of invited guests. He was referring to the scores of 2003 walleye caught by his fishing party and other boats at the 27th annual Governor’s Fish Ohio Day.

The 2003 fish currently are just slightly undersized, most ranging just three-quarters of an inch or less below the minimum keeper length of 15 inches. As a result, virtually scores of eager walleye had to be returned.

Nonetheless the governor’s party, fishing aboard Keith Unkefer’s 41-foot Pooh Bear, did manage to ice about six legal fish up to 24 inches among about 70 walleye, plus yellow perch, white bass, sheepshead, and a 12-inch steelhead trout. The crew trolled with small, brightly painted, hammered copper spoons called, of all twists for Buckeye anglers, Michigan Stingers.

Fish Ohio Day, aimed at promoting the lakeshore region and its famous sport fishery, brings together local and state tourism and fisheries representatives, legislators, outdoors media representatives, and members of the Ohio Department of Natural Resources administration and staff.

The event is jointly sponsored by the Ottawa County Visitors Bureau, the Lake Erie Charter Boat Association, and the Ohio Division of Wildlife.

“Every time I come up here I’m just blown away by what a unique-in-the-world fishery we have on our doorstep,” the governor said. “The efforts to restore the lake and to conserve and perpetuate the sport fishery makes Ohio very special.”

It is because Lake Erie is such a premium natural resource that he and his director of natural resources, Sam Speck, have labored so long on cooperative agreements supporting Great Lakes water quality and water quantity, the governor said.

“It drives home the importance to protect [long-term] the quality of the lake and the fishing experience,” Taft added.

Speck, in his turn to address the assemblage, reinforced the state’s intent to strongly oppose any attempt by the Oklahoma-based Ottawa tribe to claim a portion of North Bass Island, with an eye to establishing a tribal commercial fishery.

The Ohio Department of Natural Resources recently purchased 589 acres, or 87 percent of the island, for use in part as a low-impact state park.

“We have a controversy brewing over keeping our park on North Bass Island,” Speck said, referring to the potential tribal takeover of at least some of the island under a 19th-century treaty. “This administration is not going to stand still for that.” Nor will it stand for netting of walleye — by anyone.

Commercial fishing for walleye has been banned in Ohio waters of the lake for more than 20 years, and a handful of remaining trapnet fishers are under the gun in a scandal over gross underreporting and subsequent commercial sales of yellow perch catches.

A Cuyahoga County grand jury recently handed up 23 felony indictments in connection with the perch takings, and additional grand juries may be impaneled in other counties in a continuing state investigation.

The proposals would include returning the daily creel limit for walleye to four, up from the current conservative three, during March and April. The limit would remain six the rest of the year, and a 15-inch keeper minimum size also would remain as a way to conserve the huge 2003 year-class.

The proposals would “get the most benefit from Lake Erie,” said Steve Gray, state wildlife chief. “We’re convinced the 15-inch limit is working.”

In addition, the use of treble hooks, now banned in March and April in Sandusky Bay, would be allowed in lower Sandusky Bay — in the vicinity of the city of Sandusky and Cedar Point. The chief said the relaxed area restriction is proposed in response to concerns that it has hurt bass fishing and tournaments in the lower bay.

He noted, however, that the treble hook ban would remain intact around the cross-bay bridge area and upper bay, where walleye stage for spring spawning runs up the Sandusky River. Springtime use of treble hooks is banned in the Sandusky and Maumee rivers and Maumee Bay as well to curb illegal snagging, or foul-hooking.

Lastly, the yellow perch daily creel limit would be increased from the current 30 to 40 a day. The more conservative limit was set about 10 years ago to help conserve then-faltering perch stocks, which since have recovered well.

“Perch are doing great from Conneaut to Toledo,” the chief said. “We want to make sure sport anglers get their share.”

This story has been posted in the following forums: : Headlines; Figures; COS - Tanzania; Politics; State Government; Environment; Fishing