Colombia RPCV Chic Dambach, president and C.E.O of “Operation Respect: Don’t Laugh at Me," addresses the problem of antisocial behavior among the young 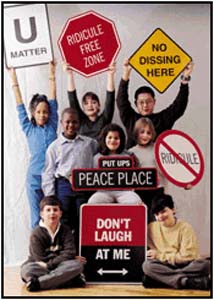 “Don’t Laugh at Me” (or dlam) was born when Peter Yarrow—a veteran of the civil-rights, gender-equality, nucleardisarmament, peace, and Amtrak-subsidization movements—heard a country ballad of that name at the Kerrville Folk Festival, in the summer of 1999.

Colombia RPCV Chic Dambach, president and C.E.O of “Operation Respect: Don’t Laugh at Me," addresses the problem of antisocial behavior among the young

The problem of antisocial behavior among the young has become so prevalent in Britain that a Blair official recently proposed forcing miscreants to wear bright-orange jumpsuits. New York City, on the other hand, seems to prefer, in these post-Giuliani years, to be an avatar of positive reinforcement: the esteem-affirming Athens to London’s hard-nosed Sparta. Over the course of the next year, the Department of Education will introduce into all of its elementary and middle schools “Operation Respect: Don’t Laugh at Me,” an intensive curriculum in character development. The program, which is the brainchild and heart’s desire of Peter Yarrow, of Peter, Paul & Mary, aims to combat bullying by emphasizing the moral lessons of folk music.

“Don’t Laugh at Me” (or dlam) was born when Yarrow—a veteran of the civil-rights, gender-equality, nucleardisarmament, peace, and Amtrak-subsidization movements—heard a country ballad of that name at the Kerrville Folk Festival, in the summer of 1999. Moved to tears by its swelling harmonies and first-person testaments to the effects of ridicule—“I’m a little boy with glasses, the one they call a geek / A little girl who never smiles ’cause I’ve got braces on my teeth”—he decided to incorporate the tune into Peter, Paul & Mary’s repertoire. At a gig with the National Association of Elementary School Principals, the group played the song. “The principals gave a tremendous response to it, and said, ‘We need this in our schools,’ ” Chic Dambach, Operation Respect’s president and C.E.O., said the other day. “And Peter, being the activist and the organizer that he is, said, ‘You won’t just have a song but a whole program.’ ” dlam is now used in at least twelve thousand American schools and camps.

A couple of Tuesdays ago, at a fusty Department of Education building in Brooklyn, Lynne Hurdle-Price and Mark Weiss, conflict-resolution experts, led a dlam training session for about two dozen middle-school teachers, whom they divided into five groups. “I want you all to share a time in your career as an educator where someone did or said something that made you feel like you were not cared for or respected,” Hurdle-Price said. Each teacher spent three minutes sharing. “Now do the opposite.” Hurdle-Price distributed paper and Magic Markers. She asked each group to draw an outline of a human figure, inscribing negative behaviors (“put-downs”) on the outside and positive behaviors (“put-ups”) on the inside, close to the heart. Each group then presented its finished product, a Caring Being, which, according to the dlam teacher’s guide, would help the participants to “explore creating agreements around behaviors.”

“This is Mr. Smith,” one teacher said, holding up an illustration of a man with a porkpie hat and a handful of flowers.

Weiss unfurled a poster of a human outline embellished with Chinese characters and said, “This is Caring Being in Cantonese.”

On to dlam’s outreach video. The tape included accounts of book-slamming, sandwich-spitting, and shin-kicking, as well as footage of a rendition of “Don’t Laugh at Me” that Yarrow had performed at the United Nations. “A ridicule-free world,” a soothing voice intoned. “It’s possible, but only with everyone’s help.” (dlam’s efforts at enrichment may also extend to Peter, Paul & Mary’s back catalogue. Page 22 of the teacher’s guide instructs: “Tell students that this version of the song ‘Don’t Laugh at Me’ is sung by Peter, Paul & Mary. If you have not already done so, tell them a little bit about the group. . . . In the early 1960s, Peter, Paul & Mary were the #1 recording group in the country.” )

Next up was “The Big Betrayal Conflict Script,” a skit about two friends, Terry and Sasha, who get into a fight at a basketball game. The exercise emphasized using “I messages,” as opposed to those that begin with “you” and, therefore, can put their targets on the defensive. (dlam also recommends having students simulate the sound of a rainstorm and discuss a story called “The Maligned Wolf.”)

“Just make sure they’re sticking to the formula,” Hurdle-Price advised. “I often get students who say, ‘I feel that you are stupid.’ ”

Later, the class broke for lunch. A very tall woman in a hunter-green suit lingered. Her name was Anelien Venter. An education specialist from Cape Province, South Africa, Venter had discovered Operation Respect on the Internet and had come to the United States to spend two months studying it. She had already taken it upon herself to translate many of the program’s materials into Afrikaans, tweaking certain cultural details. “I have Terry and Sasha, for instance, fighting at a rugby match instead of a basketball game,” she said. She reached into a tote bag and pulled out a binder with a clear plastic cover: “Projek Respek Werkswinkel.”

This story has been posted in the following forums: : Headlines; COS - Colombia; Service; Youth