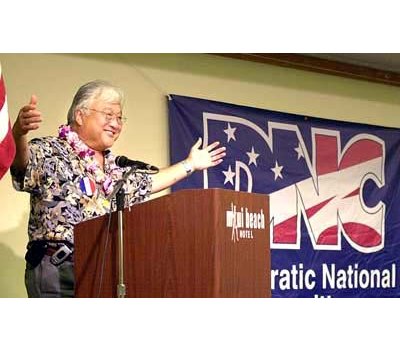 "We want to go back to our base and let you know we messed up, we took you for granted, we’re sorry and we want to connect with you again." Congressman Mike Honda of California served as a Peace Corps Volunteer in El Salvador in the 1960's.

Caption: Congressman Mike Honda greets the Maui crowd with open arms at the beginning of his speech Tuesday afternoon at the Maui Beach Hotel. “You cannot capture the White House without the grass roots,” he said, emphasizing the national party’s focus on maintaining its connections to local chapters. Photo: The Maui News / AMANDA COWAN

KAHULUI – The Democratic National Committee is trying to get back to its roots and reinvest in its local chapters, DNC Vice Chairman Mike Honda told Maui Democrats Tuesday.

He pledged that the national party would stop treating solidly Democratic states as sources of funds for presidential campaigns, and instead focus on leading and galvanizing Democrats “precinct by precinct, county by county, state by state.”

“We want to go back to our base and let you know we messed up, we took you for granted, we’re sorry and we want to connect with you again,” the California congressman told a luncheon crowd of about 175 at the Maui Beach Hotel.

For its part, the DNC is sending Democratic leaders like Honda to spread the word and gather information from local party chapters, and in Hawaii it has proposed funding four paid local staffers to help run the party.

And the role of party Chairman Howard Dean is being redefined from that of fundraiser to leader and pacesetter, said Honda, who described the party as undergoing a “paradigm shift.”

Honda, who is meeting with party chapters throughout the state, was greeted with a standing ovation and a warm reception by Maui Democrats.

“I’m very impressed with his grass-roots experience in the community,” she said, citing his background as an educator and his work with immigrants.

The people of Hawaii have embraced Honda as one of their own, she added, with many local Democrats asking him to move to Hawaii and run for office.

As he greeted the Maui crowd, Honda said the state’s welcome was “overwhelming” and that he felt right at home.

“There’s a lot of people here who look like me,” he said, referring to Hawaii’s racial diversity.

Honda praised Hawaii Democrats for bouncing back in the 2004 election and reclaiming seats in the state Legislature.

“At the state and local level, the Democratic Party has been a success,” he said.

The national party needs to connect with that spirit, he added.

“You cannot capture the White House without the grass roots,” he said.

Honda, who was confined with his family in a California internment camp during World War II, said an atmosphere of “racial prejudice, war hysteria and the failure of political leadership” led to the internment of Japanese-Americans, and that such persecutions should not be allowed to happen again.

But he said the same climate exists in the wake of the 2001 terrorist attacks, and that Republicans are not listening to Democrats’ message of moderation and civil rights.

“This country’s about all of us,” he said. “All of us should be included in this country, and I have to tell you it’s not happening.”

Taking questions from audience members, Honda said that documents showed there was “collusion” between President George W. Bush and British Prime Minister Tony Blair months before the war in Iraq. Asked if Bush could be impeached for taking the country to war, Honda said more information was needed but added, “My personal opinion? Yeah.”

On the issue of job outsourcing, Honda said the problem was complicated, because many Americans aren’t willing to pay more for locally made products.

He felt companies should be required to meet certain conditions before being allowed to move jobs overseas.

“It’s not the most popular answer for Democrats, but it’s the most honest answer I have for you,” he said.

Asked why Democrats weren’t more outspoken in responding to the Republican message, Honda replied that as members of the minority party, they didn’t have the “pulpit.”

He urged party members to turn to the Internet for information and communication, saying independent online media could give minority groups a voice.

“Just because you don’t see it on the mainstream news doesn’t mean they’re not saying something,” he said.

Ilima Loomis can be reached at iloomis@mauinews.com.

This story has been posted in the following forums: : Headlines; Figures; COS - El Salvador; Politics; Congress