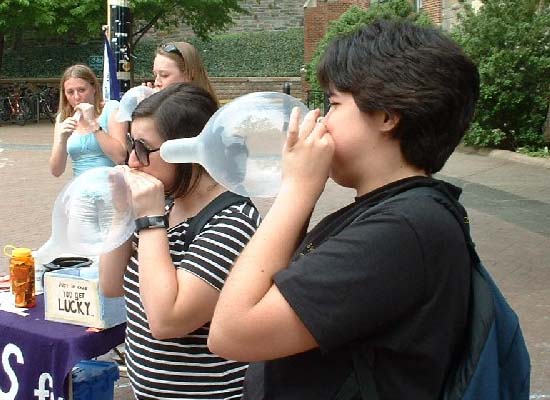 Caption: The photo is for illustrative purposes only and is *not* Betsy blowing up a condom.

So I may have made my second television appearance on Friday at “Youth Day”. This time, no words were necessary. I believe the shot they have is of me blowing up a giant condom, which would later by filled with water. I was in charge of coming up with games to play to attract people to our booth. So why not a water “balloon/condom” throwing contest?! which I may say did create a lot of attention.

***NOTE: condoms are not as easy to throw as one would expect. They are indeed quite lubricated, and sometimes slip out of ones hands and come dangerously close to hitting unsuspecting babushka’s sitting on nearby benches.

We also played a game where people had to pop a condom and answer a question re: AIDS inside…which after people stopped running away from us thinking that the loud pops were not gun shots, was also a success. The irony of all of these games was that they took place about 200 yards from the window of the Government official (crazy man who insisted that I just speak Kazakh) who I promised I would do my best to teach abstinence and not just give out condoms….whoops. Thus far my visa has not be revoked, but maybe he just hasn’t seen the evening news yet...

This story has been posted in the following forums: : Headlines; COS - Kazakstan; Blogs - Kazakstan; AIDS, HIV; AIDS Education