As a fresh Peace Corps volunteer in the fall of 1970, John Beasley traveled thousands of miles with his wife to the islands of Micronesia 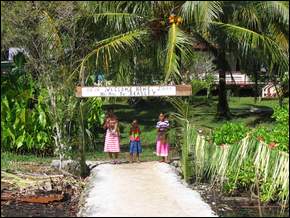 As a fresh Peace Corps volunteer from the Midwest, John Beasley traveled thousands of miles with his wife to the islands of Micronesia. They had no idea what to expect. But after serving about two years there, they formed lasting friendships that have transcended distance, language and cultural barriers.

As a fresh Peace Corps volunteer in the fall of 1970, John Beasley traveled thousands of miles with his wife to the islands of Micronesia

Caption: A group of children welcome John and Pen Beasley upon their arrival to Onei, Chuuk, back in March this year. The Beasleys had volunteered there with the Peace Corps 30 years ago. Photo courtesy of John Beasley

For Wisconsin natives John and Pen Beasley, a trip to Micronesia 35 years ago became a life-changing experience -- not just for them, but for the people they encountered.

As a fresh Peace Corps volunteer from the Midwest, John Beasley traveled thousands of miles with his wife to the islands of Micronesia. They had no idea what to expect. But after serving about two years there, they formed lasting friendships that have transcended distance, language and cultural barriers.

Among the many people they have touched was Yigo resident Joanna Fritz.

Born and reared in Chuuk, Fritz was 7 years old when the Beasleys arrived to her island of Onei in the fall of 1970.

"We really wanted to touch their skin because it was so white," she said.

As a physician, John Beasley's primary job was to keep other Peace Corps volunteers healthy. His duties were expanded to include serving as a doctor on Pohnpei and Majuro. He also volunteered at the Chuuk Medical Center where Pen worked in the outpatient recovery area.

The couple quickly found themselves embraced by the culture, the life and the people of Chuuk, including Fritz and her family.

"I remember every morning I went to (the Beasley's) house, which was close to my school," she said. She smiled as she remembered her time learning from the Beasleys and watching them interact with her family and friends. "They were really good to my mom and they helped a lot of people."

But helping people did have its challenges, with the culture, language, technology and infrastructure on Chuuk so different from the world the Beasley's left behind.

But the challenges the Beasley's encountered during their volunteer efforts also became wonderful memories.

"I was called in the middle of the night," John Beasley recalls. "A woman was going to deliver and I was trying to communicate in my very best Chuukese. It roughly translated into 'You pain big bad much?' She sighed and said in perfect English, 'You know, the contractions are really picking up,'" he says, laughing. The woman spoke fluent Chuukese, English and Pohnpeian.

But two years of being wrapped up in a warm culture made going back home much harder, especially because not many people in the U.S. mainland knew what or where Chuuk was, they said.

"All of a sudden everything you have done for two years in your life is irrelevant," he said in an interview from his home in Wisconsin, after visiting friends and former Peace Corps members in Hawaii and Micronesia earlier this year.

"Your life changes, priorities change, what you do changes," he said.

Leaving Chuuk was also difficult because of all the relationships they formed there.

"It was a wrenching, painful experience to leave these wonderful people we had come to love as our own family," John said.

"I never thought I would see them again," Pen said, "but I never forgot their faces."
A new experience

The feeling was mutual. John and Pen's warm smiles flashed annually through Joanna's memory when presents shipped from Wisconsin never failed to arrive before Christmas each year.

But probably the best presents they ever received were plane tickets to Wisconsin, which the Beasleys sent. The ticket was for Fritz's sister.

She was the first among several youths from Chuuk whom the Beasleys have sponsored to stay with them and provide them with an education, including four of Fritz's brothers and sisters.

After a few years, she both returned to Chuuk with stories, pictures and many unimaginable experiences for Joanna.

Joanna never dreamed it could happen to her. Then one day, 10 years after the Beasley's departure, Joanna, then 17, and her brother, Paco, were presented with two airplane tickets that landed them in Wisconsin in June 1982.

"It was really cold," she said of her first impression of the summer months in the Midwest.

"The family was there to meet us with jackets and sweaters. (The Beasleys) were wearing shorts and T-shirts. We wore jackets," she recalled laughing.

Joanna spent three years in Wisconsin, which was entirely different from the life she had come to know on Chuuk.

Joanna recalled her difficult adjustment there because she didn't speak English very well. The kids in high school thought she was from Hawaii, and she thought snow falling from the sky could be lethal.

The one thing that was familiar to her life on Chuuk was the warmth and hospitality of the Beasley family.

"The love of the family was the best of the new things I found," she said. From them she improved her English, learned correct place settings for the silverware and how to water ski.

Joanna tried to experience as many things as she can in her new "home," and was quite active in high school.

She played softball with a real ball, whereas "in Chuuk, we played with the inside of a coconut," she said. "I took tennis, bowling, volleyball and they were all new games. I really had fun."

After three years, Joanna returned to Chuuk and started working in a store with her sister. She eventually married a man from Chuuk who convinced her to move to Guam.

Then, 20 years after experiencing a different side of the world, the past came back to pay her a visit.
The return

The Beasleys in March took a trip to Hawaii and Micronesia to visit the people they have come to know as "family."

"I had always thought it would be fun to go back and see people ... and see what they have done with their lives," Pen said.

John said he was slightly nervous about traveling across the world again, but all his fears were laid to rest when he finally arrived to the places he worked at more than 30 years ago.

"It was like going home again," he said, "and it was to a much greater extent than I ever thought possible."

"If it hadn't been for the family connections, it would've been a meaningless trip back," John said of the journey.

For Joanna, when she saw the Beasleys on Guam earlier this year, she said she cried many tears of happiness.

"It was like they never left," she said emotionally. Her devotion to the couple was evident when she spoke of her wish to take care of the couple in their golden years.

This story has been posted in the following forums: : Headlines; COS - Micronesia; Return to our Country of Service - Micronesia