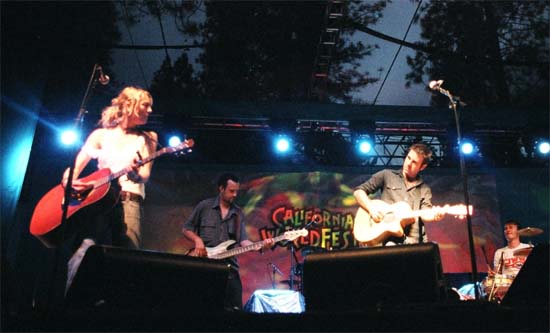 "You have people from different places and lifestyles coming together, and they're united by music," he says. "There's a great opportunity for people to be their best. It's something special that happens for four or five days that feeds you for the rest of the year."

Dan DeWayne has been putting on music festivals for 23 years, and in the process, he has learned a thing or two.

"To tell you the truth, only wackos put on festivals," he says. "It's so much work, it is a year-round operation. It's much more difficult than doing a concert where it starts at 8 and goes until 11. When the music's over, that's just the beginning of the work. You're building a little city; everything that happens in a city happens in a festival."

But things happen at a festival that are much less likely in a city, says DeWayne. So, after a few years off from producing the Strawberry Music Festival, which he co-founded in 1982, he started California WorldFest, which opens its ninth year Thursday night at the Nevada County Fairgrounds in Grass Valley.

"You have people from different places and lifestyles coming together, and they're united by music," he says. "There's a great opportunity for people to be their best. It's something special that happens for four or five days that feeds you for the rest of the year."

With its international focus, WorldFest doesn't just draw together diverse listeners. It also brings artists from as far away as South Africa (Ladysmith Black Mambazo), Australia (The Waifs) and Italy (Fiamma Fumana).

But there is also a strong emphasis on local musicians, and Sacramento area artists Bucho!, Jackie Greene, Chris Webster and Joe Craven will appear, along with such Northern California-based artists as Linda Tillery and Nina Gerber, Alasdair Fraser and Voco.

DeWayne likens the effect of hearing all these different artists to that which one gets when traveling.

"That's always attracted me, that idea of, 'How do you look at things from the other side?' " he says. "What's the view from the mountain? Where does this rhythm take you? If you listen to rock music most of the time, 15/8 rhythm structures do something different to you."

DeWayne doesn't just use travel as a metaphor. He spent part of his early adult years as a volunteer for the Peace Corps, in the African nation of Mali.

"This guy asked me, 'Do you know the difference between you as an American and me as a Malian?' " DeWayne remembers. "He said, 'You need a fork, and I' - and here he held up his open hand and smiled - 'I'm ready.' "

DeWayne laughs at the memory. "And he was right, and it told me something about our different perspectives on very simple things."

The diversity of WorldFest's lineup - one of the artists DeWayne enthuses about is Jake Shimabukuro, a ukulele player from Hawaii, and the ensemble Mortal Coil features dancers on stilts - means that listeners don't tire so quickly.

"It's wonderful to have festivals that are genre-specific," he says. "But my take is that if you've listened to the same reggae thing, or bluegrass, over a long period of time, your ear gets fatigued. But if you hear John Jorgenson doing Gypsy jazz guitar, followed by a vocal group like Ladysmith, it touches a whole different part of your self."

DeWayne is also happy that many of the artists have the same experience.

"I remember one year, Ricky Scaggs was playing Bill Monroe stuff, and Strunz and Farah preceded them, playing flamenco fusion jazz music," he recalls. "And Ricky's whole band was around the sidestage, watching them with their mouths hanging open. It was fresh for them, too, and perhaps they picked up something that later entered what they do."

The notion that one can learn at a concert is not so common at mainstream shows, but at festivals such as WorldFest, it is a crucial element. All through each day of the festival, artists will lead workshops in everything from group singing and songwriting to Latin dance, yoga and playing the ukulele. There are many workshops for kids as well.

But that makes sense, for that is part of what one does in a city: meet new people, learn new things. And that, says DeWayne, is why he still does festivals after 23 years.

"People come to a festival with a bigger commitment," he says. "It's not just three or four hours, you've already had dinner, it'll be over before 11. That's like going to a movie.

"A festival is a multiple-day environment; you're commited to camping, or at least staying in a hotel that's not your home, and that's intimidating to some people.

"But you create relationships with people at a festival," he says. "You don't just talk to the people seated next to you; you talk to people you run into repeatedly. You become a part of a community."

California WorldFest
WHERE: Nevada County Fairgrounds, Grass Valley
WHEN: Thursday-next Sunday
TICKETS: Four-day passes (with camping) are $110 until Wednesday, $125 at the gate. One- to three-day passes also are available. Single-day, no-camping passes are $30 in advance and $35 at the gate after Wednesday. Discount tickets for 16-and-under.
INFORMATION: (530) 891-4098 or www.californiafestival.com

This story has been posted in the following forums: : Headlines; COS - Mali; Music