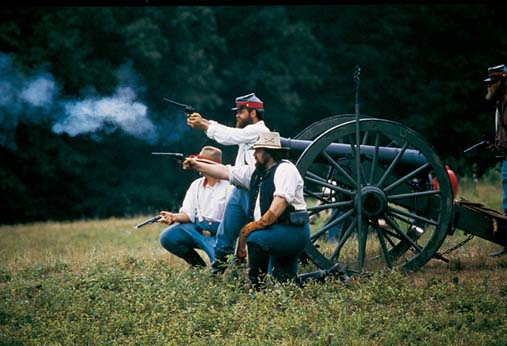 We already have thousands of civil war re-enactors, armies of paint ball warriors, too, and walking through any theater lobbyor Wal-Mart, I find squadrons of troops spilling gallons of digital blood in the arcade. We could put them all to work as ritual warriors.

I love my mother. Love to be in her house, love to give her a hug, love to be around her — hear her singing softly as she putters about her kitchen, making apple pie. Love that apple pie too.

Don’t get me wrong, though. I am not a sissy. As a boy, I carefully walked the narrow line between showing outright affection for Mom, you know, being feminine, and being tough. I learned not to shed tears when scratched. Not to cry. It is a trait I cultivate today. I am one tough American male. Not a girly-man.

I played war as a kid. Across the pasture that stretched behind our house, I carried a wooden stick which I imagined was a carbine and I decimated countless populations of imaginary Sioux.
- advertisement -

My friend Ozzie and I killed hundreds, hundreds of Krauts and Japs in a lot filled with old, rusting farm equipment that served for us as tanks, submarines and aircraft carriers.

“Rat-tat-tat-tat tat! Bu-dh-dh-dh-dh ! Eeeeeeeeeeeeeeeeeeee-bzrluooonsghhchchszch!” our boyhood voices screamed at dive-bombers, pillboxes and waves of troops trying to destroy our way of life. There was prestige earned by whoever could make the most realistic machine gun sound or whistle or whine of incoming mortar round.

So it was not so unreasonable that when I graduated from college, and didn’t know what to do with my life that I would enlist in the regular Army. Had I not prepared myself? Ozzie and I had, after all, lobbed air grenades into the tall grass of a vacant lot near my home, thrown ourselves down on the ground to avoid the blast, played at war.

Any moment of anyone’s life can be called fortuitous. At any hour in your life, you stand at a cross roads; the past stretches out behind you and an unknown future rolls out before you. My life was abruptly redirected when I broke my neck in a car accident. The Army told me my enlistment would have to wait a year. Then I could be re-examined.

Laid up in a cast from ears to hips, an invitation from the Peace Corps came in the form of a Western Union telegram, inviting me to train at Syracuse University for a possible teaching assignment in Malawi. My fractured odontoid was no problem, they said, I could report in the fall.

Sadly, some other mother’s son was probably yanked out of the line to join the Peace Corps and put in my place to go to the Army. In 1966, the Army was badly in need of 18- to 24 year-old recruits. Boys entered that Chaplinesque, Modern Times-war-machine at one end and came out soldiers at the other. Then they were sent into the maw that was Southeast Asia. Vietnam.

I went from almost-soldier-for-LBJ to peaceful-missionary-for-LBJ in one tumultuous year.

Living in Africa, I came about peaceful leanings honestly. I learned them and I learned an entire new appreciation of what being American means.

I love my country.

We Americans are blessed. We are the greatest country in the world. Can there even be any question about that? So why do we destroy another country? Why focus the destructive power of our 200-year advances in science, art, medicine, industry, economics, space travel, organization and warfare....why focus this ominous might on lesser nations? The Peace Corps taught me that construction is preferable to destruction.

Some would have us believe there are times when war is the only option. I say that we who have walked on the moon, we who have probed disease at the cellular level, we with our amazingly high standard of living, we are creative enough to solve international problems by means other than war.

If war we must then I suggest ritual war. Much like the Pasola people of Sumba Island in Indonesia. These primitive peoples, in their uncivilized way wage war without destroying property, and they don’t harm innocents.

In some long forgotten anthropology class, I recall other cultures, too, that engage in ritual warfare. Disputes are settled by fierce posturing. People line up opposite each other and shake weapons at each other. They curse, threaten and jab at one another with sticks. And when an injury occurs, war is over.

Face, very important, is saved and no noncombatants are hurt.

We might consider these uncivilized ways. It wouldn’t hurt us. The ritual war could be confined to an uninhabited, undeveloped region — parts of the Sahara come to mind or regions in Greenland. If we can regulate war with rules as we do now with the Geneva Convention, we could go a step further and confine it to certain places.

Limit it also to specific weaponry. We could turn the chaos of war into an orderly activity, almost a sport if you will.

We already have thousands of civil war re-enactors, armies of paint ball warriors, too, and walking through any theater lobbyor Wal-Mart, I find squadrons of troops spilling gallons of digital blood in the arcade. We could put them all to work as ritual warriors.

In fact the whole war thing could be fought in computers. Simulated war games on computers would preserve sensitive ecologies. War games could involve only those so inclined and spare the rest of us.

Violent, warlike video games are filled with shooting and ripping off peoples’ heads and limbs. All that should be enough to approximate the utter senselessness and waste of war.

I often pray for knowledge of God’s will. I don’t know what His will is in this. He is the Creator though and I suspect the Creator would prefer us be creative, rather than destructive.

Maybe He would rather we just played war like Ozzie and I did.

David Vick’s column “Journeyman” explores questions of religion and faith that affect everyone. Readers may send comments to him at the Saturday Gazette-Mail, 1001 Virginia St. E., Charleston, WV 25301, or at dvick@wvgazette.com. He can be reached at 348-5120.

This story has been posted in the following forums: : Headlines; COS - Malawi; Speaking Out

message for Dave Vick from Alain who was a teacher in NKATA BAY SECONDARY SCHOOL at the same time as Dave.
Hello Dave, how are you? what have you done? what are you doing to-day? have you heard of Walt?
For my part, I am no longer working, being pensioned.It's a bit boring though I play tennis and bridge.(It's difficult to be all day long with one's wife!!!).
I hope you receive this message. Alain

Dave:
I was messing around with Goggle and for some reason stumbled across your name and the article you wrote for Peace Corps Online a few years ago.
Well hello to you. I guess that we both fell off the edge of earth as far as keeping up with each other's whereabouts. Brief catch up history. The last contact we had with you was in D.C. where you were an aspiring photographer. We (Kathleen and I) moved to Roanoke, Va to save Appalachia from poverty (didn't work). In "75 we moved to New York where i got a real paying job and Kathleen went to Columbia where she eventually earned a PhD. We Moved to Indianapolis in 1981 and have lived here ever since. We have for "children"; Gretchen is 27 and going to NYU (acting), Kitty is living in Marseilles and attending graduate school in public health, Allan Jr. just graduated from Indiana University and may go on to Medical school after taking a stab at becoming a famous rock star. George will be a Senior at I.U. majoring in Music business.
What is up with you and Charleston West Virginia?
AL HALL

Al?
Kitty?
Just stumbled on this. Hope it's not 8 years too late.
David