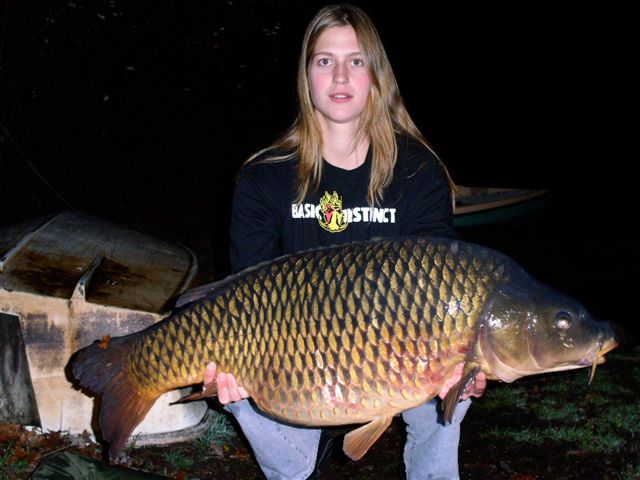 Essentially an overgrown goldfish, carp were introduced to North America from the Old World by immigrants who thought they were doing a kindness. But the hardy, omnivorous carp quickly invaded the habitat of native freshwater game fish, and came to be maligned as "bottom feeders" whose flesh was shunned by most Americans as "muddy-tasting."

Meanwhile: Getting a taste for carpe à la provençale

CAIRANNE, France No, this story is not about food. Camaret sur Aigues, Sérignan du Comtât, and Sainte-Cécile-les-Vignes are three quiet towns in Provence, where I now live for part of each year. Each town has a fishing club, with its own stocked pond (étang, or plan d'eau). Some of these Provençal anglers specialize in fishing for carp.

Essentially an overgrown goldfish, carp were introduced to North America from the Old World by immigrants who thought they were doing a kindness. But the hardy, omnivorous carp quickly invaded the habitat of native freshwater game fish, and came to be maligned as "bottom feeders" whose flesh was shunned by most Americans as "muddy-tasting."

However, the carp's reputation in the United States as a sport fish has grown in recent years. Carp routinely grow to 44 pounds (20 kilos), and they are now recognized by American fly-fishermen as a worthy quarry, strong fighters; as picky and hard to fool as any fish that swims.

So when my French neighbors in Provence told me about an upcoming three-day marathon carp-fishing contest, I had to see it for myself.

Any Provençal carp fisherman worth his pastis has a secret formula for bait. They are as tight-lipped about these aromatic concoctions as a three-star chef is about a signature dish.

The bait begins as a paste, which is molded into a ball and boiled to maintain its shape. Carp fishers use telescoping fiberglass rods of 11 to 12 feet (3.5 meters) and spinning reels spooled with stout line. The baited hook is cast into the depths on a weighted line that may be suspended under a bobber.

The angler waits patiently on the bank for something to happen. Once landed, the carp are weighed, then released to fight again. As far as I know, fly-fishing for carp, which entails attracting a strike by sight rather than scent, has yet to catch on in Provence.

The three-day marathon pitted teams of carp anglers at the three ponds. I visited Sainte Cécile's étang de Bel Air each day. On Friday night, I arrived to find some of the anglers comfortably ensconced in tents pitched around the shady banks of the pond, lines in the water, their rods ready to grab in the event of a bite.

Another group of anglers was enjoying a picnic, while little boys watched their lines for a bite.

A strapping young fisherman named Sebastian was methodically flinging bait pellets into the water around his lines, hoping to chum up some action. His bait did smell appetizing, but I can't divulge its secret.

I left at 9:00 p.m. when the sky was still light, assured that nothing would happen for hours. Apparently, big carp in the étang feed only at night.

I returned the following day around 6:00 p.m. Walking around the edge of the pond, I saw a large pod of carp swimming around nonchalantly in the middle, clearly visible in the bright midsummer evening.

A member of the team reported that one fisherman had caught two carp the previous night, weighing over 26 pounds (12 kilos) each. From all three ponds, those were the only fish taken in the first two days of the marathon.

The team earns 1,000 points per kilogram for each fish. The anglers of the étang de Bel Air held a commanding lead, which they padded the final night by adding two more carp to reach a total catch of 88 pounds (40 kilograms).

The same fisherman, a facteur (postal worker) in Vaison-la-Romaine, caught all four fish. Evidently he had the best spot on the étang, the je ne sais quoi that makes one fisherman better than his peers, and, of course, the most alluring bait recipe.

No prize was awarded, but according to my neighbor, Richard, "the winner had the satisfaction of knowing he was the best."

The carp marathon has opened my eyes to a new sport fishery I overlooked during a decade of long summer vacations in Provence.

Perhaps I can visit the étang de Bel Air with my fly rod when the light is low. Bien sûr, I will start by conferring with the facteur from Vaison to figure out what kind of flies might appeal to carpe à la provençale.


About the author: Thomas O. Mann

I have written about fly-fishing and related topics in various publications for the past 15 years, including the Wall Street Journal, and other small, limited circulation journals of local conservation organizations in Michigan and Washington, DC.

I have been editor of Riffles, the newsletter of the National Capital Chapter of Trout Unlimited for several years.

I was a Peace Corps volunteer in the 1960s, and served as a US government lawyer for 30 years before retiring in December 2004.

This story has been posted in the following forums: : Headlines; COS - Chad; Carp; Fishing

howe big is that carp