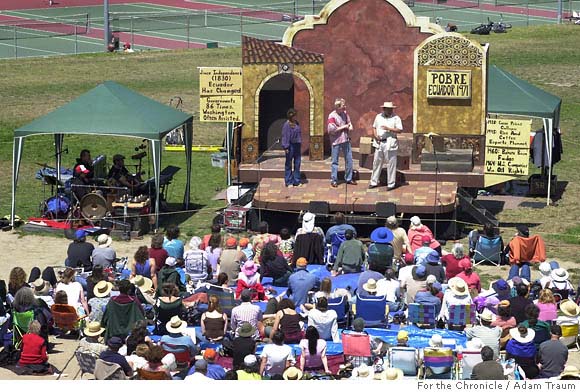 Inspired by Peace Corps Volunteer John Perkins' best-selling "Confessions of an Economic Hit Man" -- an autobiographical expose of foreign aid scams and free-market imperialism -- "Good" is based on a scenario by former longtime Mime Troupe playwright Joan Holden and director Dan Chumley. It was written as an epic tale -- stretching from 1968 to 2006.

Mime Troupe tackles history, politics and the World Bank one signboard at a time

Caption: "Doing Good" which opened Saturday and plays through today in Dolores Park, is the most ambitious and riskiest new piece the company has put up in many years. Chronicle photo by Adam Traum

There's plenty of essential history in "Doing Good" and an awful lot of signs. In some respects, there's more history in the signs than in the story performed between them, and more drama in the history than in the story created to illustrate and comment upon it. The best parts of "Good" -- the songs, the information, an engaging bit of Indonesian masked street theater -- haven't been integrated into a cohesive whole.

Which isn't to say that the show isn't worth seeing, especially as a traditional Bay Area patriotic way to celebrate the Fourth. "Good," which opened Saturday and plays through today in Dolores Park -- the Mime Troupe's usual Fourth of July weekend kickoff to a full summer of free shows in the parks -- is the most ambitious and riskiest new piece the company has put up in many years.

It's laced with sharply pointed humor. It's fiercely politically engaged. It features three remarkable new songs by music director Bruce Barthol, who wrote the music (with keyboardist Pat Moran and reeds player Jason Ditzian) and lyrics (with Amos Glick). It's a radical departure from the group's usual farcical approach to examining current political issues. Most of all, it's a serious attempt to explore the workings of American and World Bank foreign aid as a means of enmeshing developing countries in debt for the benefit of American corporations.

Inspired by John Perkins' best-selling "Confessions of an Economic Hit Man" -- an autobiographical expose of foreign aid scams and free-market imperialism -- "Good" is based on a scenario by former longtime Mime Troupe playwright Joan Holden and director Dan Chumley. It was written as an epic tale -- stretching from 1968 to 2006 -- by Shimosato, Erin Blackwell, Jeffrey Morris and Ellen Callas, with added dialogue by Holden and Barthol, and directed in semi-Brechtian style by Victor Toman.

The Brechtian approach is fitting. "Good" is essentially a lehrstück, or lesson-play, the form Brecht developed to explore knotty political problems onstage. The frankly didactic historical information -- on signboards on both sides of the stage and signs carried by the actors (much of it helpfully reprinted in the program) -- frames a parable meant to illustrate the gist of the argument.

It starts in New England in '68 (during the Tet offensive in Vietnam), where newly graduated James (Noah James Butler), a charmingly articulate young man, is up against the draft. On the advice of his girlfriend's uncle Ray (Michael Gene Sullivan), a mysterious government agent, he and the idealistic Molly (Lisa Hori-Garcia) join the Peace Corps -- to wage economic empowerment instead of war.

James is so persuasive setting up an agricultural program in rural Ecuador that Uncle Ray, now working for a major international development corporation, shows up to offer him a new job -- which also gets James and Molly out of the way for the corporation's oil projects in the region. The rest of the play follows James from Quito to Jakarta to Panama City, where -- while Molly works on women's health and reproductive issues in each country - - he sells huge infrastructure projects financed by enormous loan packages.

A clever setup uses Molly's market haggling with a Jakarta batik merchant (Shimosato) to mirror James' learning the art of dickering over bribes with the corrupt ministers in each country (all played by a magisterial Brian Rivera). Molly finally wises up and goes home to get involved in progressive causes. James moves on to Tehran, just before the fall of the Shah, and, eventually, Kabul.

In each country, somebody tries to explain to the couple the true costs of James' free-market evangelism. The most inventive effort is the striking good-vs.-evil Indonesian masked-dance, with Sullivan as an all-consuming Uncle Sam demon. The angriest and clearest case is presented by a mullah (a fervent Christian Cagigal) in Tehran. True believer James keeps pushing the capitalist shell game: "Just because you're religious fanatics doesn't mean you have to live in the Dark Ages."

Toman and the writers haven't figured out how to make the story dramatically coherent, however. Too many characters come and go, and too many extraneous ones are talked about. Scenes peter out, dissipating the theatrical momentum. The signs overwhelm rather than enhance the action. The striking costumes (Callie Floor and Cassandra Carpenter) provide greater character definition than some of the performances.

At this point in its development -- and the Mime Troupe usually revises and refines during the course of a run -- the politics are more interesting and persuasive than the play. That may be the point, but it doesn't make "Good" as enticing as it wants to be to get its necessary message across. Where it succeeds best is in its three songs, vigorously performed by Shimosato, Cagigal and Sullivan. The effort to tackle such a vital and immediate international issue is inspiring, but the inspiration hasn't gone far enough.
Dates for 'Doing Good'

The San Francisco Mime Troupe performs "Doing Good" in the following venues. Music begins one half-hour before show times. All shows are free except those with a box office number for tickets.

This story has been posted in the following forums: : Headlines; COS - Ecuador; Theatre; Musicals