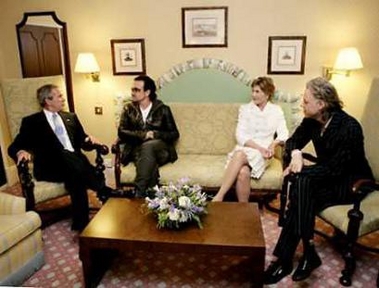 Having lived in a developing country for two years, I can appreciate how foreign aid to impoverished countries is fraught with complications and risk. The call by the Africa Commission report for wealthy countries to increase their international aid to 0.7% will be met with resistance, not only by the Bush Administration but by many Americans as well. "It doesn’t work," people love to argue. "Aid money is always squandered. Governments aren’t being held accountable; there’s too much corruption."

Aid for Africa – Will the G8 Help?

On June 11th, when I heard the news that the finance ministers of the world’s richest countries agreed to cancel $40 billion of debt for eighteen of the world’s poorest countries, I was so happy, I cried. I’m a returned Peace Corps Volunteer, one of those bleeding-heart types who grieves regularly for the 50,000 people around the world who die each day of poverty-related causes. But while the decision is historic, the problem, I recognize, is far from solved.

The agreement was part of a proposal driven by British Prime Minister Tony Blair, who, along with the U.K., will be hosting this week's G8 summit in Gleneagles, Scotland. The issue of how to halve global poverty by 2015, based on the recently released Africa Commission report, will be one of the focus topics. In addition to debt cancellation, the report calls for the world’s richest nations to increase their aid to 0.7% of national income by 2015.

The United States, as the Bush administration likes to remind us, is the world’s leader in humanitarian assistance and food aid. When judged by gross national income, however, the U.S. ranks twentieth among the world’s nations, at 0.18%. Currently, there are no plans within our administration to increase that aid to the suggested 0.7%.

Having lived in a developing country for two years, I can appreciate how foreign aid to impoverished countries is fraught with complications and risk. The call by the Africa Commission report for wealthy countries to increase their international aid to 0.7% will be met with resistance, not only by the Bush Administration but by many Americans as well. "It doesn’t work," people love to argue. "Aid money is always squandered. Governments aren’t being held accountable; there’s too much corruption."

Here are some surprising facts on accountability. 70% of the 0.18% the U.S. gives, in accordance with our laws governing development assistance, has to be spent on U.S. contractors and goods, reducing the value of the assistance by as much as 25%. AidAction, an international organization based in South Africa, issued a scathing report claiming up to 90% of aid funds are "lost to waste, internal recycling within donor countries, misdirected spending and high fees for consultants." The U.S., they state, is one of the worst offenders.

But the U.S. is not the sole villain in the effort to reduce global poverty. A British bank holds $1.3 billion in savings looted from Nigeria by the Abacha family, even as the British government chastises Nigeria for its corruption. 10 of the 14 African countries with armed conflict in 2003 bought arms from the UK. France, Germany and Italy benefit greatly from the E.U.’s common agricultural policy, to the detriment of African farmers who can’t compete with pricing. If the world’s richest countries wanted to better help developing economies, we could stop flooding their markets with subsidized agricultural products, sold cheaper than they can produce them. Fair, not free trade, would go a long way here.

"If Africa increased its share of world exports by even one percent," South African Anglican Archbishop Njongonkulu Ndungane, argued recently at a conference in Washington, "this would generate $70 billion. This is approximately five times what the continent receives in aid."

Debt cancellation is a historic step in the right direction to combat global poverty. But this alone won’t solve the problem. Trade, corruption, accountability and aid will all be addressed at this week’s G8 summit. My hope is that poverty, and Africa, in particular, will continue to be an issue at the forefront of world events. I love Africa-its wild vivid beauty, passion, and the indomitable spirit of the people-with a pain it is hard to share with those who haven’t experienced it firsthand. Africa, I believe, can rise from this cycle of poverty and despair, but only with our support.

Paul Wolfowitz, newly appointed head of the World Bank, spoke recently of this during his first African tour. "This may be a moment of hope," he told listeners in Burkina Faso, "when countries in Africa are beginning to turn the corner and when the developed countries are showing a greater interest in helping Africa."

This is my fervent hope. It would do my cynical Peace Corps heart good to see that it’s still possible to make a positive change in the world.


About the author
Terez Rose’s essays have appeared in the San Jose Mercury-News, the Milwaukee Journal-Sentinel and the Spokane Spokesman-Review. Anthology credits include Women Who Eat: A New Generation on the Glory of Food (Seal Press, November 2003), A Woman’s Europe (Travelers’ Tales, June 2004) Migrants and Stowaways (Knoxville Writers’ Guild, October 2004) and Italy: A Love Story (Seal Press, June 2005). She has recently finished her first novel, set in Central Africa.

This story has been posted in the following forums: : Headlines; COS - Gabon; Writing - Gabon; Speaking Out; Foreign Aid; G8 Summit