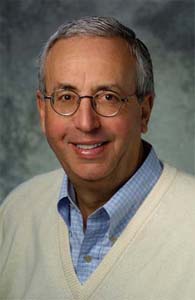 Haas joined Levi's two years after the company went public. He graduated from UC Berkeley in 1964 and received his MBA from the Harvard Graduate School of Business four years later. He served in the Peace Corps in the Ivory Coast from 1964 to 1966 and was a White House fellow for a year. He went on to become an associate with the management consulting firm of McKinsey & Co. from 1969 to 1972.

Haas to keep hand on Levi's
Last of family to run jeansmaker to stay active in S.F. firm

Some might dispute his management style. Others will criticize him for his business decisions.

But one thing everyone seems to agree on when it comes to Robert Haas, former CEO and current board chairman of Levi Strauss & Co., is that he is simply a nice guy.

"On a personal level, I think he's one of the finest human beings I know, " said Harry Bernard, a partner with the independent San Francisco fashion- marketing and consulting firm Colton Bernard Inc. "He's decent and honorable."

Such attributes have earned Haas tremendous respect through the years. How far those same attributes have gotten him in the business world, however, remains in question.

For Bernard, there is little doubt. "His greatest strengths were part of his greatest vulnerabilities," he said.

On July 12, Haas announced his retirement as a salaried employee of the San Francisco jeansmaker, effective Aug. 1. He will remain in his role as the nonexecutive chairman of the board of directors and as one of the principal shareholders of Levi's.

"This change in my job status simply means that I will begin to receive my retirement benefits rather than be paid as a full-time salaried employee of the company," Haas, 63, said in a statement.

"Let me underscore that my role and active involvement at the company are not changing," he said. "I'll continue to be in the office every day, working with our board of directors, community affairs department and the Levi Strauss Foundation; attending company meetings; traveling; and representing the company with shareholders, customers and other external constituencies."

The subtle move essentially alters nothing for Haas, the great-great- grandnephew of Bavarian immigrant Levi Strauss and the last of his generation to be employed by the company, where he has worked since 1973. But it does point to an eventual future without him standing at the helm.

"Right now, it's more that it symbolizes changes to come," said CIBC World Markets analyst Alexis Gold. "He's almost indicating that he is human and he is going to move on."

Haas, who was unavailable for an interview, has long led Levi's using the family legacy as his compass. Today as the board chairman, he still emphasizes the tradition of corporate responsibility, instilling strong social values in his workforce. Under his leadership, Levi's claims to be the first major U.S. clothingmaker to have adopted an extensive factory-monitoring program. It also maintains that its manufacturing code of conduct overseas is among the most stringent in the industry.

As chief executive officer, Haas was responsible for overseeing the creation of the popular Dockers brand. He was also instrumental in re- establishing Levi's as an American icon. Its brand name became synonymous with blue jeans.

But also under Haas' leadership, Levi's sales took a major dive in the 1990s. Suddenly, a company that could do no wrong was no longer doing it right. Retail analysts criticized the company for coasting along on its past instead of paying attention to its present. Fashion trends were passing it by. Haas was also reluctant to ship manufacturing jobs overseas when most of his competitors had not given it a second thought.

"He didn't want to hurt the people, so he didn't close the plants, but he should have," Bernard said. "It was the people before the business. It was a terrible dichotomy to live with."

Levi's sales went from a peak of $7.1 billion in 1996 to $4.07 billion last year. But the company is gradually turning itself around. In its second quarter, which ended May 29, it more than quadrupled its profit to $26.8 million from $5.6 million in the same period a year ago. It was unable to reverse slumping sales, however, which are in their eighth consecutive year of decline.

Haas joined Levi's two years after the company went public. He graduated from UC Berkeley in 1964 and received his MBA from the Harvard Graduate School of Business four years later. He served in the Peace Corps in the Ivory Coast from 1964 to 1966 and was a White House fellow for a year. He went on to become an associate with the management consulting firm of McKinsey & Co. from 1969 to 1972.

At Levi's, Haas served in a variety of marketing, planning and operating positions before being named CEO in 1984. That year, he faced the monumental task of refocusing the company on its core product amid falling sales. In an October 1990 issue of Harvard Business Review, Haas described the candid conversations he had with his employees, in which he talked about "the stark terror I felt when I took over this company, just having turned 43 years old.

"We were a company in crisis. Our sales were dropping, our international business was heading for a loss, our domestic business had an eroding profit base, our diversification wasn't working, and we had too much production capacity. I had no bold plan of action."

Nonetheless, Haas managed to pull off a comeback. In 1985, he led a triumphant effort to take the company private again through a $1.6 billion leveraged buyout, then the largest buyout of a publicly held U.S. firm. And Levi's reclaimed its reputation as a venerable jeansmaker.

In 1999, with sales tumbling once more, Haas decided to step aside and for only the second time in Levi's history, a nonfamily member became CEO. Phil Marineau was brought on board, leaving his high-profile job as head of Pepsi's North America operations.

Warren Hellman, chairman and co-founder of Hellman & Friedman, the investment firm responsible for taking Levi's private, credited Haas for the years that Levi's flourished under his control. He also praised him for knowing when to let go of the reins.

"The company did extremely well with Bob as CEO," said Hellman, who is one of four controlling trustees of Levi's. "He left knowing that there were other attributes that were going to be necessary for the CEO of the future."

Hellman described Levi's as a manufacturing company "with a wonderful brand that did a reasonable job of marketing it."

"Then the market became extremely competitive," he said. "They were no longer the only people making jeans. It became a marketing business. The future CEO needed a strong marketing background."

Hellman said that Haas and Marineau have many of the same attributes, but to varying degrees. "They're the same in that both are very organized and detail oriented," he said. "If you have a meeting, Bob takes copious notes and actually looks at them. They both have a very good work ethic."

But, Hellman added, "Phil, coming from a much larger company background, has a little more perspective on how companies need to be run. He has more organizational experience."

Hellman said that because Marineau stepped onto the scene with fresh eyes, he was able evaluate the historic practices of Levi's. "Levi's was slow to close factories and go abroad, and Phil said, 'Let's look at all the factories, ' " Hellman said. "Bob did close factories, but Phil was more decisive in that area."

A change in times

As for the company that Haas had worked so hard to build as CEO, Hellman said that times have made it more difficult for Levi's to be sustained that way.

"The company in the really affluent days could afford to be far more benevolent than when for a few years, the wheels sort of came off," Hellman said. "The company had always been extremely profitable, with a high cash flow, and you tend to do things differently than when you're going through tough times."

Hellman said that Haas realizes the company he took over as CEO is not the same today. "Bob is, under everything else, a realist," he said. "He has accepted gracefully that this is a different world."

"When you think Bob Haas, you think Levi's," said Gold, the CIBC World Markets analyst. "For me, those things go hand in hand."

Haas managed Levi's much differently than his father, according to Hellman. "Bob wasn't as lucky as his father," he said. "His father and Peter Sr. lived in an era where you couldn't do anything wrong. When you had an inventory problem, it was because you had too little inventory, not too much. It's always easier to run a company during growth."

"Bob is different from his father -- more thoughtful, more detail- oriented, leads in a far different way than his father," Hellman added. "His father was way less private than Bob. Bob is a very, very private person. Walter was sort of everywhere."

The Haas name is everywhere as well. As devoted alumni of UC Berkeley, family members have given generously to their alma mater. In return, their name is spread about the campus, including the Haas Pavilion, and the Haas School of Business.

"From the campus perspective, it's hard to find any other family deeply connected to the university in many, many years," said Richard Lyons, acting dean of the Haas School of Business.

In 1980, Walter Haas Jr. purchased the Oakland Athletics baseball team from an owner who threatened to take it to Denver. The Haas family has also contributed countless dollars to various charitable organizations. Robert Haas in particular took up the fight against AIDS after a family friend died of the disease in the 1980s.

"He understood that he was uniquely placed to speak to this issue with authority and experience," said Mark Cloutier, executive director of the San Francisco AIDS Foundation, who used to worked for the Levi Strauss Foundation and helped redesign its AIDS grant-making efforts domestically and internationally.

At a time when little was known about AIDS -- a time when people worried about catching the disease from a sneeze, by touching a keyboard or by shaking hands -- Haas addressed the issue head-on by accommodating workers coming back from a disability and offering health benefits and insurance coverage to people suffering from the illness. To raise awareness, Haas stood in the lobby of Levi's and distributed information about how HIV is transmitted along with information about prevention.

"Bob doesn't just get interested in things at the periphery," Cloutier said. "When Bob chooses an issue to be interested in, he goes right to the core."

Bernard, of the fashion-marketing and consulting firm Colton Bernard, said that Haas has left an indelible mark on Levi's as well as the community around him.

"I think it's a better place because he is so highly respected," Bernard said. "People care, and one of the reasons they care is because of Bob Haas. He's a paragon in the community."

Although Bernard remains critical of the way Haas ran his company, he has no harsh words for the man himself.

"I don't think it was Bob -- it was Bob's style of doing things," Bernard said. "It's difficult to deal with something like this when you're dealing with someone who thought he was doing all the right things for the right reasons."

This story has been posted in the following forums: : Headlines; COS - Ivory Coast; Business