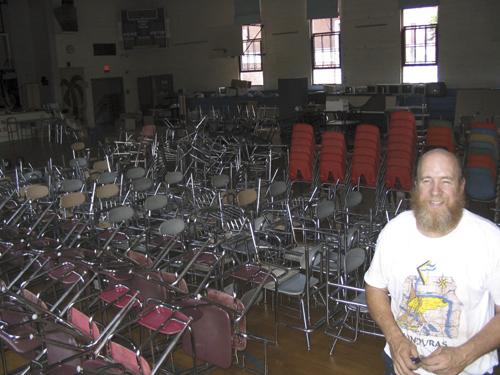 Man on a mission

GREAT BARRINGTON -- Edward O'Toole picked up an old wooden folding chair that has been stacked against the wall at Searles Middle School.

He took another chair.

"Very nice," he said, brushing some of the dust off it.

O'Toole is a man on a mission. The former Peace Corps volunteer, now a resident of Honduras, is in Great Barrington to salvage every unused piece of furniture at the former Searles Middle School for schoolchildren in that economically depressed country.

"Honduras is one of the poorest countries in the Western Hemisphere," he said, as he dismantled a desk. "You've got Haiti and Nicaragua, and Honduras is right up there."

O'Toole said he was a member of the Peace Corps for
many years, and his travels around the world have moved him to continue to try to help those in need.

"There is a love for peace and a realization that education is the key to everything," he said. "It's empowering."

Presently, O'Toole is dismantling the 300 desks, 250 folding chairs, seven large cabinets, 10 filing cabinets, a dozen computer tables and several teachers' tables. They will all be placed in a huge shipping container that will be trucked from the Berkshires to a dock in Delaware, and from there shipped to Honduras.

In addition, he said, the Berkshire Hills Regional School District has donated 20 old computers that will also be boxed and shipped. A friend of O'Toole's, Sister Marta Soto, will distribute all of the items.

Sister Marta, a Catholic nun in Honduras, is part of an organization that runs a school in the country. The school works with a Honduran radio station to broadcast a distance learning educational program. The program, based in the country's capitol, Tegucigalpa, reaches about 30,000 children located in rural areas of Honduras.

O'Toole explained that throughout the week, the rural children are educated through the radio show. On the weekends, the children come to centralized education centers for more personalized help. This is where the desks and chairs come in. The school is in desperate need of desks, tables, chairs and other supplies.

O'Toole is originally from Long Island, and his wife, Kelley, is from Cummington. The family, which also includes the couple's 12-year-old daughter, was spending some time in Pittsfield when O'Toole found out about the old furniture.

"I actually read a letter to the editor in your paper about the old furniture," said O'Toole, "and I thought, 'Man, don't throw that stuff away!'"

O'Toole contacted the district administration, and "they told me, you can have whatever you want after we hold the tag sale."

The tag sale, held at both Searles and the Stockbridge Plain School, was held this past weekend. O'Toole has been at the school since Monday, salvaging whatever he could find.

And he's not done, either working or appealing to residents.

"You know, there's a lot of space under those desks," he said. "So we could still put stuff in them."

So, said O'Toole, if any resident has old shoes or other clothing, or school supplies like pencils or crayons, they can come to Balgen Machine, just over the line in West Stockbridge, tomorrow morning and drop the items off. Crutches and old wheelchairs are also needed, he said.

The only request O'Toole has is that the smaller items be bagged, and a list of the items be placed on the bag. Because the container is going overseas, he said, there must be a strict accounting of the items.

Balgen is the drop-off point because the business has a loading dock, so the giant container can be loaded into a truck for shipment.

Also, if people would like to help load the items into the container, they can call O'Toole at (413) 329-0512, and he will direct them. If people have questions, they can also call that number, he said.

"This should be the norm," he said. "When a school is dismantled, the old furniture should be shipped to someone who can use it, in Honduras, or Iran, or other needy places around the world."

This story has been posted in the following forums: : Headlines; COS - Honduras; Service