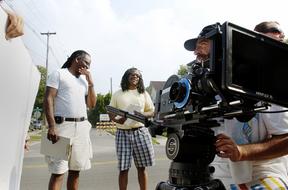 Wray is originally from northern Ohio, and he traveled to East Africa for two years with the Peace Corps before moving to East Lansing in 1998 to teach film at MSU. "When I was traveling, I got to see a lot of works around the world and that was inspiring," he said.

Caption: On Aug. 3, director and English Assistant Professor Jeff Wray, middle right, and assistant director K.I. Pedizisai, middle left, coach crew members of the film "The Soul Searchers." The film is set up in three segments, and the crew was working on the second in which a young pregnant girl is walking down the street and is harassed by three men. Filming for the project was completed on Aug. 6. Photo: JEANA-DEE ALLEN · The State News

Wray, who began filming "The Soul Searchers" on July 25, focused on various parts of East Lansing and downtown Lansing to tape scenes for his movie.

"Lansing, just like the Midwest, is an undiscovered jewel," said assistant director K.I. Pedizisai. "I chose this location because it's the same storefront that you can find in Chicago or New York."

Writing the story for "The Soul Searchers" was completely unplanned, Wray said. There are three plots to the film which are all loosely connected, but the theme is held together by black humanity.

"We rarely see black folks depicted in a way that's expansive about humanity," he said. "It pisses me off and inspires me at the same time."

Wray is originally from northern Ohio, and he traveled to East Africa for two years with the Peace Corps before moving to East Lansing in 1998 to teach film at MSU.

"When I was traveling, I got to see a lot of works around the world and that was inspiring," he said.

Because he has directed many films, Wray said there is a special aspect to directing that stands out to him.

"With directing, you get to see it go from the page to flesh and bones," he said.

The cast and crew of "The Soul Searchers" is made up of about 35-40 people, including MSU students from film classes Wray teaches. Many of the crew members said Wray is good to work with and efficient.

"He's the kind of director you can approach," said actress Cecelia Birt. "He's easy to understand and does not talk at you.

"Jeff talks to you and explains what he wants, why he wants it and what it will do for the role."

Wray chose his crew through a variety of outlets. Much of the staff were his peers when he attended film school at Ohio University or met him through the movie industry after his last film, "China."

"The Soul Searchers" began preproduction on July 18 and has been ahead of schedule since, co-producer Charla Yingling said. Cast and crew finished filming the movie Aug. 6 and are raising more money before beginning on the postproduction.

Wray said he got money for the film from the National Black Programming Consortium, a group through the Corporation for Public Broadcasting. Additional funds came from the Kittredge Foundation and from the College of Arts & Letters at MSU.

Because the film had a small budget and was produced locally, the cast and crew will work together for the final product.

"It takes a lot of teamwork, and you need to put on multiple hats," actress Gwen Murray said. "I was out looking for wardrobes and helping out wherever I can.

"These productions are more of a jack-of-all-trades than bigger shots."

Wray plans to send the film to PBS so they can get the first viewing, but he also wants to take it to big festivals.

The enthused director said he hopes that those who will see the film will give it a second thought.

"I hope people are engaged so that (the movie) takes people in and makes folks think and examine things they don't often do," he said. "The Soul Searchers" is made up of three brief scenes.

The first segment, called "Get Thee Behind Me," is a story about an adolescent boy in the '70s facing the battle between good and evil as he begins to like girls but thinks the devil is out to get him.

"Two Pink Dots? You Positive?," is the second segment in the trilogy and is about a young girl who's pregnant and her journey through pregnancy.

The final segment, "Middle Skin," examines a middle-age couple going through the difficulties of a fading relationship.

Wray said the characters in "The Soul Searchers" deal with regular issues that are pertinent to everyday life. Some crew members said the three segments of the film are all connected through the "soul."

"There's a kid searching for people, the soul sister - which is the girl having the baby - and a soul mate, which is the part about the married couple," Pedizisai said.

This story has been posted in the following forums: : Headlines; COS - Kenya; African American Issues; Film