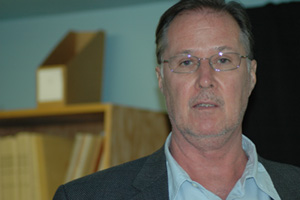 In 1966, at 20, Brown joined the Peace Corps in the fourth year of the program's existence. He was sent to Thailand and had the opportunity to travel all around Southeast Asia and through India. "It was really a golden period -- it was a fantastic experience for me," he says. The Peace Corps marked the beginning of his fascination with and respect for the cultures and religions he now works among: "When I'm in India, I'm a Hindu; when I'm in Southeast Asia, I'm a Buddhist," he says.

Art historian and curator Robert Brown takes the lead of the UCLA Center for Southeast Asian Studies as its new director.

Robert Brown's office at the Los Angeles County Museum of Art (LACMA) is behind an inconspicuous door in the back corner of the South Asian collection. When you walk in, you see industrial metal shelves lined with sculptures and religious artifacts; each item -- some originating from as long ago as 400 BC -- is matter-of-factly wrapped and tagged. A large, deep red Buddha sits in the middle of the room, surrounded by rich chests and furnishings. Paintings hang on the walls -- even the reprints and homemade pottery on his desk look old and distinguished in the context of the 2,500 years of material culture Brown surrounds himself with everyday. He says he likes having his office in storage because it makes the art always accessible.

And accessibility seems to be the secret to his success. In addition to being the curator of Southeast Asian art at LACMA and a UCLA professor of art history, Brown became the new director of the UCLA Center for Southeast Asian Studies this summer, following UCLA history professor Geoffrey Robinson's July resignation.

"[Brown] is an exemplary scholar, with the kind of publication record the rest of us can only envy,” says Ronald Rogowski, dean of the UCLA International Institute. "But he is highly unusual in combining a scholarly career with a major curatorial one.”

Outside Brown's LACMA office door is an exhibit of Indian landscape paintings designed by one of his own UCLA graduate students, Gianna Carotenuto. Carotenuto was part of a LACMA internship program that gave her the opportunity to do hands-on work at the museum while studying at the university. She has been Brown's student, in all, for nine years, from the time she was doing an honors project as an undergraduate student, through receiving her master’s, and now working toward her Ph.D. Brown has both a collector's eye and an academic's mind, she says, a combination that makes his teaching very effective.

Brown sees the art he works with as a way to tangibly grasp something far away. By working with these objects and teaching about them as well, he is able to provide this unique kind of access to his students: "What I do here [at LACMA] is what I do there [at UCLA]," he says. He gives the example of the Taj Mahal: Everyone has seen images of the building many times, but when you it in person, says Brown, it is always more than what you had expected.

It is for this reason that Brown emphasizes the importance of area studies, of learning about regions and cultures in depth by reading their literature and acquiring their languages. At the International Institute, he says, there are two camps: One takes this kind of area studies perspective, while the other chooses a more global approach, applying theories across cultures and countries. Brown says he is adamantly in the first group and believes that the role of CSEAS is to emphasize regional issues.

Brown says he would like to see the creation of senior and junior faculty positions in Southeast Asian studies. The Southeast Asian Studies major excellent faculty and a strong curriculum on Indonesia and Vietnam, he says, but more is needed on Thailand, Cambodia, Myanmar, and the study of Islam in the region.

Brown himself is one of the few art historians in the country who trains graduate students in South and Southeast Asian art history. He chooses students who are multi-faceted as he is: One student lived in Thailand and was a curator at a Bangkok museum before completing her Ph.D. last year; another is one of the few Westerners who has lived in Bhutan and speaks Bhutanese; a current student is the president of the Sri Aurobindo Center of Los Angeles, a spiritual center for followers of the modern yogi.

Brown is both dedicated to and daunted by his teaching career. He advises ten Ph.D. students who work on South and Southeast Asian art history. His introduction to the art of India and Southeast Asia, which enrolled 230 undergraduate students last fall, is one of the largest introductory South Asian art courses in the country. "[Undergraduate students] are really demanding," says Brown. "They demand that you do a good job."

Carotenuto, who worked in marketing atArtforum International Magazine, a publication about cutting-edge art from around the world, says that Brown's style of teaching is to make sure his students understand the basics and then to let them explore. "He's very concerned with making sure students understand the history," she says, "but what he allows for is experimentation, which is the key to intellectual thinking."

It was Brown's own experimentation that brought him to study South and Southeast Asia in the first place. In 1966, at 20, Brown joined the Peace Corps in the fourth year of the program's existence. He was sent to Thailand and had the opportunity to travel all around Southeast Asia and through India. "It was really a golden period -- it was a fantastic experience for me," he says. The Peace Corps marked the beginning of his fascination with and respect for the cultures and religions he now works among: "When I'm in India, I'm a Hindu; when I'm in Southeast Asia, I'm a Buddhist," he says.

When he returned to the United States in 1970, at the height of the Vietnam War, he was drafted into the army. But he was not sent back to Southeast Asia. Because he had been in the Peace Corps he could not be a part of U.S. intelligence so he was sent to Hawaii to work at a large communication hub for three years. "I ended up staying in Hawaii running a big computer," he jokes about his time as a soldier.

His interest in Southeast Asian did not wane, though. He went back to school and received his Ph.D. in art history from UCLA in 1981. He was the South Asia curator at LACMA until 1986, when he became a UCLA professor. In 1996, he published The Dvaravati Wheels of the Law and the Indianization of South East Asia (Brill Academic Publishers). When CSEAS was founded in 1999, Brown was on the committee that hired the Center's first director, former UCLA history professor Anthony Reid. He then rejoined LACMA in 2000 as the curator of the Southeast Asian collection.

This story has been posted in the following forums: : Headlines; COS - Thailand; Art; Art History; Asian Studies