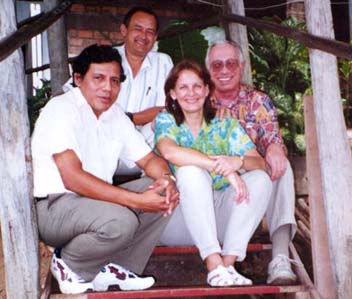 Ceiba Tops is where we found Jenson, who started the venture 40 years ago. A one-time anthropologist-Peace Corps volunteer, Jenson has slowly built up from a single cruise boat to 20 vessels and five lodges offering 500 beds. With more than 150 guides, cooks, boat handlers, barmen and such, he said he’s the biggest employer in the Iquitos region. His 22 English-speaking guides all come from the Amazon area.

Perils of the Amazon

Don’t worry about the hungry piranhas and mosquitoes, but watch out for those too-cute monkeys

“There’s nowhere near as many mosquitoes here as there is in Wisconsin,” said Jenson, who left that state a long time ago. “And it’s not as hot as Washington, D.C.”

And let’s get this out of the way, too: When you jump into the shower to freshen up, don’t expect hot water. This luxury will be found, along with indoor plumbing, electricity and air conditioning, only at the more developed Explorama stop at Ceiba Tops, closer to Iquitos, that Jenson has built for the less hardy.

I simply time-channeled back to Boy Scout camp (yes, Mom, I did too wash!) when dealing with the filtered but cold river-water showers: Start with your arms, then soap and rinse your legs, stick in your head, and acclimation completed, sorta, leap in to finish off.

Don’t worry about those bats fluttering above. They’re just helping out with the mosquitoes.

Remember, the wildlife is why you’re down here.

Besides the bats, a big tapir may visit, tapping down the plank walkways late at night or visiting the lodge for banana handouts, her wilder boyfriend watching jealously from the forest fringe.

Macaws and green parrots also hang around; humming birds do their thing. The morpho butterflies compete with passion flowers for most beautiful and exotic.

At nights, the Explorama guides will take you in boats to spotlight perched birds and frogs. One evening, the walkway was shared with a saucer-sized tarantula.

We also took a swim, and the kids had a mud fight in a channel of the Amazon. We visited villages of ribereños, the people who make a subsistence living on small plots along the rivers.

Blowguns — demonstrated by Yagua Indians wearing their traditional fiber skirts for the tourists — were a particularly sought item. (Poison-arrow frogs not included.)

It was one of those moments when the parenting handbook pretty much goes out the window.

The school supply gifts we brought for the Sapo-Playa (Frog Beach) village children had been distributed, the Peruvian flag had been raised with great solemnity, the anthems had been sung, the dancing had gone on and on, the soccer game had been played with the very talented local kids. It was time to head to the boat.

“Kerry’s bought a monkey,” one of her classmates informed me. I didn’t doubt her for a moment.

Yep, there it was. A golf-ball-sized black-and-white face, serious and alert, looking out from Kerry’s cupped hands.

I knew it wasn’t good to buy jungle animals. It just encourages the villagers to go back into the forest and restock their shelves for tourists, depleting the species. Kerry’s take on it was that she had rescued it from mistreatment. She immediately agreed the trilling tamarin would go back to the jungle at an appropriate time and place. I couldn’t tell her, no, give it back. Besides, he was really cool.

This story has been posted in the following forums: : Headlines; COS - Peru; Tourism; Eco-Tourism