Peru RPCV Dr. Domenick Maglio has developed a comprehensive strategy to strengthen Americans' morality and lead them back to a life of traditional values 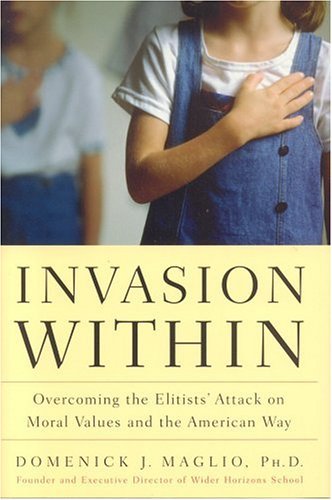 In his book, Maglio lists several recommendations that he feels will help Americans win the "cultural war" that threatens their morality. Those recommendations include praying to God, being patriotic, ensuring children receive a traditional education, being good role models and saying what we believe, even if it's not politically correct

Peru RPCV Dr. Domenick Maglio has developed a comprehensive strategy to strengthen Americans' morality and lead them back to a life of traditional values

Dr. Domenick Maglio has a plan. The local psychotherapist and founder of the Wider Horizons School in Spring Hill has developed a comprehensive strategy to strengthen Americans' morality and lead them back to a life of traditional values. He outlines his plan in his new book, "Invasion Within: Overcoming the Elitists' Attack on Moral Values and the American Way." In the book he takes a strong stance on everything from child rearing and discipline to political correctness and the media's role in our culture. No topic is too taboo for Maglio. And while some of his views are controversial, he has become a well-known figure on the TV talk circuit, including Fox News. Still, on a day-to-day basis, he is interacting with about 200 Hernando County children. It is his love for children and interest in their futures that guides this husband, father, grandfather, educator, writer and psychologist.

A childhood of lessons

Dr. Maglio has a colorful background that has sculpted his belief system into what it is today. A native of Brooklyn and eldest son of a plumber, Maglio said he grew up believing in traditional American values. Maglio said his father was an abusive alcoholic, and in his book he describes how his father was demeaning and told him he was worthless. "When I was 9 years old, I felt like I was in the most pitiful existence that you could imagine." But Maglio said his parents still taught him right from wrong. As he grew older, he started to appreciate his blessings and the fact that his father, for all his faults, was a hard worker. He said he came to believe that people could overcome anything if they were willing to work hard and sacrifice. "In Brooklyn, N.Y., it was tough. You had to be tough. You had to fight. You had to make choices." Maglio said he kept a tough exterior on the streets but, in private, he dove into his schoolwork. "I wanted out of my neighborhood." He was the first in his neighborhood and first in his family to go to college. He graduated from a state university, New York at New Paltz, with a bachelor's degree in secondary education. He later earned a master's in childhood and family relations and a doctorate in human development.

Changing with the times

In college, Maglio's traditional views were put to the test. It was the 1960s and society was changing. The idealistic 1950s were giving way to a more radical era where social norms were questioned. At that time, he said the belief was that quality time with children was more important than quantity time. For instance, an exciting trip to Disney World with the family was believed to be more important than being home with children each evening to spend family time together. Maglio said many people still falsely believe such a notion. "And because of that, the nonsense of the '60s is putting our kids in tremendous danger." Maglio said there's also a lingering disrespect for marriage. He said that in the '60s divorce rates started to rise, but experts didn't see the dangers of divorce for children. "They said an amicable divorce won't have an adverse effect on children." Maglio said research since then has proven that theory to be inaccurate. He said another theory he was taught in college, but now believes to be ridiculous, is the idea that children can be best helped by positive reinforcement. Maglio said that's too easy. Children should get positive reinforcement when they earn it. "Kids need to earn those positives," he said. "I call that false esteem." Maglio met his wife, Julie, when he was a senior at college. After graduation, he taught for a year while she finished school. Then they both joined the Peace Corps and together spent a year in Peru establishing schools. "We were idealistic," he recalled. "At that time, Kennedy had a great impact on people and we wanted to make the world a better place." The Maglios have now been married 40 years and have four children and four grandchildren. Maglio said it was during his time in the Peace Corps, when he visited poverty-stricken countries, that he realized America was the greatest place on Earth. He said he slowly started to return to his traditional roots and re-embraced the social values he was taught as a boy. In his book, Maglio uses the term "elitist smuggers" to describe those who he claims are trying to rob Americans of their moral values by infiltrating the corporate world, schools, the media, churches and our homes. Hence the title of the book: "Invasion Within."

Maglio said that after returning from the Peace Corps, he and his wife knew they wanted to start an alternative school that took education back to its basics. They started Wider Horizons 23 years ago with the help of their children. There, the students aren't coddled. "What we give is honest evaluation of students. We have high expectations. We also focus on character development as well as academics." Maglio said his students, kindergarten through 12th-grade, are expected to learn public speaking, a high level of reading and writing and a large dose of higher mathematics. And true to his belief that drugging children isn't the way to deal with behavior issues, Wider Horizons doesn't allow its students to be on drugs for anxiety, depression or hyperactivity. "Drugging children into submission is absolutely disgusting to me." There are also no organized sports at the school. "We don't have a lot of bells and whistles that you have in other schools." Maglio said the school's back-to-basics approach works, even for the most troubled students. Giving children everything they want is part of the problem with kids today. He said putting them in front of video games and television gives the parents more free time, but robs children of parental lessons about right and wrong. "The permissive, materialistic way of raising children is undermining their moral development." And Maglio has some ideas on how to change that trend.

Putting his plan into action

In his book, Maglio lists several recommendations that he feels will help Americans win the "cultural war" that threatens their morality. Those recommendations include praying to God, being patriotic, ensuring children receive a traditional education, being good role models and saying what we believe, even if it's not politically correct. Maglio said it's more important to live a good life than an exciting one. "Be proud to live a stable, loving and boring existence. If you're living the 'right' life, it's not going to be very exciting most of the time."

This story has been posted in the following forums: : Headlines; COS - Peru; Morality