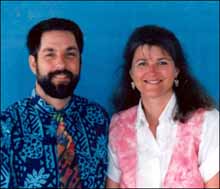 The incident's aftermath has caused deep strains between Washington and Indonesia and triggered a battle of wills between President Bush—who considers the world's largest Muslim nation a key ally in the war on terrorism—and his Republican allies in Congress. The outcome may depend on the Fed eral Bureau of Investigation and its probe of the ambush, in which the Indonesian army has emerged as a prime suspect.

News: An ambush in Indonesia killed Patsy Spier's husband–and landed her in the middle of a foreign-policy minefield.

August 31, 2002, began as a day like any other in the lives of Patsy and Rick Spier. They were teaching school in West Papua, Indonesia, the latest posting in a series of international teaching jobs far away from their home in Denver. The long stays in isolated places worked for the Spiers "because we really liked each other," Patsy says, recalling the years before the tragedy that transformed her into a citizen-lobbyist and an expert on the intricacies of U.S.-Indonesian relations.

That afternoon, the Spiers and eight other teachers working for a school operated by New Orleans-based Freeport-McMoRan Copper & Gold decided, on a whim, to go on a picnic. Driving two SUVs with company markings, they wound their way deep into the mountaintop region where Freeport operates a huge mine that is patrolled by Indonesian soldiers on the company payroll. On their way back, they were ambushed by gunmen hiding alongside the road. "I saw two poofs and that's when I was shot in my back," recalls Spier, who almost bled to death. When the shooting was over, three people were dead: the school's superintendent, another teacher, and Rick Spier.

The incident's aftermath has caused deep strains between Washington and Indonesia and triggered a battle of wills between President Bush—who considers the world's largest Muslim nation a key ally in the war on terrorism—and his Republican allies in Congress. The outcome may depend on the Fed eral Bureau of Investigation and its probe of the ambush, in which the Indonesian army has emerged as a prime suspect.

Within 24 hours of the shootings, the ar my declared the crime the work of a separatist group that hopes to create an inde pendent state in West Papua. But that story fell apart after the local police chief announced that the evidence pointed toward the military itself. (One motive may have been revenge for Freeport's decision to cut back payments to the army; two Freeport executives, who may have been the killers' intended targets, had driven down the mining road just minutes before the Spier party passed by.) At a meeting in Bali last October, however, President Megawati Soekarnoputri told Bush she had seen no proof that the army was involved. A Freeport spokesman would not comment on the case except to say the company is "fully cooperating with the investigations."

Spier, who is 47, retains the friendly and open air of the elementary school teacher she once was. But she hasn't set foot in a classroom since the ambush; her job now is to serve as a de facto spokeswoman and advocate for the survivors. "I got back to Colorado on September 21, and on the 24th, I started calling people in the government," she says. "It was like I knew how huge this was, how evil." On her many trips to Washington, she has met twice with Deputy Secretary of Defense Paul Wolfowitz, as well as with senior officials in the State Department and the FBI, including FBI director Robert Mueller. Through her perseverance, she has kept the issue alive—and convinced many Republicans, as well as Democrats, to vote to link U.S. military aid to Indonesia to justice for the ambush victims. "It's the only leverage we can use," she says.

But Spier's appeals have come at an awkward time for the administration, which is seeking to expand military ties with Indonesia despite its army's reputation for brutality. In particular, the White House wants Congress to lift the restrictions on military training funds first imposed in 1991 in response to Indonesian army abuses in East Timor, the former Portuguese colony Indonesia invaded in 1975. Bush stepped up the pressure for cooperation after a series of bombings in Indonesia by groups linked to Al Qaeda.

In January 2003, following intense lobbying by administration officials, the Senate voted to fund the military training program. Then, as the year went on, Congress began hearing reports that the FBI's probe was meeting strong resistance. Agents, for example, were allowed to interview Indonesian witnesses only when army officers were pres ent. "From what I understand, the answers have been pretty well rehearsed and scripted," says Senator Wayne Allard (R-Colo.).

Last November, Allard, who has met with Spier several times, joined forces with Senator Russell Feingold (D-Wis.) to draft legislation prohibiting Indonesia from receiving the training funds until the State Department determines that the army has been cooperating with the FBI. Despite White House opposition, the amendment was expected to pass the Senate this spring—a remarkable victory for Spier, who says she has surprised even herself with her ability to work the system in Washington. In one telling incident, in October, President Bush told an Indonesian reporter that he was ready to go forward with full military ties with Indonesia because Congress had "changed their attitude" on military aid. Spier, in town to press for the Allard amendment, hit the phones. Six days later, the White House retracted Bush's statement, saying that no new military programs had been approved. "They really backtracked," says a congressional aide. "Patsy really set the wheels in motion."

Still, the outcome of the matter is far from clear. Even if the FBI decides that the Indonesian military was responsible for the murders, it's unlikely that Indonesia would turn over a senior officer for prosecution, and the military courts it has established to try army officers are widely viewed as ineffective. "What they do is, they allow a case to go to trial, but they will produce scapegoats," says Ed McWilliams, a former political counselor in the U.S. Embassy in Jakarta and one of a handful of human rights activists in Washington focused on Indonesia. "In the past, we've gone along and allowed this to go forward. My concern is, this time it would be different, because [if not] we'd be conspiring in a case that involved the death of American citizens."

That's what keeps Spier focused. "Whoever did this was arrogant enough to think they could get away with it," she says. "So what in God's name are they doing to the villagers and the average Indonesian who doesn't have a voice?"