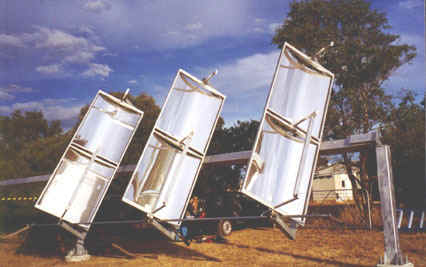 The design uses readily available parts and tools. For example, both the feed pump and steam turbine are actually power-steering pumps used in cars and trucks. To generate electricity, the team uses an alternator, which is not as efficient as an ordinary generator, but comes already designed to charge a battery, which reduces some of the complexity of the system. And, like power-steering pumps, alternators, including less-expensive reconditioned ones, are easy to come by.

How To Build a Solar Generator

Demand for solar power is rapidly heating up (see "New Solar Technologies Fueled by Hot Markets"). But constructing and deploying large photovoltaic panels to generate electricity remains expensive. Now two groups at MIT are working on alternative approaches to solar-based electricity that could significantly cut costs -- and put the ability to harvest electricity from the sun into the hands of villagers in poor countries and backyard tinkerers alike.

During a stint in the Peace Corps in Lesotho in southern Africa, Matthew Orosz, an MIT graduate student advised by Harold Hemond, professor of civil and environmental engineering, learned that reflective parabolic troughs can bake bread. Now he plans to use these same contraptions to bring power to parts of Africa baked in sun but starved for electricity. His solar generators, cobbled together from auto parts and plumbing supplies, can easily be built in a backyard.

The basic design of Orosz's solar generator system is simple: a parabolic trough (taking up 15 square meters in this case) focuses light on a pipe containing motor oil. The oil circulates through a heat exchanger, turning a refrigerant into steam, which drives a turbine that, in turn, drives a generator.

The refrigerant is then cooled in two stages. The first stage recovers heat to make hot water or, in one design, to power an absorption process chiller, like the propane-powered refrigerators in RVs. The solar-generated heat would replace or augment the propane flame used in these devices. The second stage cools the refrigerant further, which improves the efficiency of the system, Orosz says. This stage will probably use cool groundwater pumped to the surface using power from the generator. The water can then be stored in a reservoir for drinking water.

The design uses readily available parts and tools. For example, both the feed pump and steam turbine are actually power-steering pumps used in cars and trucks. To generate electricity, the team uses an alternator, which is not as efficient as an ordinary generator, but comes already designed to charge a battery, which reduces some of the complexity of the system. And, like power-steering pumps, alternators, including less-expensive reconditioned ones, are easy to come by.

As a result, the complete system for generating one kilowatt of electricity and 10 kilowatts of heat, including a battery for storing the power generated, can be built for a couple thousand dollars, Orosz says, which is less than half the cost of one kilowatt of photovoltaic panels.

"You can't afford something that's designed for solar. You have to buy something that's mass-produced for something else -- that way the cost is reasonable," says Duane Johnson, owner of Red Rock Energy, in White Bear Lake, MN, who developed and sells thousands of the inexpensive LED-based sun-tracking devices Orosz uses to orient the solar concentrators. Most of the devices are used to position photovoltaic panels, he says, but some people are using them with old satellite dishes to concentrate heat and make steam. Sales of his devices have been growing 25 percent a year, a rate similar to that of the solar photovoltaics industry.

Repurposed auto parts aren't the only way to go. Amy Sun, a graduate student in MIT's Media Lab, has designed an inexpensive system that uses heat from a solar concentrator to drive a type of turbine originally patented by Nicola Tesla. Rather than making complex, difficult-to-manufacture bladed turbines, Sun turned to the Tesla turbine, which consists of simpler flat disks stacked like records on a central shaft. The disks are carefully spaced to allow steam to flow between them. As the steam flows, friction between the steam and the surface of the disks causes them to rotate. "Once I have rotational shaft work, I can couple it to almost anything -- an air pump, compressor, fan, mixer, grinder, sewing machine, refrigeration compressor, and, to power those very few things that are truly electric in nature, an electric generator." She calculates that this system, which she says is simple enough for an eight-year old to make, can produce cheap power.

Of course the overall economics of these solar generator systems depend on how long they will last and how much maintenance they will require. The lifetime for Orosz's system could be quite good, since it uses parts designed for rugged service in vehicles. It also works at relatively low temperatures that, in addition to making it safer and easier to work with, won't strain the performance limits of the plumbing used.

Having already built a working prototype, Orosz's next step, which he hopes to accomplish starting this September in Lesotho, is to optimize manufacturing and set up a financing system, drawing on a recent $100,000 World Bank grant, to make the system affordable to villagers who would likely use the generator in a community center and as a battery-charging station.

Although their system was originally designed for Lesotho, Orosz and his colleagues believe it might appeal to amateurs elsewhere. "Backyard tinkerers could build it themselves. No doubt about it," says Amy Mueller, an MIT graduate student who's taken on a leading role in Orosz's project. "Matt's dad has one of these that we built to heat his Jacuzzi."

This story has been posted in the following forums: : Headlines; COS - Lesotho; Energy; Solar Energy

Can any body put us in touch with Matthew Orosz,
we wish to get in touch with him desparately !
Please help.
P.O.Box 194 Gyadi-Em
kano state
Nigeria