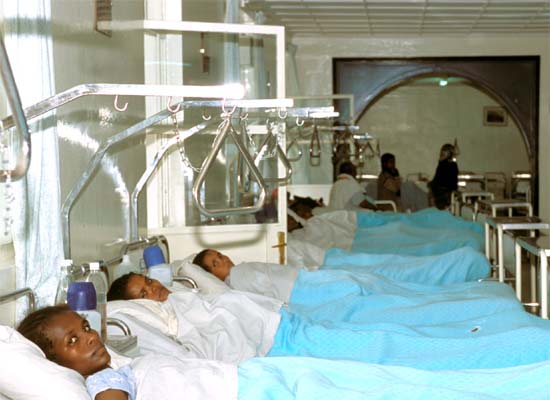 Like most Americans at that time, Haas had no clue the problem existed. Then he and his daughter, Shaleece, visited the Addis Ababa Fistula Hospital, founded in 1974 by an Australian couple who were both physicians and missionaries. Dr. Catherine Hamlin, now in her 80s, is still performing surgeries there.

Ric Haas' 1999 visit to Ethiopia was meant to be a nostalgia trip, a return to the place he'd worked as a Peace Corps volunteer 30 years earlier.

Instead he was confronted with a horrific medical condition, called obstetric fistula, that dooms women to live as outcasts. The San Jose financial planner came home with a mission: to help those desperate women regain their health and their lives.

``I said, `I live in Silicon Valley, and there's more money there than anywhere in the world,' '' Haas recalled.

Today the group he founded, the Santa Clara-based Fistula Foundation, is the only U.S. source of funding for helping women with fistula in Ethiopia.

Its headquarters on Homestead Road doesn't look like much -- a tiny office with a handful of staff members -- but the foundation has raised more than $6 million and had a big impact on a seemingly intractable health crisis.

Obstetric fistula is an injury caused by long, drawn-out labor, especially in very young women. When blood supply to the vagina and bladder is cut off, tissues die and a hole forms, allowing urine and sometimes feces to leak out uncontrollably. Adding to their misery, their babies usually die.

A thing of the past in the United States and the rest of the developed world, where caesarean sections are available to end difficult labors, obstetric fistula affects an estimated 2 million women in developing countries, according to the World Health Organization.

Like most Americans at that time, Haas had no clue the problem existed. Then he and his daughter, Shaleece, visited the Addis Ababa Fistula Hospital, founded in 1974 by an Australian couple who were both physicians and missionaries. Dr. Catherine Hamlin, now in her 80s, is still performing surgeries there.

More than 25,000 women have since been treated at the hospital; no one is denied care.

Haas said he was blown away by their stories. Many patients had been divorced by their husbands and shunned by their communities. Some had lingered that way for months or years.

``The fistula hospital was this little Garden of Eden,'' Haas said. Full treatment includes surgery, mental health services and, when they're ready, a new dress and a bus ticket home.

Some patients are trained and given jobs as nursing assistants. One of the hospital's first patients, an illiterate woman who stayed on for three decades after her recovery, now performs surgeries.

Dr. Larry William, an internist and oncologist from Los Altos Hills who serves on the foundation board, took photos of the hospital and its patients that were sold at a benefit in May, raising close to $8,000.

In one poignant image, four patients sit in a row before having surgery, puddles of urine beneath their feet.

``These pictures are always taken in an enormous hurry with people I didn't know before,'' William said. ``They were done through sign language and pantomime. It often astonishes me what comes out of that camera.''

On an international level, the Campaign to End Fistula, a global initiative of the United Nations Population Fund, has raised $9.8 million since 2003, most of it from governments. It covers 35 countries in sub-Saharan Africa, South Asia and the Mideast.

Fistula is ``an important issue on its own and as a barometer of women's maternal health around the world,'' said Kate Ramsey, spokeswoman for campaign. But she said it will take a lot of time and sustained investment to build a solid medical infrastructure, such as the one in Ethiopia, to stem the rate of 100,000 new fistula cases annually around the world.

In countries such as Eritrea that lack that infrastructure, fistula patients rely on teams of traveling surgeons who visit a few times a year.

``A month before we go there, the Ministry of Health sends out radio announcements and all these women come together at this one hospital,'' said Dr. Amreen Husain, a gynecologist and surgeon at Stanford University Medical Center who volunteers with the Stanford Eritrean Women's Project. ``One hundred fifty women come, and we can only operate on so many. They have to get special housing, and we end up taking up a whole hospital, so all the other care gets diverted somewhere else.''

In contrast, the effort in Ethiopia is much more advanced.

The main hospital has become a training ground for doctors around the world. Women sleep in cozy bungalows on the hospital grounds and enjoy lush gardens. There are plans to open five mini-clinics in remote areas of the country so women don't have to walk for days to find care. It costs about $450 to treat one woman.

Many of those accomplishments are funded by private donors -- people who, in the last three years especially, have come to know about fistula through media coverage or the Oprah Winfrey show, which has twice highlighted the issue.

``What's heartening is Americans are very generous people, and when you open their hearts and minds to fistula, the agony and desperation, their wallets follow,'' said the Fistula Foundation's executive director, Kate Grant.

One Baptist congregation in Detroit collected $25,000. A couple in Arizona has given nearly $7,000 to the Fistula Foundation by way of tithing.

``I'll never forget one letter that came from a woman who had seen Oprah and sent a money order for $12,'' Haas said. The woman was an out-of-work single parent.

``To imagine having that condition, being a woman myself, I had no words to describe it. I was stunned,'' Lassalle said. She organized a benefit luncheon and invited a few girlfriends. The group donated $1,120.

``My goal was to raise enough money for two women's surgeries,'' Lassalle said. ``We exceeded that.''

This story has been posted in the following forums: : Headlines; COS - Ethiopia; Service; Medicine; NGOs; Fistula

I am Dr. Bakri El Mahi, Gynaecologist and Fistula Surgeon ,from Sudan,Fistula also is major problem in our country ,we have the second Fistula center in Africa,we look forward to your support. Thanks