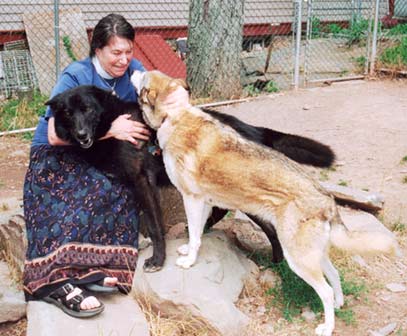 To date, the wolf has proved to be a teaching and a pastoral opportunity for the parish. Thus far, the law rather than the parish and the local residents has presented the only serious problem. Unlike the state of Idaho, where wild four-footed carnivores are a bit more commonplace, New York State rather severely regulates the ownership of a wolf. At the present time, only LaLiberte is allowed near Singer, so that although Singer and Pt’chee come in the house at night, during the day they are confined to their run alongside the rectory.

By the Rev. Dr. Clair McPherson

Caption: LaLiberte with her wolf, Singer, and her Husky, Pt'chee Photo: TACHUS MEDIA

It was practically over, and the search committee was indeed impressed with her obvious qualifications: years of experience as an ethically aware newspaper writer; an early mission with the Peace Corps in Peru – where she became “cynical” about the church; a stint as a journalist in Latin America – where the liberation theologians brought her to a new appreciation of the church as a force for good; a substantial seminary education at the Church Divinity School of the Pacific; and several years’ service to various parishes in Idaho and California, including a stint ministering to, and learning from, Native Americans on the reservation. The Rev. Joan LaLiberte felt the rightness of it all; that congruent, secure sense you get when the Holy Spirit is clearly present and at work.

But there was one more subject—one very big subject—that she had to mention. “There is one more thing I have to tell you,” she said. “I have a wolf.” LaLiberte does indeed have a wolf—a 7-year-old great black wolf named Singer – and he does sing from time to time. In addition she has a Husky, Pt’chee, which means “baby” in Machief, a Cree-French argot.

A wolf’s jaws have five times the clasping strength of a German Shepherd’s or a pit bull’s, but Singer has never used those jaws on any creature, despite a few sad months when he was fed raw meat and kept chained up all day by an inhumane owner. The authorities called Joan when they found Singer. She asked, “What will happen to him if I don’t take him?” “We shoot him tomorrow,” was their reluctant answer. LaLiberte looked into Singer’s soft yellow eyes and she knew that was no longer any question of execution at dawn.

But now she was contemplating a new parish in the Episcopal Diocese of New York. You never know, after all, how human beings will react to a wolf or to the idea of one.

"Great!” was the response by the members of her new parish at St. James, Callicoon. From the start, they intuited the truth of the matter. Singer would be an asset, not a liability; a plus, not a problem. And the parish showed appreciation and support from the very start. Marjorie Lentsch, now a parishioner at St. John’s, Monticello, helped with regulations, got state and federal phone numbers and supervised the dog yard construction. Helga Andkjar, then junior warden, helped with the organization. Mary Curtis, a life-long member who belongs to one of the founding families of the parish, helped with local zoning applications. Susan Treanor built Singer and Pt’chee a sturdy, handsome wolf-dog house — single-handed.

“The entire congregation has been supportive, and everyone stops to talk to Singer and Pt’chee,” LaLiberte said. It is “a powerhouse congregation,” in LaLiberte’s opinion, and Singer might concur.

The congregation, a mix of life-long local residents and “city-dwellers” with weekend homes, was without a priest for two years. This is an unusually long hiatus, but LaLiberte feels the wait enabled the congregation to learn what they are capable of. These factors make the parish very creative and rich with possibilities, LaLiberte explained.

To date, the wolf has proved to be a teaching and a pastoral opportunity for the parish. Thus far, the law rather than the parish and the local residents has presented the only serious problem. Unlike the state of Idaho, where wild four-footed carnivores are a bit more commonplace, New York State rather severely regulates the ownership of a wolf. At the present time, only LaLiberte is allowed near Singer, so that although Singer and Pt’chee come in the house at night, during the day they are confined to their run alongside the rectory.

“It’s a shame,” she asserted, “and unfair. I can’t even take him for a walk. Singer is, as anyone can see, as gentle as can be — a big playful mutt. In fact, the idea of the ‘big bad wolf’ is one of many misconceptions about wolves. Another is that they howl at the moon. They don’t. But one of the local dogs does, and Singer started to imitate him the other day. I told him, ‘Now you’re reinforcing that stereotype.’ However it came about, it isn’t true. If Red Riding Hood were to come by, Singer wouldn’t eat her—or Grandma. What he very well might do, though, is steal the picnic basket. Wolves are thieves—not killers.

“Native Americans, by contrast, have an attitude of respect, even reverence, for wolves,” LaLiberte explained. “Mahegan — spelled ‘Mohegan’ around New York — means wolf. Wolf for the native American is friend and brother.”

Still, Singer is a formidable animal. LaLiberte pulled back Singer’s gum to reveal a razor-sharp, two-inch canine tooth. Singer weighs about 80 pounds and measures some 60 inches from shoulder to haunch. This is small for a wolf since adults can reach 130 pounds and six feet in length. Still, any human used to the company of dogs will be impressed with Singer’s size. His breed is gray wolf — with a slight mixture of German Shepherd — perhaps a great-great grandfather. But his color is black— the silver-gray only shows at the roots – with a white chest and a few white toes.

So what exactly is Singer’s role at his new parish? “He’s a companion, a friend.” LaLiberte explained. “He’s really very, very human-oriented. In fact, he is a tremendous asset in pastoral counseling! A woman who has taken some abuse, for example, can fin a lot of empowerment just by petting a wolf.”

LaLiberte emphasized, however, that Singer is a third- or fourth-generation tame wolf — not a foundling from the wild. “I want to stress the fact that I do not believe in raising wild animals,” she said. “They belong in their wild habitat — they are not meant to live with us. Singer, on the other hand, could never survive in the wild. He belongs here, with Pt’chee and me.”

While wandering through the Cathedral of St. John the Divine, LaLiberte had a moment of truth, about New York, her wolf and the Church. “God has a way of sneaking up on me,” she explained. “There I was, taking in all the nooks and crannies at the Cathedral, when lo and behold, I came upon this statue of a wolf [the sculpture of St. Francis’ Gubbio wolf]. I thought, ‘How fitting!’ and then I noticed a legend: ‘donated by the Singer family.’ In an instant, I knew I was home.”

This story has been posted in the following forums: : Headlines; COS - Peru; Religon; Animals; Wildlife; Wolves