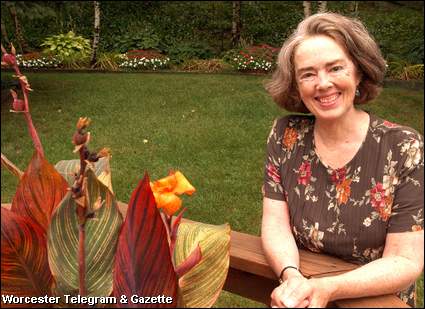 Ms. Swain has dedicated herself to introducing that way of interacting to as many people as possible. To that end, she has developed two certificate training programs based on a strategy she developed called Reconciliation Leadership. She offered the programs at the U.N. for three years, drawing 75 people. “I teach people to reflect on their lives so we don’t have to have a crisis to care about one another and find out what’s really important,” she said. Those who wish to practice Reconciliation Leadership must first look within themselves, digging past societal pressures and conflicts to tap into their true desires and goals. The outcome, Ms. Swain said, should be an inner harmony and an understanding of one’s true calling in life.

Caption: Worcester author Virginia Swain has developed training programs based on a strategy she has developed called Reconciliation Leadership. She teaches people to tap into their true desires and goals and to focus on the things that are really important. (T&G Staff/MARK C. IDE)

Virginia Swain was at the United Nations on 9-11 when terrorists slammed planes into the World Trade Center and the Pentagon.

“It was terrifying,” she said. “Everyone thought the U.N. would be next.”

Ms. Swain wanted to let her husband, Dr. Joseph P. Baratta, a professor at Worcester State College, know that she was all right. The U.N. had closed down, and she did not have the money to make a phone call. A waitress in a coffee shop handed her $5 in coins.


Ms. Swain was talking with a police officer when the twin towers fell. He had his radio on, and they both heard the panic and screams of fellow officers. Ms. Swain stayed with him for several hours; they remained in touch for months afterward.

Something important happens to people in a crisis, Ms. Swain observed the other day.

“We care about each other differently,” she said. “We forget about petty divisions and find out what’s important. In a crisis, people open up to each other; they share, they listen.”

Ms. Swain has dedicated herself to introducing that way of interacting to as many people as possible. To that end, she has developed two certificate training programs based on a strategy she developed called Reconciliation Leadership. She offered the programs at the U.N. for three years, drawing 75 people.

“I teach people to reflect on their lives so we don’t have to have a crisis to care about one another and find out what’s really important,” she said.

Those who wish to practice Reconciliation Leadership must first look within themselves, digging past societal pressures and conflicts to tap into their true desires and goals. The outcome, Ms. Swain said, should be an inner harmony and an understanding of one’s true calling in life.

“There’s a certain stage in which people are open to relearning a way of being,” she said. “Many people find their lives and goals have failed. They find out self-aggrandizement doesn’t work. It is alienating. It separates us from the people we care about.”

Ms. Swain, a counselor and teacher with a gentle manner and a soothing voice, sat in the book-filled study of her home high in the hills of Worcester’s West Side as she talked about her philosophy and her own journey to inner peace. She recounts her experiences in her autobiography, “A Mantle of Roses,” which was published three years ago by Xlibris.

“I don’t believe you can change another person,” she said, adding that she is an adherent of Mahatma Gandhi’s philosophy, “You have to be the change you want in the world.”

This fall, through her Institute for Global Leadership, Ms. Swain is offering the Reconciliation Leadership programs close to home as well as in New York. Several courses will be held at the Higgins Center at Clark University and others will convene at the U.N. The basic program focuses on personal and interpersonal skills; the advanced program concentrates on how to influence leaders, teams and institutions.

Ms. Swain, who has participated in activities at the U.N. for 16 years, developed the programs in cooperation with Anwarul K. Chowdhury, U.N. undersecretary general and high representative for the least developed countries, landlocked developing countries and small island states. Their offerings have attracted people from diverse cultures, many of whom have been connected to educational and nongovernmental organizations.

“I was impressed by the commitment of those who came into the courses, and, after the courses, the way they went out,” Mr. Chowdhury said by telephone from New York. “It strengthened their determination to resolve conflict through discussion and exchange of views and understanding each other’s points of view.”

Sarah Sayeed came across Reconciliation Leadership in her search for a path to positive action after 9-11. A Muslim, she felt victimized and under siege. She was a professor of communications at Baruch College in New York City; she questioned what she was doing with her life.

“I was looking for tools and ways to bring resolution to conflict and respond better to the crisis that is prevalent,” she said.

She decided to teach part time while writing a column for a Muslim weekly publication and serving on the boards of two organizations dedicated to issues affecting Muslims. The courses, she said, “made me feel I could do something I would find meaningful.”

Ms. Sayeed and Ms. Swain are currently co-writing an article on peaceful resolution to conflict for the Association of Conflict Resolution Journal.

Ms. Swain’s own story is one of sadness, self-reflection, and, ultimately, personal and marital fulfillment. She was in her 30s and a corporate executive when she felt her life falling apart.

Her younger brother called one day, saying he desperately needed to see her. Busy at work, she put him off. He was killed in a car accident the next day. Her father died within a year, and her marriage ended. She knew it was time to step back and reassess her life.

Ms. Swain went on a silent retreat on Mount Tamalpais outside of San Francisco.

“I was frightened to be alone,” she recalled. “But I felt I was missing something in my life that I had to discover. I was sitting on the mountain and taking in the beauty every day. It had such a sense of peace and fulfillment. As I left the mountain, I had resources that I trusted.”

Through periods of disappointment and fulfillment, Ms. Swain persevered in her search for what she calls her “true vocation.”

It was in 1990 that she began her affiliation with the U.N. A woman who worked there happened to sit next to her on the train. They developed a friendship, and Ms. Swain attended conferences and met a range of people connected to the organization. “I learned that titles and roles keep people at the U.N. from their goal to abolish war,” she said.

With financial backing from supporters, Ms. Swain, who had once been a Peace Corps volunteer, attended the Earth Summit in Rio de Janeiro in 1992. Thus began her work in international circles.

As time went on, Ms. Swain completed her master’s degree at Lesley University, developing an independent study project on community building in organizations. She and Dr. Baratta married in 1995.

Ms. Swain and her husband moved from Cambridge to Worcester in 1999. From 2000 to 2005, she coordinated a peer mediation program at Burncoat High School. She also developed a private counseling practice.

Brooke Belcher Bishara, a teacher at Bancroft School, remembers that she came to Ms. Swain for vocational counseling.

“I thought there was something very wrong with the way the world is running, and there had to be something I could do,” Ms. Bishara said from Lausanne, Switzerland, where she is spending several months with her husband. “I need to live with a real intention to try to save humanity, something connected with what goes on in the world.”

Ms. Bishara took a two-day course focused on self-examination. She loved it and wanted to continue with the Reconciliation Leadership program. The basic course of study costs $3,995, so she applied for and won a Fargo-Gauthier fellowship from Bancroft.

Then Ms. Bishara took steps to improve life for people close to home.

With several other teachers, she developed a project in which students researched social issues and then wrote papers and presented short talks on their topics. They cleaned up the shores of Indian Lake and held fund-raisers for various causes.

Pam Sacks can be reached at psacks@telegram.com

This story has been posted in the following forums: : Headlines; COS - Liberia; Reconciliation