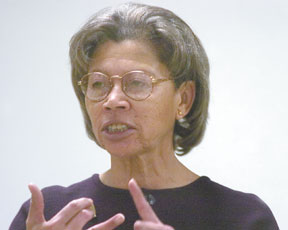 In a cross-country trip to visit a sister in Richmond, Va., prior to her leaving with the Peace Corps, Carter said she experienced not being able to use public restrooms because of her skin color. She also was refused service at a bar in Oklahoma because of her ethnicity. "Here I'm off to the Peace Corps to save the world for the U.S. and I can't even use a damn bathroom," she said.

At the age of 5, she dealt with the untimely death of her mother and subsequent move and separation from her father and three sisters.

She experienced segregation and later the desegregation of schools while growing up in San Antonio.

She tolerated mild discrimination in college, was one of the nation's first Peace Corps volunteers and was hired through the aggressive efforts of affirmative action.

She persisted through raising a son as a single parent, returning to college in her mid-40s to finish a doctoral degree and changing careers that have taken her from coast to coast.

But there is still one change that the political science professor hasn't yet realized, but hopes to do so before she ends her teaching career at CSU-Pueblo.

"One of the complaints that I have about CSU-Pueblo is that it is not a part of the Pueblo community," Carter, 64, said in a recent interview from her office. "We sit here on the hill not doing much for the community. That's one of the things that I want to rectify before I leave academia.

"I think I still have something that I can contribute through the university to help the community," she said. "What gives any meaning to my life is the extent in which I can give back."

Based on all that Carter has endured and accomplished during her life, that task may not be as far-fetched for her to realize as some may think.

Carter's tenacity, fiery spirit and go-get-'em attitude were evident early in life while growing up with a maternal uncle in a strict Catholic family in San Antonio.

"My mother had Irish in her so we grew up in strong Catholic family," said Carter, whose light skin-tone gives hint to her Irish ancestry.

Her uncle, who owned a machine shop, enrolled her in an all-black Catholic school, where Carter said she frequently ended up in the principal's office for fighting.

"The socioeconomics were so varied and, as a result, there were some pretty rough kids there that I ended up getting into a lot of fights."

After the 1954 Supreme Court ruling of Brown v. The (Topeka, Kan.) Board of Education, which led to the end of segregation in schools, Carter, then a fifth-grader, transferred to a previously segregated girls’ Catholic school. She later graduated in 1959 from a co-ed Catholic high school.

Carter said she experienced few race-related problems at either of the previously segregated schools.

"San Antonio was not the Deep South and it had a very different racial environment," she said. "Everything was segregated, but the level of hostility was low. I don't remember growing up seeing or hearing about any violent racial acts in San Antonio."

Carter said there were mild incidents of racial discrimination at school.

"It didn't bother us because we had our own social life outside of high school," she said.

After high school, Carter attended a junior college in San Antonio, then Prairie View A&M University, a historically black university. She earned a degree in sociology at Incarnate Word College.

It was at Incarnate Word that Carter said she "blossomed intellectually."

"That was when I first identified with the intellectual world," she said. "It was an all-girls school, so we didn't have the distractions of boys. During our breaks, we would sit around and discuss philosophies and theories." Carter graduated with a sociology degree.

Carter said after graduation, she volunteered for the Peace Corps after seeing President John Kennedy during a visit to San Antonio.

"I was a Kennedy kid and I thought, ‘I'm going to go out and save the world,’ ” she said of joining the Peace Corps.

Despite the sacrifice she made on behalf of her country, Carter said segregation still reared its ugly head.

In a cross-country trip to visit a sister in Richmond, Va., prior to her leaving with the Peace Corps, Carter said she experienced not being able to use public restrooms because of her skin color. She also was refused service at a bar in Oklahoma because of her ethnicity.

"Here I'm off to the Peace Corps to save the world for the U.S. and I can't even use a damn bathroom," she said.

After returning from a two-year stint in Costa Rica, Carter earned a master's degree from Catholic University and had her only child. She returned to school to begin a doctoral program and eventually landed a teaching job at the University of Washington.

But just prior to her being eligible for tenure, Carter was let go because she had not been published.

Carter said she was among several black professors that had been hired through the aggressive efforts of affirmative action, then placed on various committees as the 'token blacks’, only to later be denied tenure.

"We started dropping like flies," Carter said of her black colleagues. "We were so busy serving on the committees that we didn't have time to publish."

Carter left academia and went to work for the city of Seattle in the planning department. She eventually returned to school to earn a doctoral degree in political science.

"I had become more and more concerned with local development and political empowerment and that's what made me decide to go into political science."

Carter returned to teaching at Duke University and later was hired at CSU-Pueblo, where she plans to end her professional career.

"I like teaching and I like Pueblo. This is where I want to be at this point in my life," she said. "There's still some things that I would like to accomplish here. One of the reasons I came back into academia and political science is that I am committed to changing the world we work in. As a discipline, we don't do that and that's why I believe we have to get out and actively get involved in order to make a difference. I'm committed to doing that."

This story has been posted in the following forums: : Headlines; COS - Costa Rica; Segregation; African American Issues; Minority RPCVs