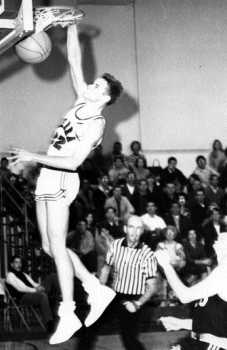 Whether as a standout player at Roseville High School, Sierra College and Linfield College in Oregon; or as a teacher of the game as a member of the Peace Corps in Morocco and coach at Oakmont High School; or as a weekend warrior in recreation leagues around Placer County, Donnell did it with passion.

Caption: As a basketball player for Sierra College, Gary Donnell always seemed to have the right stuff. Photo: Special to THE PRESS-TRIBUNE

Feb. 16--Anyone who has battled for position or tried to match X's and O's with Gary Donnell knows the true meaning of intensity and focus on the basketball court.

Whether as a standout player at Roseville High School, Sierra College and Linfield College in Oregon; or as a teacher of the game as a member of the Peace Corps in Morocco and coach at Oakmont High School; or as a weekend warrior in recreation leagues around Placer County, Donnell did it with passion.

Donnell was impressed with the turnout of about 250 for the luncheon in which his son, Chris Donnell, talked about his proud father.

"They did a really nice job," Donnell said of the event. "I can't say enough about John Volek. He's really trying to get people to reconnect with the college."

Donnell admits to having a particularly fond place in his heart for the Rocklin college. His three sisters and two brothers also attended the school, and it's where he developed into an outstanding basketball player.

The two-year performance earned Donnell a scholarship to Gonzaga, though he opted to compete instead for coach Ted Wilson at tiny Linfield College, an NAIA school in McMinnville, Ore., that played a full-throttle, up-tempo style uncommon at the time.

Donnell said Linfield, in compiling 24-4 and 23-6 records during his two years at the school, often would score 90 points or more a game.

"We played wall-to-wall pressure and ran every time we got the ball," Donnell said. "He liked to have a lot of guys in double figures. So when you got to 10 points, you had to watch out, because (Goto would) pull you out."

Wilson helped get Donnell a one-week rookie-camp tryout with the Portland Trail Blazers in 1970, where he shared court time with top draft pick Geoff Petrie, now the Sacramento Kings president of basketball operations.

But Donnell knew making an NBA roster was a long shot. He helped coach at Linfield while he completed his graduation requirements and then with his bride, Candi, took a two-year mission to Morocco. Donnell helped coach the junior and senior national teams while enjoying the exotic locale along the Atlantic coast.

"It was the best thing in the world to be there together," Donnell said. "It cemented our relationship. It was an eye-opener as far as being in a different culture. ... Everyone was very, very good to us."

Returning to the United States, Donnell spent three years as an off-campus head coach at Sierra College, then later served as an assistant to John Rankin.

But Donnell's reputation as one of the area's top coaches developed at Oakmont, where he coached for 14 seasons. While he had many good teams, his favorite was the 1993-94 unit that went 30-4 and lost to East Bakersfield in the Division II state championship in Oakland.

He said the team that included Whitney Brake, Chad Littler, Anthony Flood and his point-guard son, Chris, had an insatiable work ethic.

"We had a stable of guards and forwards that were athletic and bright and shared the same values," Donnell said. "Good kids and good athletes make you a good coach."

Donnell, who stepped down at the end of the 2000-01 season, still teaches physical education and coaches the boys and girls golf teams at Oakmont. But he has no desire to coach basketball again.

"No way," he said. "I'm in a different chapter in my life. To try to do something well, you have to work hard at it, and you can only sustain it so long."

This story has been posted in the following forums: : Headlines; COS - Morocco; Sports; Basketball