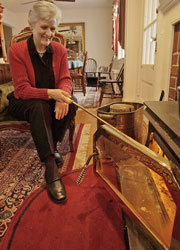 Clute graduated from college in 1965, served in the Peace Corps, married fellow Peace Corps volunteer Eric Johnson in 1967 and got her first master's degree in public administration in 1968. She entered law school with a 2-month-old child. That was 1970.

Lawyer Sylvia Clute, 62, rose in the wave's trough instead of on its crest.

"The first time I became aware of [gender disparity] was when I was in high school," Clute recalled. "I wanted to be an architect but the school counselor said I couldn't because I was a woman." That was 1960.

Her mother steered her toward teaching or nursing, both traditional women's careers.

Then, in Clute's sophomore year at a western Catholic college -- "they had more rules there than I ever imagined possible" -- her mother astonished her daughter by urging her to travel alone to study in Paris.

"It was a formative experience," Clute said. She watched President Charles de Gaulle be "a leader telling his people what they didn't want to hear:" that "France must be economically entwined with the rest of Europe and with Germans." His example of leadership and vision of unity influenced her life.

Clute graduated from college in 1965, served in the Peace Corps, married fellow Peace Corps volunteer Eric Johnson in 1967 and got her first master's degree in public administration in 1968. She entered law school with a 2-month-old child. That was 1970.

There were still quotas on the numbers of women and minorities admitted. Quotas were banned two years later -- in time to benefit women like Susan Miller.

Clute was pregnant with her second child when she graduated from law school in 1973 and moved to Richmond. She opened a legal practice in 1975 when her third and final child was 5 months old.

"This was before child care was available," she said.

She also then began organizing what became The Women's Bank, a Richmond bank specializing in services for business and professional women. It opened in 1977 and sold for a profit a decade later and merged into other banks. She fought for passage of the Equal Rights Amendment, which failed to pass, and for expanded divorce and sexual abuse laws.

In 1994, she sought the U.S. Senate Democratic primary nomination won by then-Sen. Charles S. Robb, and in 2001 sought, but lost, the Democratic nomination for attorney general.

She never burned bras to protest discrimination against women.

"I was never comfortable with hard-edge feminism. I do believe that they cut the waves for those in our business suits to do our thing. Cutting-edge, abrasive people move solidness to begin to change."

Clute has written a sequel to her 1997 book, "Destiny." The new book, to be published this summer, is called "Destiny Unveiled." She's now writing a guide to help people discuss its subject, restorative justice.

She wants to move the legal system's increasingly brutal "vengence model of justice" toward "restorative justice," which heals victims by having their losses acknowledged and lets offenders acknowledge the harm they've done and to make reparations.

This story has been posted in the following forums: : Headlines; COS - Nepal; Women's Issues