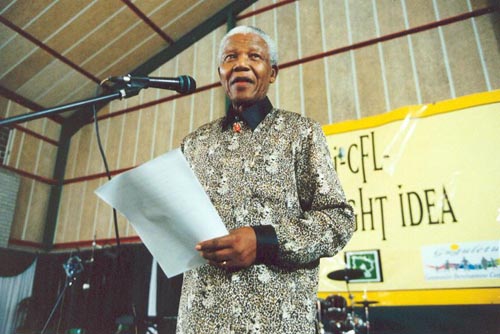 JOHANNESBURG (Reuters) - South Africa's Nelson Mandela, one of Africa's most committed campaigners in the battle against AIDS, announced that his only surviving son had succumbed to the disease on Thursday.

Makgatho Mandela, 54, died in a Johannesburg clinic where he had been receiving treatment for more than a month. His wife Zondi died in 2003 from pneumonia.

"I announce that my son has died of AIDS," the 86-year-old Nobel Peace laureate told a news conference, urging a redoubled fight against the disease.

"Let us give publicity to HIV/AIDS and not hide it, because the only way to make it appear like a normal illness like TB, like cancer, is always to come out and to say somebody has died because of HIV/AIDS. And people will stop regarding it as something extraordinary," said a frail-looking Mandela, surrounded by his grandchildren and other family members.

Mandela's announcement of his personal AIDS tragedy challenged the widespread taboo which keeps many Africans from discussing an epidemic which now infects more than 25 million people across the continent.

In South Africa, which with some five million HIV/AIDS infections has the highest AIDS caseload in the world, the disease kills more than 600 people each day, activists say.

Despite the mounting death toll, few public figures in South Africa or other African countries have personally come forward to say that AIDS has affected them or their families.

Deaths from the disease are usually attributed to a "long illness," pneumonia, or other secondary causes.

Veteran opposition leader Mangosuthu Buthelezi of the Inkatha Freedom Party helped to break the silence last year when he announced that two of his children had died from AIDS-related causes.

Mandela lost his first son, Madiba Thembekile, in a car crash in 1969 while Mandela was still in prison for his efforts to end white rule in South Africa. The apartheid government denied him permission to attend that funeral.

Mandela, who looks increasingly frail in his public appearances, has suffered a string of personal losses over the last several years. He buried Makgatho's mother, his first wife Evelyn Mase, in 2004 and attended the funeral for Makgatho's wife Zondi following her death.

In 2003, Mandela led South Africa in mourning for his African National Congress comrade Walter Sisulu, whose death at age 90 left Mandela almost alone among the elder generation of leaders who helped end apartheid and bring multi-racial democracy to South Africa in 1994.

Mandela had canceled several holiday engagements over the past month to remain close to his ailing son. He has several daughters from his marriages including two from his second wife Winnie Madikizela-Mandela.

Mandela officially retired from public life last year, but has nevertheless kept up a busy schedule promoting his various causes -- chief among them fight against South Africa's devastating AIDS epidemic.

Makgatho Mandela was a lawyer with a background in insurance who kept a relatively low profile. He had been married twice and had three sons, all of whom appeared with Mandela as he announced the cause of their father's death.

This story has been posted in the following forums: : Headlines; COS - South Africa; AIDS; HIV; AIDS Education