Jose Ravano on Wednesday tours the Brother's Brother Foundation office on the North Side. He will coordinate the relief efforts for CARE in Sri Lanka, devastated by the Dec. 26 earthquake and tsunami.
Sidney L. Davis/Tribune-Review

Shortly before most of the world knew about the rampaging walls of water that killed more than 140,000 people on Dec. 26, the phone rang in Jose Ravano's Washington, D.C., home.

Ravano picked up the receiver and heard his hysterical wife, Irene Fraser, trying to explain what had just happened to her half a world away. All she could say was that the Sri Lankan lagoon she lived on suddenly exploded, dragged her out to sea and violently tossed her battered body back on shore.

Even more terrifying, Fraser, a relief worker like her husband, didn't know whether it was about to happen again. So she told her husband that she loved him, just in case. 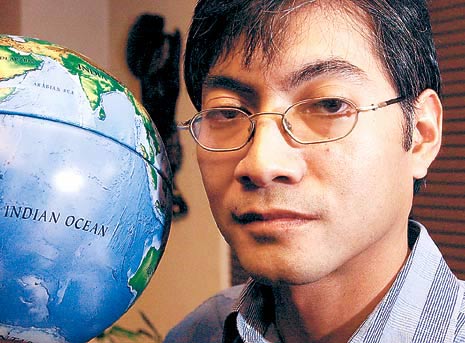 Today, Plum native Ravano, 38, will leave for Sri Lanka to lead the recovery effort for the international relief agency CARE International, and to see his wife, who, a day after getting trounced by a tsunami, went back to work. They will be on opposite ends of the country, which is about the size of West Virginia. He'll be based in the capital of Colombo, on the country's east coast, while his wife will continue running the relief operation for Save the Children in the west coast province of Ampara.

One of Ravano's primary duties, after getting water and sanitation facilities running, will be to organize the international relief effort, eliminating duplication with other agencies and making sure that there is a plan for the years-long task of rebuilding.

Ravano, a slim, bespectacled, soft-spoken man, left Pittsburgh to attend college at the University of Notre Dame. He became interested in humanitarian work while completing master's degrees in public health and international relations at Johns Hopkins University. After graduation, he joined the Peace Corps, kicking off a career of helping people who are at their most helpless.

His work with various relief organizations has taken him to, among other places, Thailand, Burma and Kosovo. Whenever a crisis strikes and Ravano prepares to swoop in, his father, Dr. Jose Ravano, of Plum, sometimes wishes he'd just stay home.

"Of course I worry," Dr. Ravano said, recalling the time his son came back from Asia with a parasitic worm under his skin. But his son is a grown man and has made up his mind, so Dr. Ravano, a native of the Philippines who moved to Plum in 1962, can only shrug and hope for the best.

The elder Ravano knows what it feels like to want to help -- the retired physician works two days a week, for four hours a day, at the federal building, Downtown, screening applicants for the military. He tells jokes to lighten the mood, he said. "The kids like it."

"I knew I was going to get a call" from CARE once it was known that a tsunami had hit, said the younger Ravano. He worked for CARE in Sri Lanka for more than three years, from 2000 to 2003, setting up relief camps for refugees of the war between the government and Tamil separatists in the north. He married his Scottish wife in Sri Lanka in 2001.

"It's a wonderfully beautiful country," Ravano said of the island nation. On a map it looks like a tear dripping from the tip of the Indian subcontinent. Scenic beaches ring the island and tea plantations cover the central countryside, he said.

It's so wonderful, in fact, that Ravano said he feels some trepidation about going back there now that it's been torn apart. More than 30,000 of the country's 19.9 million people died. Between 788,000 and 1.5 million are homeless -- it's tough to put an exact figure on it because no one knows how many people live in the northern part of the country controlled by separatists, he said.

"I can handle the work. It's seeing something you love in a different form, I guess," Ravano said yesterday during a visit to the Brother's Brother Foundation office on the North Side.

Dr. Ravano serves on the foundation's board of directors, and the foundation president asked him to bring his son by so they could lay the groundwork for some sort of cooperative effort during the four months that Ravano is scheduled to be in Sri Lanka.

"I wish I could tell you what that (effort) will be," said Luke Hingson, president of Brother's Brother, which ships health care and education supplies to needy nations. There hasn't been time to coordinate a plan, Hingson said, in part because the organization has gotten 2,000 donations, averaging $150 apiece, from Pittsburghers since the tsunami. The foundation usually gets that many in a year.

But for a sudden increase in airfares a few weeks before, Ravano would likely have been in Sri Lanka when the tsunami ravaged the coast. He had planned to take a vacation with his parents, who live in Plum, and his brother, sister-in-law and niece, who live in Churchill, then travel to Sri Lanka to spend Christmas with his wife. When airline tickets turned out to be twice what they normally cost, he postponed the trip.

Ravano left CARE when he returned to the United States this summer to work for the Congressional Hunger Center, a Washington, D.C.-based relief agency. At night, he's attending law school at Georgetown University.

"We'll miss him, but we think he's doing the right thing," said Margaret Zeigler, deputy director of the Congressional Hunger Center. "We know he's going to be a great asset."

This story has been posted in the following forums: : Headlines; COS - Sri Lanka; Tsunami