Cayenne Smith spent a brief stint as a Peace Corps volunteer in Turkmenistan, which she cut short because of interference and harassment of her and her hosts by the local government 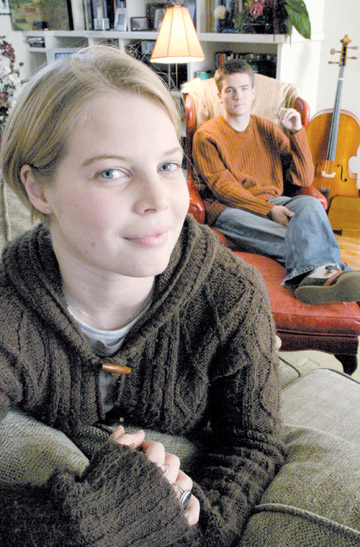 Cayenne Smith spent a brief stint as a Peace Corps volunteer in Turkmenistan, which she cut short because of interference and harassment of her and her hosts by the local government

01.14.05 - At midnight tonight, Cayenne Smith will begin a 44-hour trip from the San Francisco airport to a tsunami refugee camp in Kalmunai, a small township on the eastern coast of Sri Lanka.

Smith will stop at Taipei, Hong Kong and Bangkok before reaching Colombo, the capital of Sri Lanka. She will take with her a spare pair of jeans, three T-shirts, her own first-aid supplies, such as antibiotics, and several bags of donated medical supplies for the tsunami refugees. She has paid her own airfare and will pay for her own food and expenses while living in refugee-camp-style accommodations.

And if a group of determined Sonoma Valley residents has its way, Smith will also take with her a sort of conduit of financial aid to meet the needs of the people of Kalmunai for the next two years.

"This is just in Cayenne's nature to do this. To have an opportunity to help her out is wonderful," said Sonoma City Planner David Goodison, one of several people working to create ongoing support from Sonoma to Sri Lanka.

Smith, who grew up in the Valley, has signed on for six months as a volunteer with Service Civil International, a worldwide voluntary service organization that brings volunteers of different backgrounds and cultures together to work on pressing social needs. She will be part of an eight-member team chosen out of about 50 volunteer applicants.

This is far from her first major volunteer effort. The daughter of City Prosecutor Bob Smith and Vicki Smith, Cayenne Smith attended Sonoma Valley schools before earning a bachelor's degree in cultural anthropology at San Francisco State. She spent a brief stint as a Peace Corps volunteer in Turkmenistan, which she cut short because of interference and harassment of her and her hosts by the local government.

Undeterred, she went on to volunteer in a refugee camp in Kosovo, in the former Yugoslavia.

"It's work that I love to do," she said, adding that her time in the Kosovo refugee camp "was the single greatest experience in my life as well as the most horrific."

"Working in a refugee camp is overwhelming. ... (But) even though you go home at night and cry, each morning you go back."

Returning home to Sonoma from Kosovo, she spent a few months working with her father to revamp the city's Youth and Family Services program.

Then she submitted her résumé to Volunteers for Peace, which recruits people for various social projects worldwide, and landed the Sri Lanka assignment.

Asked why she is so dedicated to her volunteer work, Smith cited her parents "who have taught me everything I know about compassion," locals Diana and Roger Rhoten, "who taught me that it's all right to be afraid, but you can get through it; you can get through anything," and her fifth-grade teacher, Jim Tonery, who she said opened her eyes to the fact that this is a huge world and we are not alone in it.

"He really taught us that we're not by ourselves and that we should help everyone else," Smith said of Tonery.

Her dad, Bob Smith, said he wasn't at all surprised when she told him she would be volunteering in Sri Lanka.

"It's just in her nature," he said. "It was the teachers at Flowery school. It was being with Diana and Roger Rhoten. I think all of these things influenced the kind of person she became. I attribute it to the Sonoma environment."

Bob and Vicki Smith are working with a number of Valley residents - Al and Kathy Mazza, Larry and Rose Murphy, and others - to set up the nonprofit Sonoma Tsunami organization, with a special bank account at Sonoma Valley Bank.

The goal is make funds available to Cayenne Smith and the team she will be working with in Sri Lanka, so that the money can be used to help the refugee community. Smith will e-mail monthly reports home to Sonoma, detailing what has been accomplished.

"The money will go directly from our community to a community that needs it," said Kathy Mazza. "No overhead, no minimum. Cayenne will be there with the people who need the help and will be able to access their needs directly."

For instance, according to an e-mail from those Cayenne will be working with, they have wells and three pumps, but none of the pumps is strong enough to bring up the water. They need a 4-inch pump with a six-horsepower engine. The money to buy that pump is the sort of support that Sonoma Tsunami will provide.

"This is a chance for our community, Sonoma, to really help another small community and know where its money is going. ... I think it's just a personal way to contribute," Cayenne Smith said.

Although one-time donations will be gratefully accepted, those forming Sonoma Tsunami hope people will commit to contributing $25 a month for two years, so that the support is ongoing and doesn't stop after media attention has drifted elsewhere.

"This is a sustainable project, which is the key to rebuilding Sri Lanka and other communities," Smith said.

Donations have already been received for Smith to take with her when she departs at midnight tonight. Among her bags of first-aid supplies are two full boxes purchased by Girl Scout Troop 413. In a project spearheaded by Girl Scout Emily Milward, the troop members donated the money they raised by recycling Christmas trees - money they usually use for their own field trips.

"This isn't just me and my project," Smith said. "This is a huge effort, and I could never have done it myself. ... The heroes in Sonoma are amazing and numerous."

Those who are willing to make the commitment of $25 monthly for two years should send their contact information - name, phone number(s), mailing address and e-mail address or fax if available - to rmurphy@vom.com or Sonoma Tsunami, c/o Bob Smith, P.O. Box 1463, Sonoma, CA 95476. One-time donations can also be sent to that address.

This story has been posted in the following forums: : Headlines; COS - Turkmenistan; Tsunami