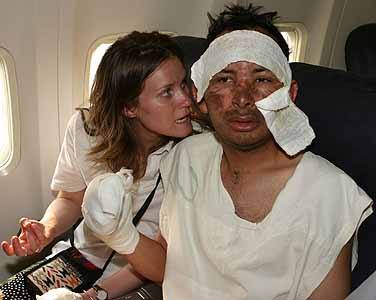 The couple met in a church choir in Arequipa, Peru's second-largest city. Glenn, a graduate of University High School, had served with the Peace Corps in China before going to Peru to teach English.

By AMY TAXIN and JOHN McDONALD
The Orange County Register

They were on the way to a jungle honeymoon in Peru when the flight attendant announced that there might be rough patches right before landing.

Former Irvine resident Monica Glenn, 27, was chatting with her new husband, William Zea-Palacios, 30. The couple had gotten married in an elaborate church ceremony Saturday night in Arequipa, Peru, where they both live.

It was raining hard. Suddenly the plane began to shake.

"As the turbulence increased, I knew something was wrong," Glenn said Wednesday night in a telephone interview with The Orange County Register from a hospital in Lima.

"I remember turning to William and I told him: 'This is not right. Something is wrong,' " she said. "Within seconds, the plane was hitting the trees and crashed."

Fifty-eight passengers and crew escaped the burning wreckage of TANS Peru's Flight 204, which split in two after an emergency landing during a hailstorm. At least 37 people were killed in the crash and three more were missing Wednesday.

Zea, a paramedic, jumped ahead to protect his wife from the flames that leapt at them from the front of the plane. The couple pushed toward the back to escape the fire amid screaming survivors.

People dragged themselves from the wreckage and pushed through swamp-like mud in the storm.

"Everything was calm and then from one minute to the next, there was turbulence and the plane fell," said Zea, who is recovering from second-degree burns to his hands and face. "All I could do was protect my wife so she wouldn't get burned."

The couple met in a church choir in Arequipa, Peru's second-largest city. Glenn, a graduate of University High School, had served with the Peace Corps in China before going to Peru to teach English, said Marilyn Reilly of Irvine, a longtime friend of the Glenn family who attended the all-night wedding celebration Saturday.

The couple had planned a four-day jungle tour from Iquitos, a city near Peru's northern border. They took a bus to Lima and boarded a flight that would first go to Pucallpa, another jungle city.

Wind shear is a potentially dangerous sudden change in wind speed or direction, often during a thunderstorm.

The pilot tried landing on a marsh to soften the impact but the 22-year-old aircraft broke apart.

Glenn recalled leaving the plane as heavy rain and hail pounded the field. She could see flames in the tops of the trees. A few minutes later, the plane exploded.

"We were probably about 50 yards from the plane when there was a second explosion," she said. "That's really what destroyed the aircraft."

Television images showed bodies being retrieved from the marsh. The fuselage was shattered with pieces strewn along a 1,640-foot path.

Glenn said about 20 survivors moved to a clearing in the jungle brush, hoping rescuers would find them. They tried to stay calm. It took about 40 minutes for rescuers to arrive. They took the most seriously wounded first, she said.

After spending the night at a Pucallpa hospital, Glenn and Zea traveled to Lima on Wednesday for medical treatment. She was uneasy about traveling by plane, haunted by memories of the crash.

They were taken to Lima in a presidential plane by Peruvian First Lady Eliane Karp.

Glenn has second-degree burns on one of her hands. Her husband's wounds are more serious, but he will recover.

"You never know what is going to happen. You have to be grateful for each day, for each other," she said, preparing for burn treatments the two will undergo Thursday.

"I'm a strong believer in the wedding vows – remain faithful till death do you part, for better or for worse, in sickness or in health. And I think in one way or another, this is our first test, and we're just trying to take it moment by moment."

Glenn's family and some friends from Orange County had gone to the wedding in Arequipa.

"It was an elegant wedding – very formal, long gowns, tuxedos, a choir and a five-piece orchestra," Reilly said. "The party went on until 6 a.m."

Glenn's parents traveled to the jungle for a similar tour earlier Tuesday and were not on the plane that crashed.

Glenn was pleased that her husband was transferred from Pucallpa to Lima, where he can get better medical care and there is no shortage of medical supplies. She hopes in a few days they can go home to Arequipa.

She recalled the passengers she saw during the crash: a man who was so severely burned from the fire in the front of the plane that he could barely walk; a little girl who appeared to have survived on her own after pushing through the rubble.

And those who didn't make it.

"When I compare myself to all these other people who have been so severely injured, I really consider myself lucky," she said. "I really pray for the families who have lost their loved ones."
Register staff writer Sonya Smith and The Associated Press contributed to this report.

This story has been posted in the following forums: : Headlines; COS - China; COS - Peru; Accidents