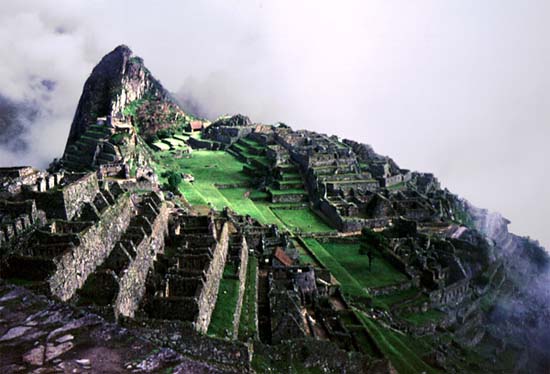 My hosts took great pride in offering me the front of the guinea pig. The first time, I played with the guinea pig quite a bit. As the others watched to see whether I would eat it or not, I swallowed as much as I could.

Bowlfuls of borsch
Food Lore From The Peace Corps: Adventurous eating is part of the job for volunteers in far corners of the world

As Peace Corps celebrates its 45th anniversary this week, some local volunteers share their experiences and recipes:

Hiding the brains of a guinea pig

In most of the Andean villages, the only real protein was guinea pig, or "cuy" as they say in the Quechua language. Each little hut had a place set aside in the corner for the guinea pigs. For every guest of honor, the host kills a cuy.

I had no idea this was going to happen the first time I was a guest in someone's home. My host killed the pig, gutted it, and put it on a skewer right in front of me.

I watched for 15 or 20 minutes as the cuy was rotisseried on a wood stove in the middle of the hut. When it was done and dinner was served, I was given the front end of the guinea pig. The guest of honor would always get the head, where the brains are, since the Campesinos believed that the brains will help you become even brighter than you already are.

My hosts took great pride in offering me the front of the guinea pig. The first time, I played with the guinea pig quite a bit. As the others watched to see whether I would eat it or not, I swallowed as much as I could.

The second time, I had a little windbreaker with a zipper in the front. When I didn't think anyone was looking, I threw the brains into the windbreaker, and when I left I chucked it outside. I wasn't sure if anyone realized what I'd done.

We went back in 1990 to the house where I was a guest of honor. The matriarch was still there, with her family. I related the story and she got such a kick out of it. I can't say I'm any brighter because I ate the brains of the guinea pig.

The Thompsons are retired Eugene educators who own and manage Fox Hollow Farm and Fiber. 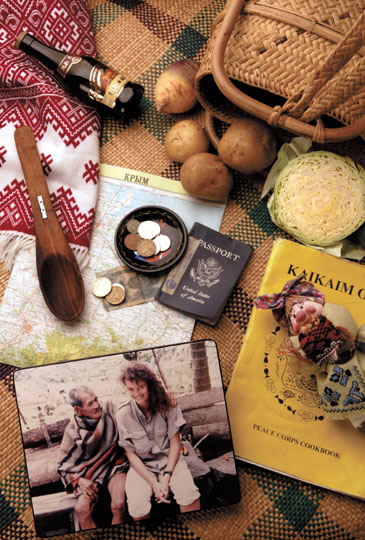 Peace Corps volunteers including Maggie Keenan (shown in photo at lower left taken while she was in the Philippines) learn much about an area's culture through the sharing of food. Photo: Paul Carter
The Register-Guard

From Wayne and Rolly

In a bowl, combine the lemon juice, cayenne pepper and salt and pepper to taste. Add the onion, separated into rings and set aside to pickle at room temperature. Boil the potatoes in their skins until tender. Drain, peel, and keep warm. In a blender or food processor combine the cheese, hot peppers, palillo or turmeric, and the cream. Blend until smooth. Heat the oil in a skillet, pour in the cheese mixture, reduce the heat to low, and cook, stirring constantly with a wooden spoon, until the sauce is smooth and creamy.

This story has been posted in the following forums: : Headlines; COS - Peru; Food