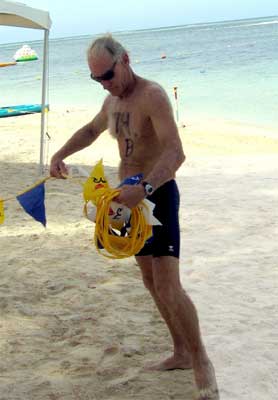 The Kan Pacific Swimming Pool was not even on the drawing board, the revival of the Micronesian Games was just a dream, and the medals and trophies won by the SSC were years away when Bill and Jean decided to make Saipan their home in 1973.

Caption: Sports Hall of Fame inductee and longtime Saipan resident Bill Sakovich will once again patrol the shores of Saipan, as he would help in the staging of the 2006 XTERRA Saipan Championships and 17th Tagaman Triathlon early next month. (Photo by Mark Rabago)

Sports as we know it is never going to be the same again once Bill and Jean Sakovich finally move to Hawaii at the end of this month.

For the better part of the past 30 years, the Sakoviches have had their hands in almost all sports activities that have come down in the Commonwealth.

Tomorrow afternoon Jean will board a plane and fly to her old hometown, while Bill will stay until the end of the month and tie lose ends, most notably breaking in the new coach for the Saipan Swim Club.

The Kan Pacific Swimming Pool was not even on the drawing board, the revival of the Micronesian Games was just a dream, and the medals and trophies won by the SSC were years away when Bill and Jean decided to make Saipan their home in 1973.

"At first we figured we'd stay for two years. It was so much different then. For instance, there was nothing between Chalan Kanoa and Garapan - literally nothing. But we fell in love with the islands and stayed," said Jean.

Bill always loved the idea of going overseas and prior to his Bank of Hawaii assignment on Saipan he had been to Indonesia and Morocco as part of the Peace Corps.

"We came here with an open mind and we fit right in," said Bill.

At first, Bill and Jean got into sailing for recreation but after a few months got involved in other aquatic sports that eventually led them to establish the Saipan Swim Club in 1974.

It was the start of a sports program unequaled until today in the sheer number of medals, trophies, and accolades brought in from regional and even international events.

But to the Sakoviches the medals were always just great souvenirs, and constantly reminded their wards that it was not the winning that's really important but how you battled and if you've done your best.

"The sad part is if you go to any competition, people ask 'did you win a medal?' If you didn't win a medal then you're a failure. But that's not true, the important thing is how you competed and if you did your best time," said Bill.

The two also said that they get the most satisfaction in seeing the children they coached in swimming grow up to become solid citizens.

"The most rewarding is seeing the SSC kids achieve and go off to school and grow up. It's always nice to have all the medals and the recognition and all that stuff but the best reward was to know that someone like Mike Villagomez went to NCAA came back and is now doing a great job teaching. My son, Jon, is coaching, my daughter is also doing fine. Our other former swimmers are also doing great in their own right. That's the most rewarding and that's all we really wanted," Bill added.

Asked what part of Saipan they would miss once they relocate to Hilo, the couple supplied varied answers - from the people, to the sites, to the many activities they participated during the three-plus decades they lived on the island.

"I'm really going to miss my friends and just about everybody that worked with us. But I'm also going to miss the views - these lagoon views on this green little island are really breathtaking and will be hard to leave behind," said Jean.

She said among the sites she would probably miss the most is the northern part of Saipan. Jean said Marpi has always been a sort of refuge for her, a release area, and a church where she could kiss all the worries of the world goodbye.

Her husband shares the same sentiment.

But for Bill, he would be leaving the Commonwealth with one big regret-and that's being unable to steer the CNMI toward the Olympic movement.

And his frustration further multiplied when island nations he helped get into the movement-the Federated States of Micronesian and Palau-were later admitted to the Olympics ahead of the CNMI.

Although, Bill is more than happy with FSM and Palau's success he finds it ironic that he would be spending the next couple of years working as a consultant of the swimming programs of these countries with money he originally sought out for the CNMI's own swimming program.

"As we get farther behind, these islands are getting ahead because they get all the support from the Olympic organization."

Save for that disappointment, by and large, the Sakoviches would treasure the years they spent living on Saipan and will forever consider the Commonwealth their home.

In fact, going back to that kind of living weighed heavily on the minds of the Sakoviches when they were deciding where to relocate.

"There would always be trade-offs, obviously. We like the island living. We could've come back to Oahu, which is a big city like Guam. But we don't want that, that's why we're moving to Hilo, which is much like Saipan," he said.

They may be moving to Hawaii but for people of the CNMI, the Sakoviches would always remain residents of Saipan.

This story has been posted in the following forums: : Headlines; COS - Indonesia; COS - Morocco; Sports; Swimming