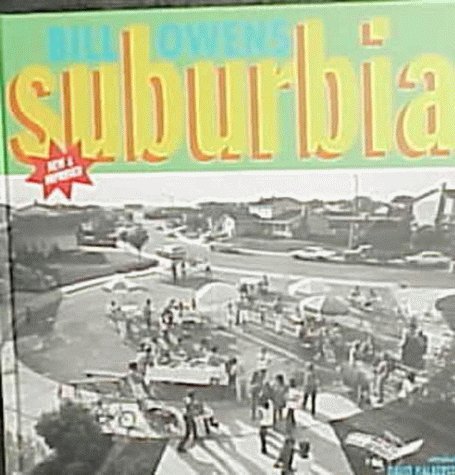 "When I was in the Peace Corps, a photographer came and photographed my wife Janet and I," Owens says looking out at his rambling backyard. "As soon as I saw what he was doing, I said 'I want to be a photojournalist.'" "I was 30," Owens says. "You go into total culture shock when you meet other young couples your age who already have a house and two cars and a swimming pool, and you don't. I was doing the Peace Corps, trying to save the world, going to college and traveling and everybody else was zooming right by me, trying to have what everybody in America has — cars and washing machines. You've got to have these material things and you have to have a job." Bill Owens jumped to fame as a photographer with the publication of his book Surburbia in 1972. Owens had taken up photography while working as a Peace Corps volunteer in Jamaica.

"We've already dug the hole for the pit," the renowned Hayward-based photographer and distiller says, motioning beyond the back porch serving as his alfresco summer bedroom to the future scene of his 70th birthday party. "We're doing it Hawaiian style."

But before the September bash, Owens has a schedule to tackle that would challenge someone half his age.

"My next trip I'll go to Salinas and visit a little distillery there making whiskey," he says. "Then I'm going to Burning Man for the first time. In September I'm (going to) Edinburgh. Then I have a book-signing in Venice and another
in New York." And then there's the "The Craft of Whiskey Distilling," an "on demand" book Owens is on the verge of publishing.

Whether hopping in his white Lexus for a cross-country journey, armed with a camera and a cardboard box full of clothes, or jetting across the globe to sign copies of his recently published monograph, the man responsible for capturing the look and feel of the American suburb is constantly on the move.

But this July morning, the silver-haired photographer was on his back porch, reminiscing about the past.

"When I was in the Peace Corps, a photographer came and photographed my wife Janet and I," Owens says looking out at his rambling backyard. "As soon as I saw what he was doing, I said 'I want to be a photojournalist.'"

He enrolled at San Francisco State and took courses in photography and visual anthropology. Soon the San Jose-born photographer was working at an East Bay daily paper, the Livermore Independent, in the middle of 1970s suburbia.

"I was 30," Owens says. "You go into total culture shock when you meet other young couples your age who already have a house and two cars and a swimming pool, and you don't. I was doing the Peace Corps, trying to save the world, going to college and traveling and everybody else was zooming right by me, trying to have what everybody in America has — cars and washing machines. You've got to have these material things and you have to have a job."

Owens' gig as a photojournalist introduced him to the denizens of suburbia: their social groups, work, private lives and leisure activities. He began to photograph them on weekends, writing down the stories that would later serve as photo captions and slowly developing a series of groundbreaking and iconic images like one of a wide-eyed couple spoon-feeding their wide-eyed baby while musing on the bounty of their suburban lifestyle. Those images have graced the walls of galleries and museums from San Jose to New York to Italy.

So what drew him to the suburbs?

"It's right in my backyard."

"He was the first one that I know of that really took his subjects and photographed them in a very documentary way but then added this very personal element with their own words being applied to the picture," says Des Moines Art Center curator Patricia Hickson, who in addition to co-curating The San Jose Museum of Art's "The Suburban Seventies: Photographs by Bill Owens" in 2000, found the artist's work strikingly familiar.

"I grew up in the suburbs of New England and (Bill's work) was very familiar territory to be sure" she says. "I grew up on a street that had kids who rode Big Wheels and dressed like cowboys and had air rifles, like a very iconic image of Bill's. I think his work really paved the way for those artists (working in a photojournalistic way) today."

Mark Petr, a former San Jose Museum of Art curator who initiated Owen's 2000 retrospective is quick to point out the sympathetic qualities in Owen's depictions of his subjects. "He humanized the subject," Petr says, suggesting that Owens is carrying on the legacy of Depression-era photographers such as Dorothea Lange who lived with their subjects and developed an understanding of their lives. "What he was trying to document was how these really good, everyday, ordinary people were incorporating or refusing to incorporate or dealing with all of the merging social values and loosening of hierarchies and social mores of the 1960s."

Owens continues that work today, although he professes no interest in recapturing the past with specific images of 21st century suburbia. Instead, he's making images that reflect larger American culture — its food and shopping centers and even its roadkill.

But that almost didn't happen.

"I put my photography away for 20 years to raise a family," Owens says. A brewer since his youth, he plunged into his other passion: handcrafted beer. He founded microbreweries including Buffalo Bill's Brewery in Hayward, published magazines and established the American Distilling Institute.

His photography career was reinvigorated a few years ago when he purchased a digital camera and began snapping away. And after accidentally discovering the record button on the side of his camera, he has become a filmmaker, creating quirky seconds- to minutes-long films that give sound and movement to the people and places he encounters.

When he's not working, Owens is busy being a grandfather and tending his garden, where he shows off his rainbow chard, beets, oregano, tomatoes and fava beans. He points out the exercise bike he's hoping to haul with him to Burning Man.

"I found this on the side of the road," he says, laughing. "I want to set up the bicycle so I can be bicycling at Burning Man but I'm just sitting there."

A detour into the antiques business left Owens with a collection of fascinating knickknacks strewed about his cottage and yard.

"Want to see all my crap in the basement?" he asks. "I've got all kinds of great stuff."

Reach Jennifer Modenessi at 925-977-8483 or jmodenessi@bayareanewsgroup.com.
# BIOGRAPHY NAME: Bill Owens
# AGE: 69
# RESIDENCE: Hayward
# OCCUPATION: Photographer, filmmaker and distiller
# CLAIM TO FAME: Published "Suburbia," a groundbreaking photo essay documenting the East Bay suburbs in 1972; "Our Kind of People"; "Working: I Do It For The Money"; and "Leisure."
# HONORS: Won National Endowment for the Arts grants in 1974 and 1977 through 1980 and Guggenheim Fellowships in 1976 and 1978; works collected by The Museum of Modern Art in New York, the Whitney Museum of American Art, the Metropolitan Museum of Art, the Bibliotheque Nationale de France and others.
# ON THE WEB: www.billowens.com. Visit ContraCosta
Times.com. for a multimedia slide show of Bill Owens by staff videographer Aric Crabb.


When this story was posted in August 2008, this was on the front page of PCOL:

This story has been posted in the following forums: : Headlines; Figures; COS - Jamaica; Photography