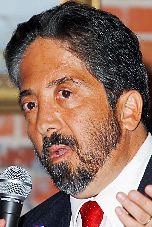 "As I marched to honor the life and works of the Rev. Dr. Martin Luther King Jr. and thought about the example of Rosa Parks' prophetic and nonviolent witness on the bus that fateful day in 1955 in Montgomery, Ala., I reflected more deeply on what this all means to us in 2006." John Kefalas was a candidate for Congress in 2004 and served as a Peace Corps Volunteer in El Salvador.

As I marched to honor the life and works of the Rev. Dr. Martin Luther King Jr. and thought about the example of Rosa Parks' prophetic and nonviolent witness on the bus that fateful day in 1955 in Montgomery, Ala., I reflected more deeply on what this all means to us in 2006.

King showed the world new ways for achieving justice, social change and equality. In public life, he was a Baptist minister, civil rights leader, nonviolent activist and peacemaker. His philosophy of nonviolent resistance led to his arrest several times, and he believed that civil disobedience in the face of unjust laws was appropriate. He understood that for the sake of conscience and in adherence to higher laws, nonviolent civil disobedience or moral obedience was an effective tool for change. This is his legacy.

King went through various transformations during his life, especially when he made the unmistakable connections between the Vietnam War and the abject poverty and stark injustices at home in America. But the most amazing thing about what he stood for was his deep commitment to the central values of democracy and freedom.

In 1965, after the Selma voting rights marchers were brutally repressed and after the Voting Rights Act was finally signed into law, King stated the following words before the Synagogue Council of America: "The stirring lesson of this age is that mass nonviolent direct action is not a peculiar device for Negro agitation. Rather, it is a historically validated method for defending freedom and democracy, and for enlarging these values for the benefit of the whole society." This is his legacy.

I offer these words to you because King is one of my heroes, and I am running for public office - Colorado House District 52. As a statement of conscience in opposition to our government's funding of wars, I have been known in the past for redirecting federal income and telephone excise taxes. Yes, I take risks for what is right, and I stand by these acts of moral obedience as an expression of my values and religious faith, which have prompted my involvement in other acts of moral obedience.

Yes, I have been arrested as a matter of principle and for nonviolent social change, especially when our government broke laws during the 1980s. I am proud of this history and continue to believe in the spirit, strength and action that King exemplifies.

We all agree that election campaigns should take the moral high ground and focus on issues that matter such as living wage jobs, quality and accessible education, universal health care, environmental protection, public safety and equality.

I am running for House District 52 in 2006 to fulfill my vision of a fair and sustainable economy that works for all and does not discriminate against anyone. I will serve the people of this community as an honest and accountable citizen legislator to make laws that are in the public interest and provide for the common good. My campaign is based on central democratic values such as fairness, compassion, equal opportunity, healthy families and a strong middle-class.

As a 30-year resident of Fort Collins who has raised his family here, I care about our community, and my entire adult life has been dedicated to creating positive change, empowering people and building community. In the spirit of the black Greensboro, N.C., college students who sat in at a segregated Woolworth's lunch counter on Feb. 1, 1960, thanks for listening.

John Kefalas, Fort Collins, is a Democratic candidate for District 52 in the Colorado House of Representatives.

This story has been posted in the following forums: : Headlines; COS - El Salvador; Politics; Election2006 - Kefalas