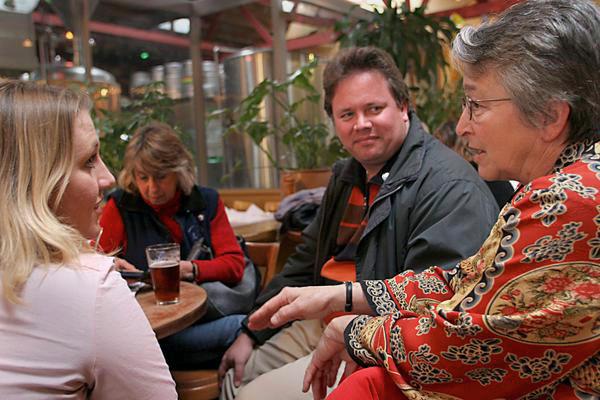 The hang-out on a recent Sunday - the first of many to come - was an informal observance of the 45th anniversary of the Peace Corps founding. Since 1961, when President John Kennedy challenged American youth to volunteer energy and expertise to Third World countries, more than 182,000 Americans of all ages have served in 138 countries.

Caption: Stephanie Giddings, Joan Lisetor, Erik Scheller and Faye D'Opal chat during a Peace Corps 'hangout' at Rafter's in San Rafael. All but Giddings are veterans of the Peace Corps, but Giddings plans to join soon. IJ photo/Alan Dep

The six ringed themselves in barstools around a single tall table and exchanged wistful tales of their years as Peace Corps volunteers - in India, Dominica, Guatemala, Ghana and Malaysia. The sixth person was a volunteer-to-be: Stephanie Giddings of Santa Clara, 27, who leaves next month for "somewhere in Eastern Europe or South America," she says - "one of about 31 countries."

Erik Scheller of Novato, who served in Ghana in 1991 through 1993, spoke for the others when he called his service "the toughest job you'll ever love," a phrase that has become a mantra among volunteers.

The hang-out on a recent Sunday - the first of many to come - was an informal observance of the 45th anniversary of the Peace Corps founding. Since 1961, when President John Kennedy challenged American youth to volunteer energy and expertise to Third World countries, more than 182,000 Americans of all ages have served in 138 countries.

A total of 7,810 volunteers are still at work overseas, according to Peace Corps records.

The five veterans said their years overseas were invaluable.

Assigned to administration - there were 600 volunteers in Malaysia at the time - and working on a variety of medical projects, she remembers the era from 1965 to 1968 as turbulent and enthralling. The Vietnam War was going on, and Malaysia became a relaxation destination for troops from all over the world, as well as Vietnamese refugees, and people fleeing President Sukarno's persecution of the Chinese in Indonesia.

Laatsch was recently divorced when she joined the Peace Corps "looking for meaning in my life." She was "very, very drawn to cultures of people different from myself. Differences do not scare me.

"And I thought the Peace Corps would help make the world more peaceful."

In the years since, Laatsch has continued to travel the world; she has worked with indigenous people in Bolivia and Senegal and with Navajo people in the American Southwest. After Malaysia, she earned a master's degree in visual anthropology and has taught at San Francisco State University, the Art Institute of San Francisco and in the San Francisco School District.

Dwayne Hunn of Mill Valley said he grew up in a lower-middle-class family, and the Peace Corps was his only chance to live and work overseas. He spent two challenging years, from 1967 to 1969, in Bombay, India, working with 39 other volunteers on community revitalization projects and living in a closet-sized room with a john "wall-papered" in cockroaches.

In the Peace Corps, "they dropped you into a slum and you were supposed to come up with projects on your own." Although some projects failed, "I got to start the first urban garden, which was a roaring success. The first crop was stolen, but the watchman in charge built a fence and maintained the garden and the food was shared with pregnant women who came to a neighborhood building during the day. That was the idea - you were supposed to start something, then get out of the way."

The experience certainly changed him: He has become an ardent promoter of a World Service Corps that - should the proposal pass Congress - would enlist thousands of additional Americans to serve in the Peace Corps, AmeriCorps, Habitat for Humanity, Head Start, Doctors Without Borders, Red Cross, Oxfam and other humanitarian organizations.

Meanwhile, he works in Marin as a consultant in land development, affordable housing and political campaigns.

Joan Lisetor, last year's president of the Northern California Peace Corps Association, joined in 1985 and went to Dominica in the eastern Caribbean.

The former IJ reporter was working as manager of media relations for the State Bar when she got the call. "I had filled out all the papers on a lark a few months before." She was hesitant, but "someone used the word 'adventure,' so I decided to go."

In Dominica, she served as program officer for the Bureau of Women's Affairs. On the side, she trained journalists, including personnel for the country's first local television program. She supervised commercials and documentaries "and thought when I came home I would continue to do the same thing." She now works as a consultant in media relations.

"Working in another culture gives you a different feeling about yourself, your life, the world," she said. "I had always been an independent person, but I was even more independent after that."

Scheller became a volunteer right out of college. "I didn't want to start the 8-to-5 right away. I wanted a totally different experience." Born in Turkey and raised in Germany, he graduated from Cal Poly as a civil engineer, and used his skills to work on sanitation and water supply projects in rural Ghana.

Among other things, he and his group built wells, lavatories and pit latrines, some of which still exist.

He revisited Ghana in January, meeting up with old friends, including one of his students whom he helped go to college in England.

"The cultural thing wasn't a big deal for me," according to Scheller, who had lived abroad and traveled extensively. "But I learned not to have fear, speaking in front of a number of people. And I learned to put myself in other people's shoes a lot better."

Scheller now heads his own international drafting and design firm, IDES, and is an engineering consultant to other firms.

A late-comer to the hang-out was Marin Superior Court Judge Faye D'Opal of Greenbrae. She worked with the Peace Corps for almost 10 years, beginning in Colombia as a rural volunteer, then moving on to administrative positions there and in other parts of Latin America. She married another volunteer and moved to Brazil where her first daughter was born.

D'Opal joined in 1963, a year after graduating from Hendrix College in Arkansas and moving to New York City to become a writer. "The idea of working in a small community in another country appealed to me," she says. "In Arkansas, community and connections were an important part of daily life."

She worked on community development and public health projects in a rural village of 7,000. The next year she moved into regional administration, helping design developmental projects with Colombian officials.

Later , D'Opal served on the staff of Peace Corps-Latin America in Washington, D.C., then became assistant director in Costa Rica and program training chief for Colombia, Venezuela and Central America.

She returned to the United States in 1973 and became a management training consultant in the burgeoning co-op movement. After moving to Marin, she worked for a school in Mill Valley before entering law school and starting her legal career.

D'Opal says she can't imagine a more rewarding experience than Peace Corps service. "The personal transformation, the purposefulness, the privilege of working with the people of another country make it a powerful experience."

Like others who served, "I felt tremendous joy and satisfaction, being part of a process of change and opportunity."

Giddings, the volunteer-to-be, said she had signed up as a break between getting her license as a marriage and family therapist and going to work full time.

Was she worried about going so far from home?

Hangouts, a Peace Corps tradition, are scheduled for the second Sunday of every month at 4 p.m. at Rafter's in San Rafael. The next will be April 9.

This story has been posted in the following forums: : Headlines; RPCV Community; Local Groups