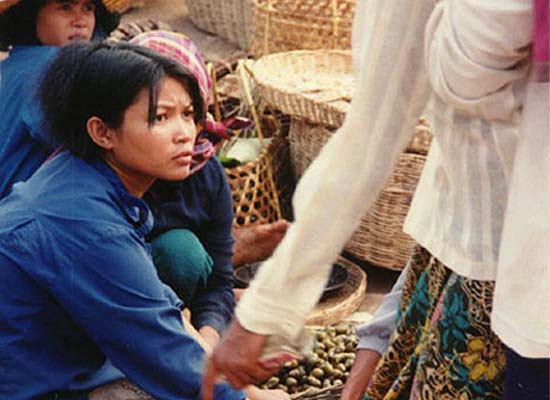 Despite the recent progress, the Cambodian economy continues to suffer from the effects of decades of civil war and internal strife. The per capita income is rapidly increasing, but is low compared with other countries in the region. Most rural households depend on agriculture and its related sub-sectors. The population lacks education and productive skills, particularly in the poverty-ridden countryside, which suffers from an almost total lack of basic infrastructure. Fear of renewed political instability and corruption within the government discourage foreign investment and delay foreign aid. The government is addressing these issues with assistance from bilateral and multilateral donors.

Cambodia underwent turbulent events from the 1970s until the early 1990s, when elections, administered by the United Nations, were held. Ever since then, Cambodia has enjoyed greater stability and peace. One effect of this was the smooth transition when King Sihanouk abdicated in favor of his son Norodom Sihamoni on October 14, 2004.

Cambodia is now a constitutional monarchy where executive power is held by the prime minister. The head of the state is the king, who reigns but does not govern. Although in the Khmer language there are many words meaning "king", the word officially used in Khmer (as found in the 1993 Cambodian Constitution) is preahmâhaksat (Khmer regular script), which literally means: preah- ("sacred", cognate of the Indian word Brahmin) -mâha- (from Sanskrit, meaning "great", cognate with "maha-" in maharaja) -ksat ("warrior, ruler", cognate of the Indian word Kshatriya).

On the occasion of HM King Norodom Sihanouk's retirement in October 2004, the Cambodian National Assembly coined a new word for the retired king: preahmâhaviraksat (Khmer regular script), where vira comes from Sanskrit vi-ra, meaning "brave or eminent man, hero, chief", cognate of Latin vir, viris, English virile. Preahmâhaviraksat is translated into English as "King-Father" (French: Roi-Père), although the word "father" does not appear in the Khmer noun.

The legislature comprises a 61-member appointed Senate and a 123-member lower house, the National Assembly, elected under proportional representation by popular vote for 5 year terms. The judiciary is very weak, since only a handful of lawyers and judges were left alive, the rest being killed during the rule of the Khmer Rouge.

The CPP came out on top during the 1998 elections, and formed a coalition with FUNCINPEC, Ranariddh's royalist party, but with Hun Sen as sole prime minister.

In the 2003 National Assembly elections, the CPP won 73 seats with 47% of the vote, the opposition party, the Sam Rainsy Party, won 24 seats (22%), and FUNCINPEC won 26 seats (21%). Eleven women were among those elected. Following a year long deadlock during which FUNCINPEC and the Sam Rainsy Party united to oppose the CPP, and thus prevented it from forming a government, FUNCINPEC switched sides and joined with the CPP, allowing it to control the two thirds of the seats in the National Assembly needed to form a government.

The most distinctive geographical feature is the lacustrine plain formed by the inundations of the Tonle Sap (Great Lake), measuring about 2,590 square kilometers (1,000 sq. mi) during the dry season and expanding to about 24,605 square kilometers (9,500 sq. mi) during the rainy season. This densely populated plain, which is devoted to wet rice cultivation, is the heartland of Cambodia. Most (about 75%) of the country lies at elevations of less than 100 meters (330 ft) above sea level, the exceptions being the Cardamom Mountains (highest elevation 1,813 m / 5,948 ft) and their southeast extension the Dâmrei Mountains ("Elephant Mountains") (elevation range 500-1,000 m or 1,640–3,280 ft), as well the steep escarpment of the Dângrêk Mountains (average elevation 500 m / 1,640 ft) along the border with Thailand's Isan region. The highest elevation of Cambodia is Phnom Aoral, near Pursat in the center of the country, at 1,813 meters (5,948 feet) above sea-level.

Temperatures range from 10°C to 38°C (50°F–100°F) and Cambodia experiences tropical monsoons. Southwest monsoons blowing inland bring moisture-laden winds from the Gulf of Thailand and Indian Ocean from May to October, and the country experiences the heaviest precipitation from September to October. The northeast monsoon ushers in the dry season, which lasts from November to March, with the driest period from January to February.
[edit]

Despite the recent progress, the Cambodian economy continues to suffer from the effects of decades of civil war and internal strife. The per capita income is rapidly increasing, but is low compared with other countries in the region. Most rural households depend on agriculture and its related sub-sectors. Rice, fish, timber, garments and rubber are Cambodia's major exports, and the United States, Singapore, Japan, Thailand, Hong Kong, Indonesia and Malaysia are its major export partners.

The population lacks education and productive skills, particularly in the poverty-ridden countryside, which suffers from an almost total lack of basic infrastructure. Fear of renewed political instability and corruption within the government discourage foreign investment and delay foreign aid. The government is addressing these issues with assistance from bilateral and multilateral donors.
[edit]

Cambodia is ethnically homogeneous, as more than 90% of its population is of Khmer origin and speaks the Khmer language, the country's official language. The remainder include Chinese, Vietnamese, Cham and Khmer Loeu.

The Khmer language is a member of the Mon-Khmer subfamily of the Austroasiatic language group. French is spoken by many Cambodians as a second-language and is often the language of instruction in various schools and universities. Cambodian French is a dialect found in Cambodia. It is also frequently used in government. However, in recent decades, many younger Cambodians, as well as members of the business-classes, have favored learning English and it is gradually becoming more widely-known.

Theravada Buddhism, suppressed by Khmer Rouge but now revived, is the main religion, but Christianity is spreading in the country.
[edit]

Khmer culture, as developed and spread by the Khmer empire, has distinctive styles of dance, architecture and sculpture which have strongly influenced neighbouring Laos and Thailand. Notable recent artistic figures include the singers Sinn Sisamouth, who introduced new musical styles to the country, and later Meng Keo Pichenda.

Bonn Om Teuk (Water Festival), the annual boat rowing contest, is the biggest Cambodian holiday. The festival is held at the end of the rainy season when the Mekong river begins to sink back to its normal levels. Approximately 10% of Cambodia's population attends this event each year. Popular games include kicking a sey, which is similar to a hacky sack, cockfighting and soccer.

Rice, as in other South East Asian countries, is the staple grain, while fish from the Mekong and Tonle Sap also form an important part of the diet. The Cambodian per capita supply of fish and fish products for food and trade in 2000 was 20 kilograms of fish per year or 2 ounces per day per person. [9]. Some of the fish can be made into prahok (a Khmer delicacy) for longer storage. Overall, the cuisine of Cambodia is similar to that of its Southeast Asian neighbours. The cuisine is relatively unknown to the world compared to that of its neighbors Thailand and Vietnam, but has been described not as spicy as Thai cuisine and similar to other Southeast Asia cuisines.

Customary Cambodian teachings include: that if a person does not wake up before sunrise he is lazy; you have to tell your parents or elders where you are going and what time you are coming back home; close doors gently, otherwise you have a bad temper; sit with your legs straight down and not crossed (crossing your legs shows that you are an impolite person); and always let other people talk more than you.

Khmer culture is very hierarchical, in that the greater a person's age, the greater the level of respect that must be granted to them. Everyone in Khmer culture is given a hierarchical title before the name - in some cases names are shortened with the title added before the name is given - which varies in relation to the person. In some cases elders are referred to by a family title even though there is no relation, out of respect to their seniority in life. Referring to someone by the improper title is a sign of disrespect and would be assumed as improper parenting or a lack of respect for elders.
[edit]

The civil war severely damaged the transportation system, despite the provision of Soviet technical assistance and equipment. Cambodia has two rail lines, totalling about 612 kilometers (380 mi) of single, one meter gauge track. The lines run from the capital to Sihanoukville on the southern coast, and from Phnom Penh to Sisophon (although trains often run only as far as Battambang).

The nation's extensive inland waterways were important historically in domestic trade. The Mekong and the Tonle Sap River, their numerous tributaries, and the Tonle Sap provided avenues of considerable length, including 3,700 kilometers (2,300 mi) navigable all year by craft drawing 0.6 meters (2 ft) and another 282 kilometers (175 mi) navigable to craft drawing 1.8 meters (6 ft). Cambodia has two major ports, Phnom Penh and Sihanoukville, and five minor ones. Phnom Penh, located at the junction of the Basak, the Mekong, and the Tonle Sap rivers, is the only river port capable of receiving 8,000 ton ships during the wet season and 5,000 ton ships during the dry season.

The country possesses six commercial airports: Pochentong International Airport near Phnom Penh is the largest, while the others are at Siem Reap, Battambang, Mondulkiri, Ratanakiri, and Stung Treng.

The locals normally use automobiles, motorbikes and buses. Cycle rickshaws ("cyclos") are an additional option often used by visitors.
[edit]

Cambodia has diplomatic relations with most countries and is a member of most major international organizations, including the United Nations and its specialized agencies such as the World Bank and International Monetary Fund. Cambodia is an Asian Development Bank (ADB) member, a member of ASEAN, and joined the WTO on 13 October 2004. In 2005 Cambodia attended the inaugural East Asia Summit.

The country has several border disputes with its neighbours, including disagreements over some offshore islands and sections of the boundary with Vietnam, and undefined maritime boundaries and border areas with Thailand.

In January 2003, there were riots in Phnom Penh prompted by rumored comments about Angkor Wat by a Thai actress wrongly attributed by Reaksmei Angkor, a Cambodian newspaper, and later quoted by Prime Minister Hun Sen[10]: the Thai government sent military aircraft to evacuate Thai nationals and closed its border with Cambodia, while Thais demonstrated outside the Cambodian embassy in Bangkok. The border was re-opened on March 21, after the Cambodian government paid $6 million USD in compensation for the destruction of the Thai embassy and agreed to compensate individual Thai businesses for their losses.
[edit]

The tourism industry is the country's second-greatest source of hard currency after the textile industry [11]. More than 60% of visitor arrivals are to Angkor, and most of the remainder to Phnom Penh [12]. Other tourist hotspots include Sihanoukville (Cambodia's only port), which has a popular beach, and the area around Kampot including the Bokor Hill Station.

The Angkor Wat temple complex is the best preserved example of Khmer architecture. Angkor means "city" and Wat "temple". Out of bounds to tourists during the civil war, it gained particular worldwide attention after featuring in the 2001 movie Lara Croft: Tomb Raider. The Bayon, also at Angkor, is located at the center of Angkor Thom. It has 54 towers, each bearing four smiling faces.

Many tourists also visit the Tuol Sleng Museum, the infamous prison of the Khmer Rouge, and Choeung Ek, one of the main Killing Fields; both display photographs, skulls and bones of victims of the autogenocide. Cambodia is also a major destination for sex tourism, and there is particular concern over child sex and forced prostitution [13].

This story has been posted in the following forums: : Headlines; COS - Cambodia; Expansion