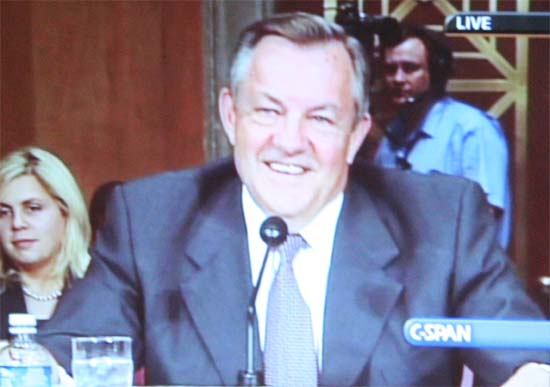 Asked how his business background might come into play in his new job, Tschetter said, "I think as a former executive, managing companies with shareholders and numerous employees, I'm aware of the need for the agency to be held accountable and show measurable results." Ron Tschetter is the seventeenth Director of the Peace Corps. He served as a Peace Corps Volunteer in India in the 1960's.

Washington -- Time goes by quickly, new Peace Corps Director Ron Tschetter acknowledged as he recently reflected on the 40 years between his volunteer service in India and being named by President Bush in September to head the 7,700-member volunteer agency.

During that time, the South Dakota native used many of the management tools and interpersonal skills he learned as a volunteer overseas to build a successful career in the financial-investment sector, ultimately becoming president of D.A. Davidson & Co., one of the nation's largest full-service investment firms.

Now his main challenge, Tschetter says, is to make the corps more "relevant to the 21st century."

The Peace Corps saying that "'you get more than you give as a volunteer' still remains true," Tschetter told USINFO reporters after returning in November from his first official visit, reviewing volunteer programs in Morocco and Jordan.

The goal of partnership with local peoples -- to build more prosperous, democratic societies -- that inspired more than 187,000 volunteers to serve after President John F. Kennedy established the Peace Corps in 1961 remains "exactly the same," he said.

Tschetter said he was passionate about the Peace Corps when he and his wife, Nancy, volunteered as health workers living and operating out of Bori, a small town in southern India, from 1966 until 1968. "We helped battle smallpox among nomads in Maharashtra state along with Lillian Carter, whom we got to know quite well."

Carter, a volunteer in her 70s, was the mother of President Jimmy Carter. "She had been trained as a nurse, and all the people just loved her for her simplicity and genuine caring attitude," Tschetter said.

The director said he is just as passionate today as he was in the 1960s, but his emphasis now is to help the Peace Corps fit into a changing world.

TAPPING THE TALENTS OF OLDER AMERICANS

As a start, Tschetter wants to bring more "baby boomers" -- people born after 1945 -- into the corps to share their skills and life experiences. "This is a pool of 75 million mature people, many of whom have traveled and are familiar with other cultures. They are basically healthy and many have good retirement benefits. They represent a lot of passion to serve and give back that is untapped."

With that in mind, he said: "We have a very successful program in Mexico composed of 40 volunteers, many of them engineers who work on environmental projects. Their average age is 47 -- with the oldest volunteer 78 -- compared to 27 for our other volunteers." As it stands now, "over 5 percent of our volunteers are over 50."

Tschetter said his next trip would be in mid-December to Mexico, where he will swear in the latest group of volunteers to serve as development partners with America's southern neighbor.

Asked how his business background might come into play in his new job, Tschetter said, "I think as a former executive, managing companies with shareholders and numerous employees, I'm aware of the need for the agency to be held accountable and show measurable results."

Tschetter said the Peace Corps has achieved that goal, especially in its HIV/AIDs programs, to which 2,880 volunteers are devoting their time and energy. "We've already established 85,000 training centers on AIDS that have "touched 1 million people" with quantifiable results, he said.

REACHING OUT TO MUSLIM COUNTRIES

The new director said he will continue to focus on adding more volunteers in Muslim countries. "We are in 14 now -- countries with at least 40 percent Muslim populations -- and expect to add more down the road. A number of very large Muslim countries have come to us and we are open to such opportunities."

Tschetter said Morocco, where he just visited, is an example of a very long and fruitful Peace Corps partnership. "We have been there for 43 years and our volunteers -- who work as teachers, small business development advisers and on environmental projects -- have built very important and lasting relationships with communities there."

Peace Corps has been in Jordan for 10 years and many of its current 53 volunteers there work on programs for children with special needs, Tschetter pointed out. On his recent visit, he said, he met with the king, queen and officials who said they would "appreciate an expansion of the Peace Corps in their country."

Tschetter added that the corps also would have volunteers in Cambodia -- by February 2007 -- and in Ethiopia, which had one of the largest Peace Corps contingents before civil war and security concerns saw them removed. Currently, the largest group of Peace Corps volunteers -- 350 -- serves in Ukraine.

"This organization is just awesome. I'm so impressed with the dedication and passion of its people. It's a real honor and privilege to serve as its 17th director," Tschetter concluded.