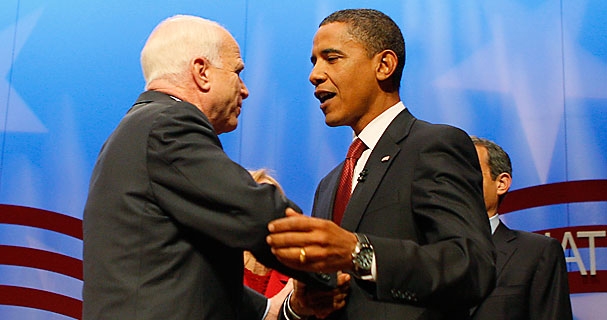 McCain advocates making sure the American message, and our "positive image" gets to foreign publics; Obama advocates forging a dialogue with foreign publics to create a joint narrative about a shared future. McCain believes the United States leads by moral fiat based on its intrinsic leadership role; Obama believes the United States should lead by the example of its own behavior. McCain has said that cross-cultural knowledge can be weaponized to undermine violent extremists; Obama has suggested by example that cross-cultural knowledge can be used to understand and address societies where extremism has taken hold. McCain is into telling; Obama thinks we should listen first.

Since 2003, international polls have consistently revealed worldwide distaste for American foreign policy in the Middle East; the Bush Administration's "war on terror"; the Iraq war; and the American disregard for international conventions regarding detainee treatment. In combination with recent concern among foreign publics that the United States adversely affects their own national economies, these views amount to the collapse of America's reputation around the world.

Despite the clarity with which foreign publics express their reasons for the downgrade, we Americans have, until recently, been bewildered by our loss of stature. We continued to wonder "why they hate us" and to assert our general good will in the world. To an extent, it's no wonder we've been puzzled: mainstream media tends to short-circuit the context of global news, and censor the American role in foreign disquiet. Add to this an administration that intentionally feeds only "good news" stories to both domestic and foreign presses, and a five second cut of angry foreigners burning American flags on the nightly news definitely presents as a non sequitur.

But recent polls of Americans on our own reputation abroad show we're catching on. We have made the connection between foreign perceptions and our own ability to thrive in the foreseeable future. A poll completed at the end of August by the United Nations Foundation and its associated organization, the Better World Campaign, revealed that 78% of American voters "believe that America's reputation has suffered in the world" and that the issue should be addressed.

A World Learning/ Aspen Institute poll in January 2008 showed we perceive concrete repercussions for a bad reputation, including a weakened ability to gain support for diplomatic and military goals among foreign governments, and a heightened risk of terrorist attacks. Eighty eight percent of those polled said it is "very important" that others view Americans in a good light.

The presidential candidates know there is a problem too. McCain observed at the end of 2007 that, "the United States is more unpopular now than at any time in history and increasingly viewed as pursuing its narrow self-interest." For McCain, those who hold such views are flat out wrong. But he concedes that, "it is incumbent upon us to ... rebuild those damaged relationships...." Obama lays blame for the faltering national reputation at the feet of the Bush Administration. But he too, stresses the need to "rebuild[ ] our alliances to meet the challenges of the 21st century"

High-flown rhetoric about winning "hearts and minds" is easy; concrete programs that would measurably improve how others view the United States are more challenging. Nevertheless, both presidential candidates have put forth several concrete actions they will take to improve the American position. Their platforms can sounds similar--both recommend revitalizing public diplomacy, for example

Yet a close look reveals a basic difference in how each candidate envisions communication. McCain advocates making sure the American message, and our "positive image" gets to foreign publics; Obama advocates forging a dialogue with foreign publics to create a joint narrative about a shared future. McCain believes the United States leads by moral fiat based on its intrinsic leadership role; Obama believes the United States should lead by the example of its own behavior. McCain has said that cross-cultural knowledge can be weaponized to undermine violent extremists; Obama has suggested by example that cross-cultural knowledge can be used to understand and address societies where extremism has taken hold. McCain is into telling; Obama thinks we should listen first.

Regardless of the appeal of either or both messages, the multi-vocal, transnational communications environment in which we all live is such that Obama's dialogic approach has a more realistic chance for succeeding. The days have passed when the U.S. could claim singular moral authority, or command enough airwaves, to simply silence competing points of view. It has little choice but to listen, if it wants its reputation back.

Intended to communicate American seriousness about combating terrorism when it was established, Guantanamo Bay has instead become a standing symbol of a Kafkaesque doctrine that is alien to democratic ideals and international laws. It reminds the world that the United States, like the undemocratic governments it deplores, practices indefinite detention and torture.

Both McCain and Obama recommend closing the facility and, with it, closing down one of the most visibly negative symbols of the American intentions toward others. Obama's reasoning relates to moral leadership: In March 2007, Obama told a Texas audience of his intention to "lead by example--by not just word, but by deed" by closing Guantanamo and restoring habeas corpus.

McCain reasoning on Guantanamo, although he has deplored torture in other contexts, relies less on condemning practices there than on the need to compromise in a multilateral world, in which, "our great power does not mean that we can do whatever we want, whenever we want."

Public diplomacy, broadly defined, is the government's direct communication with foreign publics, as well as positive communication between citizens of different countries. Both modes are designed to explain and promote U.S. positions. In 1998, the agency in charge of public diplomacy, the United States Information Agency (USIA) was closed, and its functions rolled into the State Department. There is currently no agency dedicated to public diplomacy, although there are a number of discussions in Washington afoot about what a new agency dedicated to communications with foreign publics might look like.

McCain believes that the 1998 decision to close USIA was wrong, and has promised to "work with Congress to create a new independent agency with the sole purpose of getting America's message to the world -- a critical element in combating Islamic extremism and restoring the positive image of our country abroad. "

Obama believes that efforts at public diplomacy in the Bush administrations State Department have been misguided and has promised to reignite public diplomacy efforts that recall the activities of USIA: "We will open "America Houses" in cities across the Islamic world, with Internet, libraries, English lessons, stories of America's Muslims and the strength they add to our country, and vocational programs."

Obama also wants to initiate an " America's Voice Corps" through which "we will recruit, train, and send out into the field talented young Americans who can speak with -- and listen to -- the people who today hear about us only from our enemies." Finally, he has offered to personally speak to a "major Islamic forum" in the first 100 days of his administration, and "redefine our struggle" to communicate to foreign publics that, "your future is our future."

Both candidates see the ability to communicate across cultures as an important aspect of combating violent extremism. McCain has committed rhetorically to educational exchange programs as part of a battle against "terrorist networks," noting that "scholarships will be far more important than smart bombs" as a way to win hearts and minds. In a Foreign Policy article at the end of 2007, McCain outlined a number of steps to enhance Americans' foreign cultures' knowledge, calling it "not a luxury, but a strategic necessity." His specific recommendations include installing foreign language programs in civilian and military schools, and linking greater understanding of foreign cultures to combat and intelligence aims. He has offered to create, for example, "a new specialty in strategic interrogation" so that interrogators could use "advanced psychological techniques" rather than pressure designated as torture by the Geneva Conventions.

In keeping with his recommendation that the United States lead by example, Obama has used his own cross-cultural knowledge to inform his counter-extremism platform. In an address in February 2008, Obama related his experience as a child in Muslim Indonesia. He analyzed the consequences of the 1997 Asian financial crisis, and Indonesia's subsequent vulnerability to aggressive Saudi aid practices that imposed a more strident version of Islam on the country.

As he related to his audience in February, Obama used this cross-cultural understanding as the basis for suggesting that the U.S. could improve its reputation among all but hardline jihadists by cracking down on Saudi human rights violations, investing in education and development in countries like Indonesia, and ensuring it adheres to its own best values.

This story has been posted in the following forums: : Headlines; Election2008; Public Diplomacy