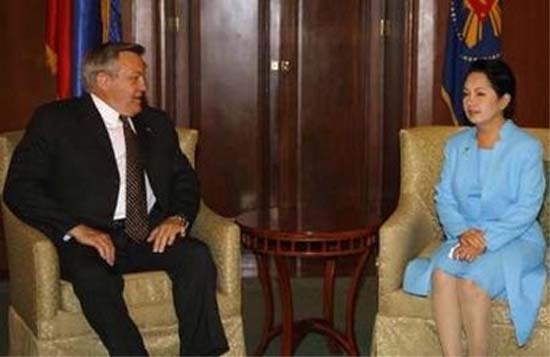 “I’m here to say, ‘Thank you,’” he told a small group of journalists, including representatives from The Manila Times. Tschetter met with President Gloria Arroyo on Wednesday and was scheduled to meet with Foreign Affairs Secretary Alberto Romulo on Thursday. The director will also visit the American volunteers before he leaves on the weekend.

Despite the ongoing conflict in Mindanao and the murder of an American volunteer in northern Philippines last year, the US Peace Corps remains positive about the country, its director said Thursday.

Director Ronald Tschetter said the Peace Corps has a 47-year history in the Philippines, which has hosted the most number of its volunteers.

“I’m here to say, ‘Thank you,’” he told a small group of journalists, including representatives from The Manila Times.

Tschetter met with President Gloria Arroyo on Wednesday and was scheduled to meet with Foreign Affairs Secretary Alberto Romulo on Thursday. The director will also visit the American volunteers before he leaves on the weekend.

More than 8,000 Peace Corps volunteers have served in the Philippines, since the program started in 1961, he said.

“That is the largest group of volunteers that have served in any country in the world,” Tschetter said, adding that this is significantly larger than the next-closest country, which hosted about 5,500.

There was a time when the Peace Corps suspended operations in the Philippines—between 1990 and 1992, because of communist threats.

Also, the Peace Corps has no presence in Mindanao now, but is practically everywhere else in the Philippines, Tschetter said.

But the program has had volunteers in Mindanao before, the last time in 2003, according to an official at the US Embassy in Manila.

Tschetter said that the April 2007 murder of Julia Campbell in Ifugao province “has not affected our opinion and our presence here in the Philippines.”

“It was a personal loss,” he noted, but it had no long-term impact, “other than the fact that we certainly do miss Julia.”

“Those are circumstances that happen, unfortunately,” said the director, who explained that safety and security is a very important issue for the Peace Corps around the world. “[But] we cannot protect them from everything.”

Juan Duntogan confessed to killing Campbell, but claimed it was not premeditated. He was later tried in court, found guilty of murder, and sentenced to life in prison.

The program is robust, according to Tschetter, who was a Peace Corps volunteer with his wife in India in the 1960s.

“We are at a 37-year high in the number of volunteers that are serving in the field today,” he said, adding that more than 8,000 are serving in 74 countries.

The program was created after then US President John F. Kennedy spoke to students at the University of Michigan, challenging them to serve America.

So far, about 190,000 volunteers have answered Kennedy’s challenge, serving in 139 countries since the program began.

Tschetter said the Peace Corps mission has not changed since the beginning – that is, to go to a country with some technical skill, bring the “face of America” abroad, and “bring back to America the face of the place we served in.”

“Clearly, there are more volunteers that are bringing back to America the face of the Philippines than any other country in the world,” he added.

Tschetter said that volunteer satisfaction in the Philippines is very high. Volunteers like serving here “because of the warmth of the people.”

“I think that stands out.”

Volunteers serve for about two years, receiving only an allowance. But afterwards, they are given $6,000, which they can spend on anything they want.

To join the corps, the applicant must be a US citizen and at least 18 years old. There is no upper age limit.

The oldest volunteer is 85, and the director said there is an 81-year-old woman who is training to serve in the Philippines. If she completes the training, she will officially become a Peace Corps member in November.

Tschetter said that shortly after getting married, he and his wife were challenged by the corps’ advertising pitch, which said, “It’s the toughest job you’ll ever love.” He added that he was not disappointed.

He said the friendships he made when he served in India still lasts today, and not a week goes by without him exchanging e-mail messages with his old friends.

Sonia Derencourt, the Peace Corps country director in Manila, was also a volunteer.

She chose the corps over medical school, she said, adding that she was sent to the Islamic Republic of Mauritania in northwest Africa, living there for nearly two years.

Like Tschetter, Derencourt said the Peace Corps was a life-changing experience – including the part where their group of volunteers were evacuated back to the US in 1991 when the Gulf War broke out.


When this story was posted in August 2008, this was on the front page of PCOL:

This story has been posted in the following forums: : Headlines; COS - Philippines; Diplomacy; Tschetter