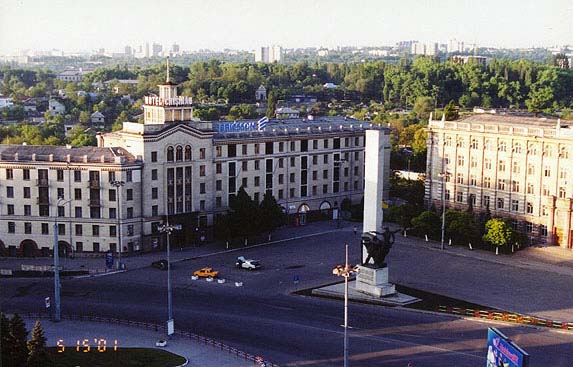 MISHICOT — It isn’t that winters in Moldova are colder than Wisconsin, it just feels like it because Moldavians don’t do much for heating their homes, said Rebecca Biely, a 1996 graduate of Mishicot High School and Peace Corps volunteer.

Biely, visiting her parents for a few days at their rural Mishicot home, will return to Moldova on Jan. 15 for her third winter there working in the Peace Corps as an agricultural business development volunteer. She began her tour in June 2002.

Biely, a graduate from the University of Wisconsin-Madison in Spanish and Latin Iberian Studies, said she isn’t positive how she found herself working as a business development volunteer in a country that was part of the Soviet Union as early as 1991, but she’s thrilled with the experience.

One of the chief languages spoken in the country, Romanian is based on Latin just like Spanish. As part of the former Soviet Union (as of 1940), “Russification” was pushed and many people now speak Russian. The other main groups there are Ukrainians, Bulgarians, Ga Gauz and Roma. Biely has learned Romanian and is now learning Russian.

Biely was the only American, to her knowledge, to have ever visited the village she worked in. The village had no running water, indoor toilets, indoor heating except for portable electric heaters, and experienced sporadic power outages which often causes her to wear long underwear in her home.

She walked to and from work (a 20-minute trek) and she has learned to appreciate the area’s idiosyncrasies and superstitions.

For example, Biely said a woman tossed Holy Water on her when she was believed to have received the evil eye from someone. Also, an odd number of flowers are always considered a proper gift except during funerals, when an even number is given.

“It takes a little getting used to,” she said, adding that she knows things could have been far worse.

father, Susan and Al Biely, visited their daughter recently. They both loved the country, but Susan was not quite as understanding of the outdoor toilets as her daughter.

Much of the nation is still very rural, and many households still make all their own milk, cheese and wine. Moldova was the chief wine production area for the former Soviet Union.

“You can smell the grapes in town,” she said.

One of goals of the Peace Corps, and Biely’s job, is to help farmers modernize their equipment and techniques, and build sustainable organizations and farming practices, she said.

The $150 a month stipend Biely receives for the work is far more than the $20 to $40 a month many school teachers make in Moldova, but it certainly won’t make her rich, and it isn’t something she can do forever.

Biely said she’d like to continue working abroad in a business development position. Her tour ends in September 2005.

This story has been posted in the following forums: : Headlines; COS - Moldova; Agriculture Business Development