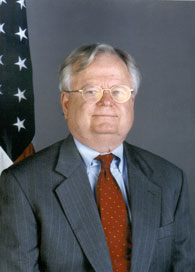 Now that National Security Council aide Robert Blackwill, President Bush's point man on Iraq, is leaving behind the rigors of government service, will he finally find time to purchase curtains for his Georgetown home? His neighbors, who tell us they've seen far too much of him while he dresses, sure hope so.

"We're not prudes. We're not hung up about the human body, but it's just common politeness to not present yourself naked to other people without their permission," says Francis Brooke, who lives with his wife and three kids in a townhouse across from Blackwill's. "It's a bit much. My daughter is 8 years old."

Another neighbor, who asked not to be identified, told us: "I've seen something that no man should see at 6:30 in the morning." He laughed. "I couldn't eat my breakfast."

Residents of the Cloisters development, near Georgetown University, have been getting an unfettered view of the 65-year-old Blackwill since he and his wife bought their two-story, $870,000 townhouse last fall. Blackwill, former U.S. ambassador to India, arrived at the White House in the summer of 2003 and helped establish the interim Iraqi government. He unexpectedly announced his resignation last week, removing himself from contention for a Cabinet post by saying he would pursue opportunities outside of government.

Blackwill was wrapping up work at the White House yesterday and our query about his curtainless windows was relayed to him. "We don't have any comment," an NSC spokesman said.

This story has been posted in the following forums: : Headlines; COS - India; COS - Malawi; Humor; Diplomacy; National Security