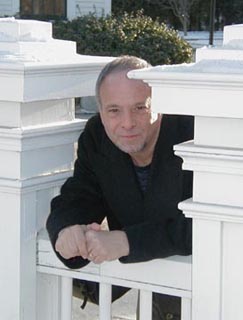 Ever since the birth of Levittown, finding meaning in a suburban existence has been an illusive and frustrating struggle for successive generations of Americans who have called a cul-de-sac "home."

The familiarity of identical houses, safe streets and endless playmates that is so delightful to youngsters can turn into resentment when adolescence hits. Far removed from the poverty of mean city streets and cutting edge art trends, many young men and women have come to believe there is more to life than a sheltered comfort zone and have set out to test the boundaries of that concept.

One Long Islander who did just that is Huntington poet George Wallace. A man who, 30 years ago, rejected his suburban Long Island upbringing to literally explore the world, Wallace, has come home and is now Suffolk County's first poet laureate. He brings to the position a wealth of experience, a well-honed instinct for the written word and the same sense of community spirit and involvement that has served him well the world over.

"I didn't become a published practicing poet until after many years of trial, trauma, travel and triumph," he says. "A suburban boy who doesn't grow up with experiences, damage or challenges needs to give vent to something deep and dark. I think a person with a creative drive at 25 who comes out of suburbia can become a faux artist or go out and experience the world and come back as a fully cognizant, deeply ingrained artist - then create. That's what happened to me."

Wallace, who has nearly a dozen volumes of poetry to his name, was appointed Suffolk County Poet Laureate through an act of the Suffolk County legislature in April 2003. His term runs through this April.

"I was so active in my first year, with both short term and long term goals, they gave me another year," says Wallace whose only defined official duty was to read a poem to county legislators on the first day of session. Given poetic license, as it were, to create the position as he saw fit, Wallace has chosen to do far more to advance the cause of poetry on Long Island than simply read a poem.

"Since 1988, I had been initiating and sustaining opportunities for creating outlets for Long Island poets," says Wallace. "In grad school in North Carolina, I was into community organizing in the field of health education. But ostensibly, the philosophy of community is one that applies itself to other venues. For anyone passionately pursuing an art, hobby or social cause, there is a community of interest. It's possible to apply the knowledge of how communities work to make it broader and more helpful. I've applied my knowledge of community to causes that advance poetry on Long Island."

This Saturday, January 22 at 6 p.m., George Wallace comes to Canio's Books in Sag Harbor (290 Main Street) to share a bit of his own work when he reads from his latest book of poetry, "Burn My Heart in Wet Sand," which was published this past year in England.

"I've always tried to be a fictional writer rather than a confessional writer," says Wallace in describing his work. "Through the surrealist poets of France and South America, I've learned the joys of the surrealistic investigation of the deeper truth."

"I'm sort of an ecstatic realist," he adds. "I don't want to overstate my message, but there's something spiritually ecstatic in our everyday existence and the interaction of relationships and culture. I think that's what I'm grasping at. I'm not an ideologically driven artist. I'm kind of driven by process to discover what my own ideology is."

Though he is renowned for his work both at home and abroad, by his own admission, Wallace was not a born poet, at least, not one who communicated through words. For him, that would come later.

"I was a musician as a child," explains Wallace, who grew up in Huntington. "I was reading music at the age of 4. The written word was not something that was part of my creative activity until I went off to college. I played R&B on the strip in Westhampton Beach as well as classical music."

"I think music is a fundamental human attribute that feeds into the creative arts - whether it is dance, sculpture, tennis or poetry," he adds. "For me, the music feeds into poetry."

Wallace's migration from music to words had its roots in logistics and was precipitated by the inconvenient nature of transporting his chosen musical instrument.

"I was an organist in high school and couldn't take the organ with me to college," says Wallace, who attended Syracuse University. "I tried guitar, but my fingers were not long enough. I did not have the sense I could accomplish much on it. So through writing I gave outlet to the creative expression that I had been giving to music."

At Syracuse, Wallace was indoctrinated into the world of poetry through mentors like W.D. Snodgrass and Donald Justice. "People who know poetry," he says .

Wallace was at Syracuse from 1967 to 1971. By that time, the Beat movement of the 1950s had morphed into a new poetic reality that consisted of a younger generation of poets who were inspired by the Beats but fed on an ample supply of current political source material.

"It was at the time of the flower power generation - hippies and the anti-war movement were all converging," says Wallace. "I think that if I had been 18 years old in 1954, I would've been spending time in coffee houses in Greenwich village with Kerouac and Ginsberg. But I grew up in the '60s. The first time I met Ginsberg, he had long hair and a long beard, was wearing robes and tripping merrily through America. He was no longer part of the hip Beat generation. Although the Beat movement continues to be important to this day."

Wallace is amazed at the amount of information available on the Internet about Jack Kerouac (who, incidentally, lived in Northport off and on between 1958 and 1964) and Allen Ginsberg and the loyal, young following these two poets still command. But as one who made the trip himself as a young man, Wallace can understand why going on the road has become a mantra for successive generations of youngsters raised in the shelter of suburbia.

"As long as people who have just gotten out of college want to explore their culture, nation and self in respect to others, they will set out on the road," says Wallace. "I traveled for 20 years before I came back to Long Island. I hitchhiked across the country to San Francisco. I lived in Boston, North Carolina, Texas and California. I joined the Peace Corps and went to Korea. My hidden agenda was to get to Europe, so I joined the Air Force and worked as a hospital administrator."

Wallace, who in addition to living in Korea traveled the land route between Asia and India has memories to last a lifetime -bouts with dysentery, riding on Afghani buses, being awoken at night by guards on the border of Turkey and Iran, and sleeping with the luggage on the roof of a third class train in India. And though he traveled as far from home as he possibly could, somehow in his desire to learn about foreign cultures, Wallace ended up understanding more of his own.

Ultimately, not only have his travels helped Wallace become the writer he is today, but they have also given him a perspective and wisdom that has allowed him to return to Long Island and a life that he initially fled.

"It took me a long time to come to terms with coming from suburbia," admits Wallace. "For a long time, I tried to deny it or eliminate it from who I was. I never thought I'd come back to Long Island."

"Then, in 1988 I came back for my parents," he says. "They were at the end of their lives and needed my help and support. I unpacked my bags in Huntington and established myself. I had enough life experience and healthy productive tendencies that I felt I could make it work."

Now that he is back on Long Island, Wallace is making the most of the title poet laureate, bringing to the position the same level of commitment that he brought to his work in every community where he has lived.

"I'm a multi-task person," he says. "In multi-tasking, I see my job as bringing to the public's attention Suffolk County and Long Island poets of the past, present and future."

Among them, Wallace notes, are Jupiter Hammon who lived during the 18th century and is considered to be the first published black poet in America, Walt Whitman, Kerouac and the late H.R. Hays, a professor at Southampton College.

"For poets of the present, I'm trying to develop venues and workshops in a contemporary way on Long Island," notes Wallace who works with local groups like the North Sea Poetry Scene to encourage today's writers.

"And the future is the students," he adds. "I've never been a teacher. I rarely appeared in classrooms, but through the good offices of others in schools, I went to colleges, high schools and elementary schools. In the course of two years, I've probably been to over two dozen schools to meet with students."

Perhaps it is through students that Wallace fulfills his most important function as poet laureate - encouraging untapped talent to create a new generation of poets. But just as adolescence triggers dreams of the world that lies beyond one's hometown, so, too, can stifle the creative energy of would be poets. Wallace thinks he may know why.

"Up until maybe junior high school to puberty, kids realize that word play is fun and a legitimate and pleasurable activity that they're not being judged or measured by," says Wallace. "It's just as magical as any other type of play, and there's not the sense that they have to earn it back because it's been taken away. They're also not worried about self-exposure and anxiety that teens have. They don't have an intellectual self doubt that they have to equal Byron to have their work worthy."

"In high school you go through a process of being exposed to great literature," he adds. "That is poetry to many people. By the time you're 18, you think it's an antique language in a form that is obscure and difficult to master. There's a loss of sense that everyone has a right to express themselves."

"It's like saying to someone, 'You don't have permission to sing, unless you're Enrico Caruso,'" adds Wallace.

"But there's nothing like a woman singing to her baby - I'd like to see Caruso beat that."

While the poet laureate position was created by an act of the county legislature, for Wallace, it transcends any notion of partisan politics.

"There's a community of interest," says Wallace. "It's not about the geography - we share a border of poetry and that makes us a nation. It's about what unites us rather than divides us."

"I will continue to organize and support others in the community," he adds. "I think everyone that tries to do it should do it in their own way."

George Wallace from Swimming Through Water

god makes a note to himself
things to permit to occur without interruption:
a bird in flight a child in prayer oceanspray windsong
the progress of the sun through day

the reappearance of fireflies in july

the mere mention of a flower

This story has been posted in the following forums: : Headlines; COS - Korea; Poetry