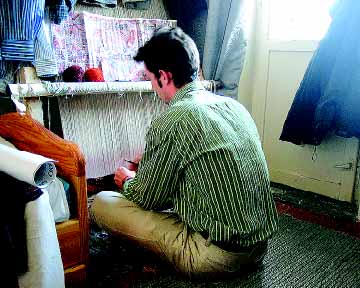 "Mahym had been told by the local government that she could not teach me how to weave Turkmen carpets anymore. That knowledge was a national secret and I was stealing it, someone at city hall had decided. That’s what it is like to live under one of the most repressive dictatorships in the world. The jailings and tortures and disappearances are relatively few and far between. But the fear is constant and the government is everywhere. Even at parent-teacher meetings and teen poetry clubs. Even in your home or your carpet weaving class."

ABADAN, TURKMENISTAN — Let me tell you how a nice boy who used to live on Charleston’s East End came to be accused of stealing a national secret from the isolated desert dictatorship of Turkmenistan.

It began one October morning while I was sitting in a chair built for a 10-year-old, my long legs jammed under a table of equal proportion, sweating, swatting flies with my notebook and trying to pay attention to my Russian teacher’s explanation of how to conjugate the verb “to live.” That’s when I noticed the two-foot-high loom, propped in a dusty corner of our borrowed classroom in the Children’s House of Creation in the town of Abadan.

I’d arrived in Turkmenistan about a month earlier to serve as a Peace Corps Volunteer, teaching people in this former backwater of the Soviet Union how not to get sick. I’d been told I would have a lot of free time on my hands at first. When I saw the loom, I decided I’d found a good way to spend it.

After another month of Russian classes, I managed to stammer my way through a plea to the House of Creation’s carpet weaving teacher, Mahym, to teach me her craft. She was a handsome middle-aged Turkmen woman with streaks of gray in her braided black hair and the smell of sweat, mutton grease and onions hanging about her clothes. I couldn’t understand her reply in Russian, but her gold-toothed smile told me yes.

So I began. Every day after lunch, I would walk to the House of Creation along Abadan’s dusty streets, passing rows of identical gray concrete four-story, Soviet-era apartment buildings. My route took me south toward the barren Kopet Dag Mountains that separated the town from nearby Iran, and then east, toward Turkmenistan’s capital, Asghabat.

Some days I would stop to watch men slaughtering sheep outside apartment buildings or women baking Turkmen flatbread — called “chorek” — in wood-fired ovens shaped like domes. Other days I would buy an ice cream cone at the town’s sleepy open-air bazaar. I would pass young men in dark suits squatting on curbs, eating sunflower seeds and spitting the husks into the gutter. I would nod to Turkmen women in long dresses with brightly embroidered necklines and modestly covered hair walking with Russian bottle-blondes in short skirts and high heels.

The House of Creation was where Turkmen girls went after school for their version of home economics classes. They learned to embroider those bright necklines onto their long dresses, crochet special socks called “cheshkas” to wear around their houses and weave carpets for their floors. And they watched me and giggled as I learned to read designs, work a loom and tie the thousands of tiny knots that make up a Turkmen carpet.

Sometimes other people would watch me, too. Often they had heard there was an American guy weaving a carpet at the House of Creation and wanted to see it for themselves. Some had never met an American before. All were surprised to find a man weaving a carpet. Turkmenistan is the kind of place where women weave the carpets and men just sit on them.

I worked cross-legged on the floor, always close enough to the window to catch some light. Even though Turkmenistan is rich in gas and oil, the power often failed. I would put in about two hours of work each day before my fingers got tired, my back sore and my eyes blurry. After about a month and a half, I passed my magazine-sized training carpet on to some of my 10-year-old classmates and set out to start a full-sized rug.

My first step was to spend a Saturday with a fistful of colored pencils and a stack of graph paper, copying the pattern from a scrap of carpet Mahym used to kneel on while she was weaving. Earth-toned and tattered, she said it was part of a rug that had been in the fortress at Geokdepe — a few miles up the road — during the 1881 battle between Russian soldiers and Turkmen warriors that ended Turkmen independence until the Soviet Union crumbled in the early 1990s.

Then I set out to buy a loom. I rode 45 minutes into Ashgabat packed into a minivan with 15 other people, watching out the window as cotton fields and vineyards, mosques and villages, solitary camels and herds of sheep, rolled by. A teenage soldier waved my minivan through the white marble and gold gate that arched over the highway at the edge of the capital after only a quick scan of the passengers’ faces.

I found a carpet factory among the city center’s many marble and glass government buildings. It was tucked below the Arch of Neutrality, a tripod-like monument that towers over everything else in the city and is topped by a golden statue of President Saparmurat Niyazov the Great, which rotates so that it is always facing the sun.

Inside the factory, I found three women sitting on a blanket on the concrete floor of a room full of looms, drinking tea from bowls and tearing pieces from a loaf of choreck. One of them, Altyn, was 27 — the same age as me. She said she worked at the carpet factory 12 hours a day and then wove carpets at home for extra money.

Altyn couldn’t imagine why I would weave a carpet on purpose — and for free. But she introduced me to the in-house loom builder, who sold me a 6-foot-tall-by-3-foot-wide loom he’d welded out of what looked like scraps of pipe and bits of a metal bed frame. Including transportation back to Abadan, it cost me 250,000 manat — about $10.

I woke early the next Sunday and rode an ancient crank-started bus to the Tolkuchka Bazaar, a nondescript patch of dust and scrub where thousands of people gather each weekend to buy and sell everything from jeans and CD players to antique Soviet rubles and bits of pottery from one of the many ancient cities half-buried under the sands of the Karakum Desert.

Operating from a shopping list Mahym had written for me, I bought skeins of red, orange, black, brown, white and blue yarn, priced by the kilo — and a pastry to tide me over until lunch. Back home, winding the loose skeins into balls, I found I’d been taken. The insides of all the skeins of yarn were wet, making them heavier — and more expensive — than they should have been. Still, I was finally ready to get started.

At the House of Creation, Mahym and the girls were all smiles when I showed up with my pattern, loom and yarn. For about a month, I happily spent my afternoons working on my carpet, proudly showing it off and bragging about it to anyone who would listen. Then one day after I’d finished my work, Mahym quietly told me there was no longer room for me at the House of Creation — I couldn’t work there anymore.

Confused and a bit hurt, I lugged my loom and bag full of yarn through the streets of Abadan to my apartment. Mahym hasn’t talked to me since, but, in the indirect way that things are often done in Turkmenistan, she sent me a message through my Russian teacher.

Mahym had been told by the local government that she could not teach me how to weave Turkmen carpets anymore. That knowledge was a national secret and I was stealing it, someone at city hall had decided.

So from then on, I wove my carpet alone in my room. I didn’t brag about it. I didn’t show it off. And when people in town asked me about it I lied and told them I had lost interest and quit.

In Turkmenistan, it’s best not to attract attention. Otherwise, the long arm of the government — often in the form of an agent from the KNB, which replaced the notorious Soviet KGB when the USSR fell — will reach out and smack you back into your place.

It’s a lesson I learned over and over again. When I tried to organize the community to fix the heating system at a local school, KNB agents killed the project by warning teachers and parents not work with me. After I started a poetry class for English students, KNB agents intimidated my 14- and 15-year-old students into dropping out. And every once in a while, a KNB agent would drop by to visit me at work or at home at 9 o’clock at night to check my documents and let me know he was still watching me.

That’s what it is like to live under one of the most repressive dictatorships in the world. The jailings and tortures and disappearances are relatively few and far between. But the fear is constant and the government is everywhere. Even at parent-teacher meetings and teen poetry clubs. Even in your home or your carpet weaving class.

Tranum is a former Daily Mail reporter and was a community health volunteer with the U.S. Peace Corps.

This story has been posted in the following forums: : Headlines; COS - Turkmenistan; Humor; Intelligence Issues; Weaving